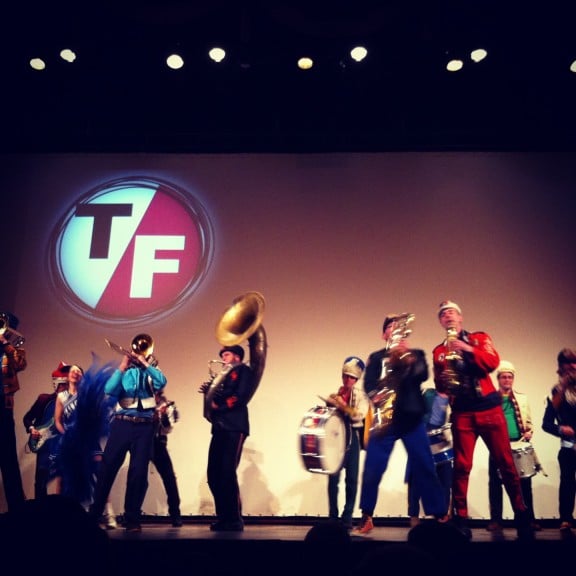 If I have an excuse for taking so long to post about the True/False Film Fest (February 28 – March 3 in Columbia, MO), it’s this: I just didn’t want it to be over. In its ten years of bringing the best documentaries (and kinda documentaries) to the heartland, True/False has created an army of fanatics who talk about the fest with fervor usually reserved for barbecue and college teams ’round these parts.

I attended last year and was converted to the event’s infectious spirit immediately. The fest is designed to break down the walls between filmmakers and film-goers. Each screening has a filmmaker Q&A, parties mix fans and documentarians, and the compact festival traffic patterns ensure you’ll run into the person responsible for that fantastic film you just saw in line for coffee or a slice of Shakespeare’s pizza. The fest also seems calibrated for filmgoers’ maximum happiness. “Buskers” serenade you while you wait for films to start, hundreds of friendly volunteers keep things running smoothly, and an ingenius “Q” system helps latecomers get into sold-out films.

And we haven’t even talked about the expert film curating yet. In two years, every single film I saw was worth watching. That’s a pretty incredible programming feat! Here are ten films I got to see at True/False 2013 that you should put on your to-watch list.

This shocking film follows reporter Jeremy Scahill’s investigation into the rapidly expanding kill list of the Joint Special Operations Command (JSOC). Puzzle piece by puzzle piece, Scahill assembles a picture of a covert war…one that targets an American citizen and his son.

The Stories We Tell

Canadian actor and director Sarah Polley peels away the layers of both her own family history and the objectivity of documentary filmmaking in this inventive film. Funny and poignant, this doc is a must-see.

As producer Daniel Dreifuss said at the screening, No is a feature film with a documentary soul. This Oscar-nominated film (Best Foreign Language Film) tells the story of the 1988 ad campaign that challenged Chilean dictator Pinochet’s claim to power. The film embeds old news footage and the actual television ads—in all their absurd glory—in a dramatic narrative shot on ’80s television cameras. Gael Garcia Bernal stars.

Family dairy farmer Stephen Hook struggles to keep his South England operation running and his small herd happy. If you grew up on a farm (like me), some of the scenes will elicit visceral memories (I could smell the manure). If you didn’t, you’re about to get an eyeful! When the Midwestern crowd around me gasped in horror at a bovine birth scene, I remembered just how few people had the, um, privileged upbringing I did. Which is precisely the film’s point. Both urbanites and rural-dwellers will enjoy this quiet and engaging film.

Twenty Feet From Stardom tells the stories behind the nameless voices we’ve been hearing our entire lives as backup singers become the stars of this music-packed film. Easily tallying the most goosebumps-per-minute of the fest, this doc had the audience applauding spontaneously and shivering with harmonic delight. The film will open in theatres on June 14. Go.

Who is Dayani Cristal?

This film follows the case of one unidentified body on the U.S./Mexican border to personalize immigration issues. In his second True/False appearance, Gael Garcia Bernal follows the footsteps of the John Doe as a forensic anthropology team at the Pima County Missing and Unidentified Persons Project solves the mystery of his identity.

This chilling investigation traces the life story of a trained orca, Tilikum, who has killed multiple times while in captivity. The film thoughtfully questions the disparity between “killer whale” behavior in the wild and under human care. I’m never going to Sea World again. Magnolia Films will be releasing this doc; I highly suggest seeing it in theatres.

Visually mesmerizing and uncompromisingly immersive, Leviathan takes you onboard a North Atlantic fishing boat. With cameras attached to fishermen, sunk into fish tubs, and strapped to poles, surging through waves and flocks of birds, the film forces you to see the ocean—and the machine riding it—in new ways. The directors have ties to Harvard’s Sensory Ethnography Lab and won the fest’s True Vision award for innovative filmmaking. Watch it if you have the chance; it’s stunning.

Which Way Is the Front Line From Here? The Life and Time of Tim Hetherington

Journalist and filmmaker Sebastian Junger creates a sensitive portrait of his Restrepo co-director Tim Hetherington, who was killed while reporting in Libya. Both a celebration of an amazing man and an exploration into the complexities of war reporting, Which Way Is the Front Line From Here was the fest’s True Life Fund recipient. With a matching grant from The Bertha Foundation, the fund will benefit Sebastian Junger’s Reporters Instructed in Saving Colleagues (RISC) program and Milton Margal School for the Blind, an organization Hetherington supported in Sierra Leone. You can donate here.