I was a tween and teenager in the 1990s. I remember Ryan White‘s funeral on TV (1990), I remember the AIDS quilt traveling the country, I remember Magic Johnson‘s announcement (1991), I remember getting a lot of AIDS education in school. I do not remember the  cultural and political struggles our country went through as it figured out how to fight the disease. I was too young and too naive.

By the time I reached the age of activism, the focus of the AIDS fight had shifted to getting medications to underdeveloped countries. I joined the grassroots lobbying group the ONE Campaign, and I helped convince the company I work for to partner with (RED), which promotes products that give back to The Global Fund to Fight AIDS, TB & Malaria. But while I participated in the movement to get AIDS medications to underserved areas, I didn’t understand how those drugs owed much of their existence to early AIDS activists in the U.S.—many HIV+ themselves. 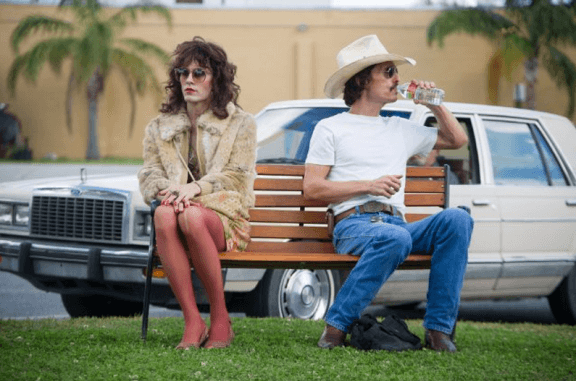 Enter Dallas Buyers Club, a fictionalized version of a true-life HIV+ cowboy, Ron Woodroof, who helped get life-saving (and illegal) medications to Dallas’s AIDS community. Directed by Jean-Marc Vallée (Young Victoria) and written by Craig Borten and Melisa Wallack, the film stars an emaciated Matthew McConaughey as Woodroof; Jared Leto as Rayon, his unlikely business partner; and Jennifer Garner as a sympathetic doc.

I was wary of this film because it could easily fall into the Noble-Majority-Hero-Saves-the-Poor-Minorities trope (see the well-documented White Savior cliché, popular recent examples being The Help and The Blind Side). In this case, Straight Savior Woodroof would save the gay community, hardest hit by the American AIDS crisis at the end of the 20th century.

After viewing, I think there are a few things that help keep the film from becoming simply a dismissible example of a Majority Hero film. For one, it’s just plain quality work. The acting, especially by McConaughey, is impeccable. Vallée’s directing is confident, and he moves the story along efficiently. Shot on a small budget ($5.5 million), the film used hand-held cameras and simple lighting, which gives it a more immediate aesthetic (the story of this person in this place at this time), instead of shooting Woodroof as a glowing epic hero.

Most importantly, Woodroof isn’t portrayed as noble at all. He’s a mess: homophobic, racist, misogynist, addicted. His efforts at getting better AIDS meds are purely motivated by self-interest. In the end, he becomes a better person only through his friendship with Rayon and the other people his medication helps. It’s a character arc that reminded me a bit of Schindler’s in Schindler’s List, actually.

Are these things—acting, directing, non-nobility—enough to overcome a potentially troubling story focus? I don’t know. I’ll point you to Indiewire’s Peter Knegt’s insightful review about these concerns that’s well-worth the read, especially if you’re new to thinking about this Majority Hero storytelling problem.

I can tell you this: In a short 117 minutes, this straight-white-middle-class woman was introduced to some of the main issues of the early fight against AIDS in the U.S. Dallas Buyers Club‘s greatest triumph might be that it left me wondering: What really happened? 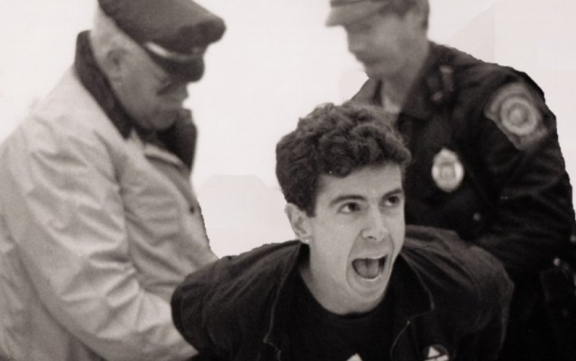 And so I turned to a film I’d heard good buzz about at the 2012 True/False Film Fest: How to Survive a Plague. Directed by David France and streaming on Netflix, the documentary tells the story of Act Up, a NYC-based organization of self-educated AIDS activists (many infected themselves). Act Up created a buyers club, pushed research agendas, fought for changes in FDA processes and regulations, and led the charge toward the medications that eventually allowed HIV+ people to live long, “normal” lives. This non-Hollywood lens highlights the collective, minority-led, contested, complex nature of the struggle against AIDS. I highly recommend it as follow-up watching to Dallas Buyers Club. As proof that the real story can be more compelling than retellings: This doc made me cry. Dallas Buyers Club didn’t.

Have you seen Dallas Buyers Club? What did you think?

0 comments on “The American AIDS Crisis Through Two Lenses”