An Ode to the Comforting Powers of Downton Abbey

Oh, friends. It has been a hard week. In the small frustrations category, I learned I couldn’t unpack or live in my new place for another week until the painter is finished. Technically I could live there, but I’d be dodging paint spray and living out of tarp-covered boxes. So I packed a nomad bag and moved all my stuff in the new place…in easily-cover-able piles in the middle of the floor.

And in the realm of big heartbreaks, my grandpa passed away from complications from Alzheimer’s. He’s been struggling with the disease since I was a teenager. I’m so glad that he’s no longer trapped in a failing body and confused mind. But it’s still hard to say goodbye to such a compassionate, principled man. The visitation and funeral were bittersweet: I got to see family I hadn’t seen in years, be with my twin sister and her incredibly sweet kids and husband, and hug my much-loved younger cousins. And hugs were needed. My Uncle Jay, my grandpa’s oldest son, passed away just a month ago (he was battling MS). My family’s share of sadness has come all at once this season.

No movie or book or story can change the reality that life is hard and saying goodbye is painful. But they can help ease the transition back into “normal” life and provide an escape from grief, which is too exhausting to face without interruption. Which bring us to Downton Abbey. 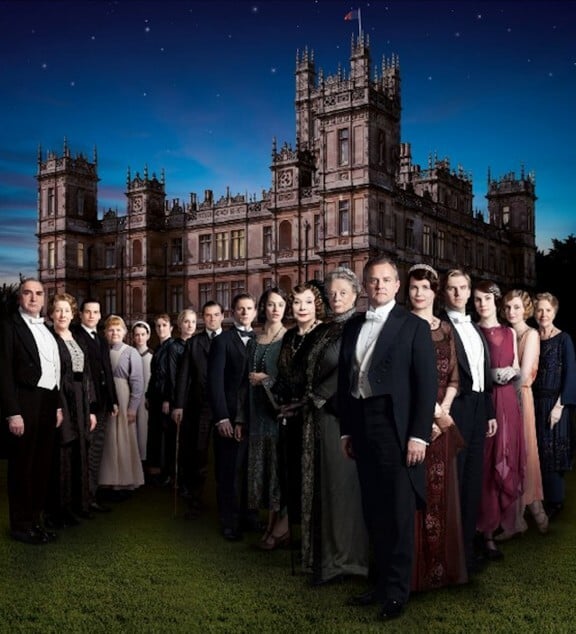 Yesterday my mom and I settled in front of my laptop to watch the first season of the Masterpiece Classic series. She had seen some of the current season (3), but hadn’t watched the first two. I had been looking for an excuse to re-watch the series, so there we were. We had popcorn, veggies, blueberries and tea at the ready, with later breaks for toast and strawberry jam (me) and graham crackers and chocolate frosting (her). Why are the Granthams, Crawleys and their staffs so soothing? For one, it’s a completely different world than mine. In hard times, it’s nice to trade in familiarity for the novel. The storylines are the perfect balance of over-the-top soap and underplayed British wit, thanks to the show’s creator Julian Fellowes (the writer behind one of my favorite Altman films, Gosford Park). The multitude of characters all have their own challenges and complexities, making for an engrossing and (seemingly) endless web of problems that are nothing like mine.

But everything like mine. At its heart, Downton Abbey deals with the drama of being a family, whether it’s one thrown together by work (downstairs) or inheritance (upstairs). The show’s themes of family loyalty, dealing with change, and living with honor play at a distance just remote enough to relate to without ripping into fresh real-life wounds. I think that’s why it works as a way to while away a sad snow day or two.

What stories do you escape to when real life gets a little too hard to bear?

Remember there’s only one day left to enter to win a 6-month Netflix streaming subscription!