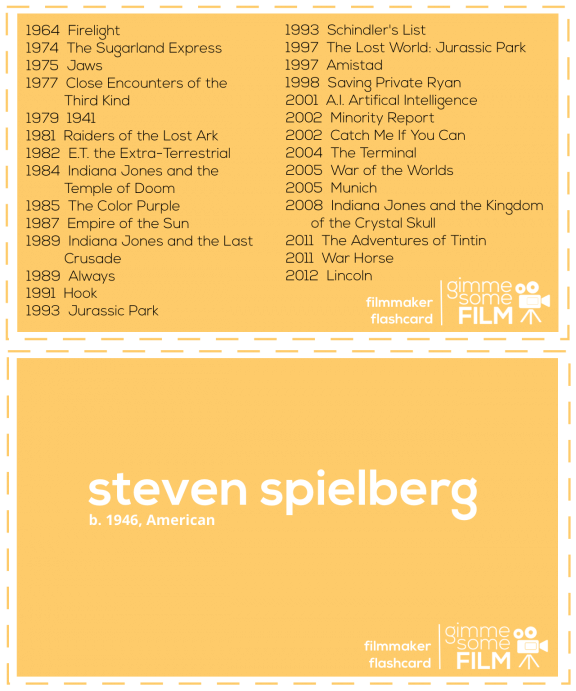 My friend Michelle once said that she wanted movie director flashcards.

I’ll regularly post flashcards here that you can print, cut out and glue to 3 x 5 note cards (if you really want to). Or you could just enjoy looking over the span of one filmmaker’s work and put a few of his or her films in your to-watch list.

I’m starting things off with Mr. Spielberg, in honor of the opening of Lincoln today. And because I’ve gotten to re-watch both Jaws and Jurassic Park in special theatre showings this year and had such a purely good time. I need to go back and fill in my Spielberg gaps (Firelight, The Sugarland Express, 1941, The Color Purple (I know, I know), The Adventures of Tintin and War Horse.)

Many books have been written about the influence Spielberg has had on cinema, but I just want to say two things.

1. He is the definition of an assured storyteller. Think about how you feel at the beginning of a Spielberg film, whether he’s transcending genre (Jaws, Close Encounters of a Third Kind, Indiana Jones, Jurassic Park, Minority Report) or illuminating history (The Color Purple, Empire of the Sun, Schindler’s List, Saving Private Ryan, Amistad, Munich, War Horse). I usually feel a sense of transportation, of being carried along an inevitable path, of being sucked into a world. That’s good storytelling, and it takes a whole lot of work, experience and skill to pull it off.

2. He’s the master of the iconic image. He is consistently able to sum up the emotional essence of a film in one memorable shot. E.T.‘s glowing finger reaching out to touch Elliott’s. The little girl in the red coat in Schindler’s List. The shark’s-eye view of a swimmer’s silhouette in Jaws. The velociraptor’s snorting breath fogging up the circular kitchen window in Jurassic Park. Shivers, people. Shivers.

Do you have a favorite Spielberg image, memory or movie?