{in theatres} Killing Them Softly 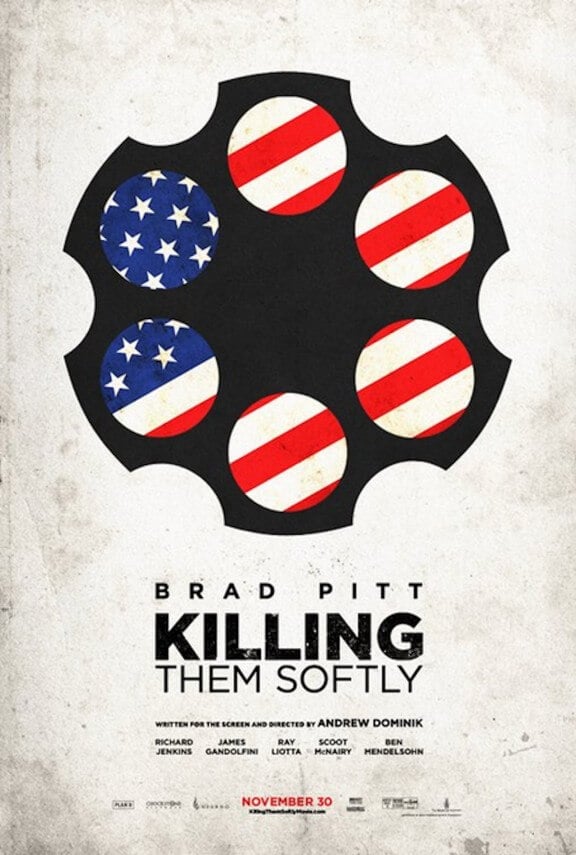 Brutal, bitter and brilliant, Killing Them Softly is cynically noir on the surface and subversively, angrily patriotic beneath. Director and screenplay adaptor Andrew Dominik  (The Assassination of Jesse James by the Coward Robert Ford) balances the two levels expertly, and cinematographer Greig Fraser (Snow White and the Huntsman, Let Me In) makes unforgiving beauty out of desolate cityscapes, cigarette smoke, blowing paper and exploding car glass.

The surface story (incompetent thieves hit an underground card game and a hired gun, Jakie, is brought in to get the criminal economy restarted) is underscored with scraps of radio and TV from the 2008 global financial crisis. I wouldn’t be surprised if the characters and plot parallelled key events and figures in that crisis; I’m not well-versed enough in economics to say for sure. But the feeling came over loud and clear: “This country is F—-d. There’s a plague coming,” in the words of Jackie (Brad Pitt). Only someone in love with the idea of America could be so furious over its reality.

Killing Them Softly is set in a hopeless world of terrible people. They curse, they steal, they shoot up, they kill. Women are just biological necessities and stories to tell later. Friends are just jobs or liabilities. The only scraps of humanity left in them are their coping mechanisms. “They’re all nice guys,” Jackie says, and maybe that’s true, because they have to try so hard to keep that nice guy quiet with booze, drugs and prostitutes.

Jackie is the most terrible of all because he’s the only one who doesn’t need a vice to survive. He dismissed his nice guy long ago. He sits, he watches, he waits, he aims with the cool of a man who’s bent on taking a faulty premise to its logical, hellish conclusion. When he spits out the film’s searing last lines—in a flag-draped bar with Obama’s 2008 acceptance speech in the background—he does it with an anger only a former believer in America could muster.

It’s to Brad Pitt’s credit that Jackie conveys considerable thematic information. The character that could have been all sunglasses and swagger in another actor’s shoes. Pitt has both acting chops and that ineffable movie star gravity: The ability to impart meaning while doing practically nothing. (Helpful in book adaptations where entire inner chapters need to be communicated with an eyebrow lift.) The man doesn’t need a lot of dialogue to tell you what you need to know. (Somebody should have told Chanel No. 5 that. Just sit him in in a chair, have him look at the camera for 15 seconds, and then show the perfume bottle. Sold.)

He seems to be using that gravity well lately, choosing roles that put his larger-than-life quality to work telling big stories and asking big questions. He was wish-fulfillment American vengeance in Inglorious Basterds. He stood in for all fathers of all time in The Tree of Life. And here he’s Amoral Capitalistic Justice, introduced ironically with Johnny Cash’s “The Man Comes Around.”

It’s because of that myth-making ability—and the long, slow burn of the story—that Pitt’s Jackie earns the right to close out the show with an indictment of America’s heartlessness. “I like to kill them softly, at a distance. I don’t like feelings,” he says earlier. It takes one to know one.

Do you have a favorite multi-level movie?

4 comments on “{in theatres} Killing Them Softly”