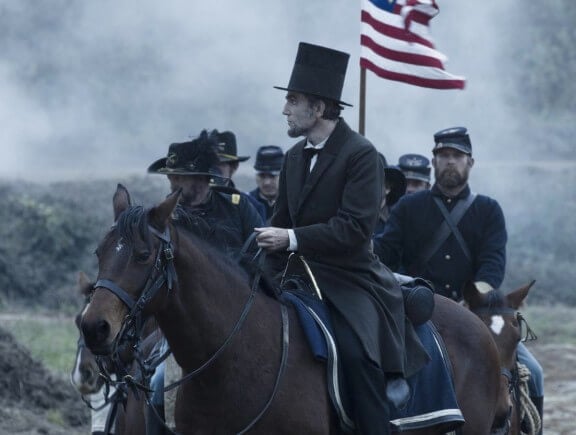 If there’s one thing you should know about 1865, it’s this: That dark year was really well lit. Gorgeous morning sunbeams streaming in the House of Representatives’ chambers, sun flares that sparkle over the horrors of a grave pit for soldiers’ amputated legs, profiles perfectly outlined by lamplight. 2012 has really got to step up its lighting game.

In other words, if you’re expecting a post-post-modern exposé with shocking revelations that scream that Everything You Thought You Knew About Lincoln Was Wrong, Dead Wrong! this is not the film for you. (I don’t know, maybe this is.) No, Steven Spielberg’s Lincoln is a reverent and expertly executed film about the man who cajoled, parable-d, lawyered and bribed the House of Representatives into passing the 13th Amendment.

Based on Doris Kearns Goodwin’s book Team of Rivals: The Political Genius of Abraham Lincoln , the Tony Kushner screenplay mostly takes place in January 1865. The film is essentially a legislative thriller, letting the political intrigue give the story structure and reveal the characters of the participants. Well-plotted, the screenplay clearly outlines the deadline for getting the necessary 20 votes remaining, then commences upping the stakes, both for the struggling nation and for Lincoln himself. (Through an interesting sequence of events, Sally Field‘s Mary Todd Lincoln goes from pleading with her husband to not to waste his power on the amendment to hissing at him, “If you fail to acquire the votes, woe to you, sir, you will answer to me.”)

The film creates real suspense, which is quite a magic trick considering we all had to memorize the ratification date of the 13th Amendment back in middle school. Yet I was holding my breath as the votes were being counted. You history buffs can tell me if the retelling was accurate; the one bit I suspected of being pure Hollywood, Wikipedia tells me is (SPOILER LINK FOR NON-HISTORIANS) true. My only structural quibble is that the film has three possible endings built-in, and I liked the second one best.

Going back to Sally Field, Lincoln is as solidly acted as it is written. Even with all the Oscar hype surrounding Daniel Day-Lewis’s performance, it was mere minutes before I forgot to watch the Brilliant Acting and just accepted, hey, that’s Lincoln. Which is the definition of Brilliant Acting itself. The film has a deep, deep bench of good, good actors, so I’m going to link to the cast list because you’re going to be checking it anyway. (In answer to your question, “Hey, isn’t that the guy from Pushing Daisies/Mi-5/Chronicle/Winter’s Bone/the Bourne movies?” Yes. Yes, it is.)

(A side acting note: The film contains some really quality crying by Day-Lewis,  Field, Joseph Gordon-Levitt, David Costabile, Gloria Ruben, and more. But the film is far from histrionic. Nicely played, thespians!)

As mentioned, Spielberg and his long-time cinematographer Janusz Kaminski make the Civil War era look absolutely gorgeous. Spielberg shows us both the iconic Lincoln (that immediately recognizable profile, the oft-silhouetted top hat) and the human Lincoln (curled up on the floor next to his youngest son, slowly and painfully pulling his lanky body out of chairs, habitually clasping his colleagues hands and tousling underlings’ hair). Lincoln seems most ordinary when trying to navigate his difficult relationships with Mary and his son Robert (Gordon-Levitt).

But Spielberg doesn’t seem interested in normalizing Lincoln. Instead, the film highlights his extraordinary political and moral achievement: ushering the 13th Amendment into being. This angle makes sense, given Spielberg’s body of work.

If Lincoln was the Great Emancipator, then Spielberg is our Great Encourager. Just like he told us that we don’t need a bigger boat if we’ve got a little courage, that our crazy visions aren’t so crazy, that the ledge will be there if we’ll only leap, I think with Lincoln he’s reminding us that we’re a country with moral victories worthy of beautiful back-lighting…and urging us to live up to them.

Good for: Fans of political intrigue and impressive acting

Bring your: Copy of the 13th Amendment

Skip if: You’re not into dialogue-heavy political drama

What did you take away from Lincoln?

6 comments on “{in theatres} Lincoln”