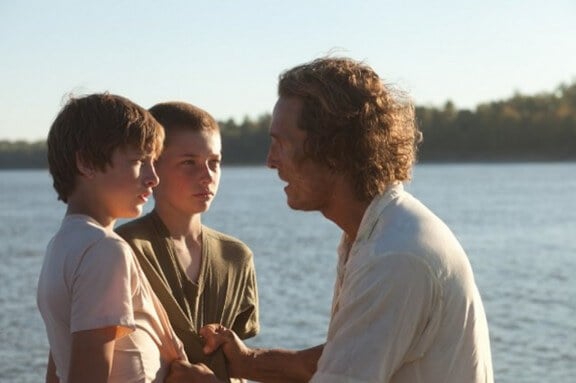 A nuanced coming of age story with a few epic bends, Jeff Nichols’s third feature, Mud, is both the story of every kid and this one kid: Ellis, played with remarkable vulnerability by Tye Sheridan, whom you might recognize from Tree of Life. Ellis is a 14-year-old river kid who faces troubles both common (crushes and domestic uncertainty) and uncommon (a sunburnt island-squatter—Mud—offers Ellis and his pal Neckbone a deal they can’t refuse).

I was struck how boy-like the boy-actors were, from their matter-of-fact capability navigating the river, to the wary way they watched adults for clues on how to navigate the much more tumultuous transition to adulthood. Newcomer Jacob Lofland adds humor as the blunt but ever-loyal Neckbone. Lofland and Sheridan weren’t acting like boys, they just were boys…which says a lot about these young actors’ talents and Nichols’s as well. (If you haven’t seen Nichols’s small-town, psychological thriller Take Shelter, do yourself a favor and download or rent it now.)

Not to be outdone by his tween co-stars, Matthew McConaughey’s character here is the upturned Arkansas river version of his old rom-com leads: dirty, glinting, with who-knows-what hidden under the currents. He plays the shifty dreamer Mud well, adding to the string of recent film-cred roles (Magic Mike, Killer Joe, The Paperboy, Bernie) that should keep the second act of his career going strong.

Many of Mud’s scenes were shot during the magic hour, with the glow used to light the actors’ expressive eyes. Nichols wisely lets those eyes do a lot of the film’s talking, as tempting as it would be to let the characters’ drawling dialect unspool unchecked. Nichols uses the same restraint to carefully place parallel story lines to add power to the film’s theme—love is big, messy and strong as that river—without overstating it. As tumbling and inevitable as its river setting, Mud rolls along, dragging you into its emotional undertow.

3 comments on “Mud: An engaging coming-of-age yarn from Jeff Nichols”