{new on dvd} Beasts of the Southern Wild 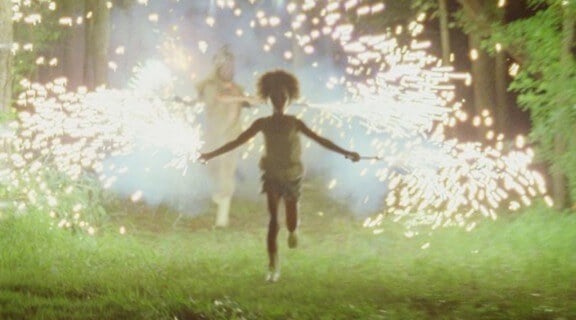 When one tries to learn how to write screenplays, one hears this bit of wisdom over and over again: Don’t write voice-over narration. Just don’t.

It’s generally good advice. Using a narrator can be a shortcut to avoid the hard work of figuring out how to show your story visually. Voice-over can get tedious fast. It can sound stilted. Just don’t.

In the case of Beasts of the Southern Wild, director Benh Zeitlin and his co-screenwriter Lucy Alibar wield that really sharp knife with razor skill. The film follows a 6-year-old girl, Hushpuppy, and her struggle to survive in The Bathtub, an exile community built outside the levee in a Southern bayou. We hear Hushpuppy’s inner monologue throughout the film. Here’s why I think it works:

1. The voice over does more than narrate the action we’re already seeing on screen.

2. The voice over has a reason to be.

Hushpuppy is not a talkative child…outside her head. She doesn’t keep a journal or have a best friend to confide in. She’s wary of the world and not quick to speak in front of others. We need the voice over to know what she’s thinking.

3. The voice over is authentic and in the unique voice of the character.

Part of this comes from a really fantastic script. But Zeitlin has also said that he spent a lot of time explaining the story to his first-time child actor Quvenzhané Wallis (who’s getting Oscar buzz, out of the gate), and hearing her tell it back to him. He and Alibar built her personality and speaking style into the script, ensuring that even when Hushpuppy gets deep, the lines still sound like they are coming from a real person, not a detached voice: “The whole universe depends on everything fitting together just right. If one piece busts, even the smallest piece…the whole universe will get busted.” 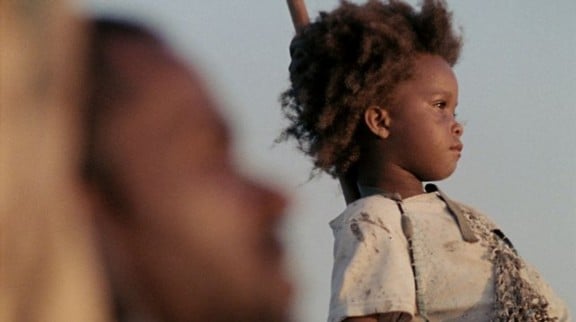 There’s a lot more that could be said about Beasts of the Southern Wild, so I apologize for getting all script-geeky on you. There’s the way Zeitlin keeps his naturalistic camera deep in Hushpuppy’s environment, so we feel both the magic and the claustrophobia of The Bathtub…Except when it’s revealing the world of the aurochs, creatures that are very, very real to Hushpuppy. And those special-effect aurochs have a physicality that movies with budgets 100 times the film’s rumored $1.8 million cost struggle to conjure. There’s Wallis’s undeniable charisma and the intensity of first-time actor Dwight Henry, who plays Hushpuppy’s father, Wink.

Yes, there’s a whole lot to recommend in this film…did I mention the voice-over writing is fantastic?

Good for: people who love triumphant stories with a strong sense of place

Invite your: friend you’d want to be exiled outside the levee with

Skip if: you have an aversion to voice over narration, no matter how well done

Do you have any favorite films that use voice-over narration well?

14 comments on “{new on dvd} Beasts of the Southern Wild”