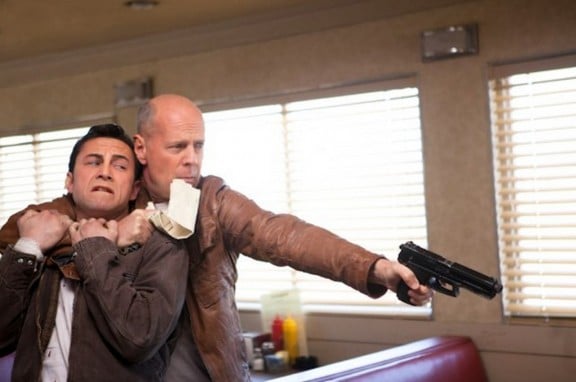 Start off 2013 by seeing the best action film of 2012 (feel free to argue with me in the comments, but I’m standing firm on this one). The inventive film, written and directed by Rian Johnson (Brick, The Brother’s Bloom) Looper follows the mind-bending journey of Joe (Joseph Gordon-Levitt/Bruce Willis), a hit man hired to kill people the mob sends back from the future. When the mob is done with a looper, they send the future looper back. The present-day looper then “closes the contract” (read: kills his future self) and is rewarded with a big “retirement” sum and the dubious honor of knowing exactly how he’ll die. At least that’s how it’s supposed to work. Joe’s contract closing doesn’t go as planned, and the resulting chaos makes him face questions of free will versus fate, self identity and self-sacrificing love.

Johnson balances the dizzying actions-and-consequences tightrope necessary for a satisfying time-travel film with a plot that rock-skips agilely over the depths without drowning in them. At one point, Older Joe quips, “I don’t want to talk about time travel because if we start talking about it then we’re going to be here all day talking about it, making diagrams with straws.” (SPOILER link). (Johnson has said that they actually did have a straw diagram sight gag in the film, but they edited it out.) Known for creating engrossing film worlds, Johnson sets up the rules of this one through interesting action and mise-en-scene dialogue, prepping you to understand plot implications later. 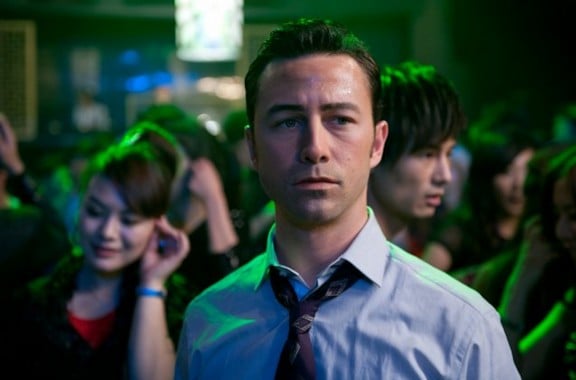 Much has been made of Gordon-Levitt’s makeup, and for good reason. Makeup artists Kazuhiro Tsuji and Jamie Kelman are on the Oscar short list for transforming Gordon-Levitt into a believable-looking younger Willis. But Gordon-Levitt shoulders the bulk of this transformation himself by subtly adopting Willis’s movements and inflections. Gordon-Levitt’s performance never comes off as an impersonation—more of an embodiment.

Willis himself reminds us why he makes such a great action hero: He’s unflinchingly physical, but he also conveys a whole lot of emotion while on the move. He’s a joy to watch here. And Emily Blunt? Stellar as always, as she brings vulnerability and depth to Sara, a woman with her own unique fears for the future.

Also of note: Nathan Johnson’s imaginative score that uses found-sound recorded on-set. Nathan is Rian’s cousin and did the scores for Brick and The Brother’s Bloom, too. Listen to Nathan talk about creating the score on NPR’s All Things Considered.

In Rian Johnson’s original notes for the film, drafted in 2002, the Bible verse John 15:13 plays a key role. Although the verse’s words didn’t make the final film, its message definitely does: “Greater love has no one than this: to lay down one’s life for one’s friends.” The deepness of this theme raises Looper from a simply fun ride to an adrenaline-fueled emotional experience.

Invite your: Time-travel geek buddy. Leave your friend who really, really loved 500 Days of Summer at home if she can’t handle the JGL face transformation.

Skip if: You get too caught up in the physics arguments for and against the plausibility of time travel to enjoy a great action film

What was your favorite action film of 2012?