{new on dvd} Sleepwalk with Me 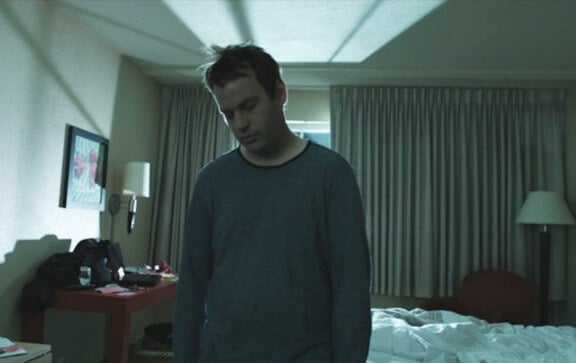 Last spring a couple of my comedy-savvy friends told me I had to go see Sleepwalk with Me at SXSW. A fictionalized account of one man’s real-life struggle with commitment and a rare sleep disorder, Sleepwalk with Me was getting nice reviews but wasn’t on the top of my list. Mike Birbigli-who? I asked. But once I settled in for this sweet comedy, it all came rushing back: Oh, he’s that guy.

If you’ve got comedy-savvy friends, too, you’ve probably been exposed to Mike Birbiglia’s self-depracating and vulnerable brand of storytelling sometime in the past decade. Maybe on Comedy Central , perhaps in his bit parts in Your Sister’s Sister,  Cedar Rapids, or Girls (season 1, episode 2). Or maybe the way I was introduced to him: Mike Birbiglia is a regular on the (best ever) radio show This American Life. I had heard parts of the film’s story before in episode 361: Fear of Sleep. In fact, I remember listening to it while I drove the I-29 stretch from Denver to my sister’s place in Fort Collins, hoping for bad traffic so I could hear the whole thing. (Ira Glass, This American Life‘s fearless leader shares a writing credit on the film, along with co-director Birbiglia, his brother Joe, and co-director Seth Barrish.)

We need the movie because it’s so freakin’ funny and sweet. Unlike previous incarnations, this Sleepwalk with Me gets a glaze of fiction on top of the true story. Mike is Matt Pandamiglio, a comic with the same relationship and sleep-disorder troubles as Mike. But Matt has a sister, not a brother. Timelines are compressed, characters are combined. The plot has the necessary structure to make a feature-length story flow, which is not necessary the structure real-life chooses for itself.

The film is held together with scenes where Mike/Matt looks directly at the camera and comments on the story so far. It’s this affable directness that has propelled Birbiglia’s stand-up career, and it’s what makes this film so approachable and lovable.

gimme five | Sleepwalk with Me

Good for: Fans of ambling and good-hearted relationship dramedies

Skip if: You need explosions (of fire, not laughter) to stay interested in a movie

Any Mike Birbiglia fans out there? Where did you first find him?