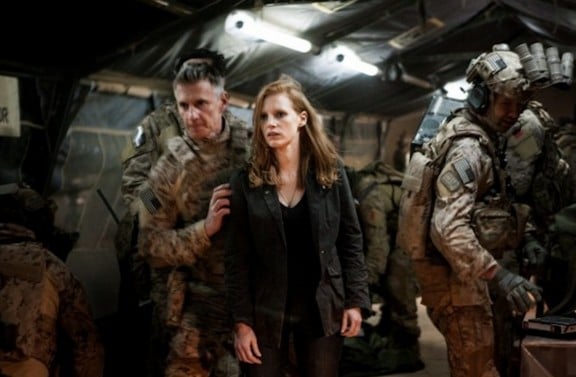 Do you have a favorite? If you’ve been reading the blog at all, you can probably guess who I’m cheering for in the Best Actress in a Leading Role race. Go ahead. Guess.

Did the picture give it away? Yep, my vote is on Jessica Chastain for Zero Dark Thirty, and the Golden Globes agree. To be fair, I haven’t seen Emmanuelle Riva in Amour or Naomi Watts in The Impossible yet, so I’m operating with less-than-complete information. It’s just hard to imagine anybody who could be better than Chastain as Maya. Unless it’s the born-to-do-this Quvenzhané Wallis (Beasts of the Southern Wild‘s child powerhouse) in a few years. Also wonderful was Jennifer Lawrence in Silver Lining’s Playbook…but Chastain gave the too-beat performance this year, in my opinion.

As for supporting actress, I think Helen Hunt deserves the win for her compassionate and natural portrayal of a sex surrogate therapist in The Sessions. She’ll be in for a fight, though with three actresses in Best Pic films (Sally Field in Lincoln, Anne Hathaway in Les Miserables, and Jacki Weaver in Silver Linings Playbook) and Amy Adams’s strong (and scary) turn in The Master.

Need to do some background research before you make up your mind? First, enter to to win 6-months of free Netflix streaming (you can enter every day until January 31st)! Then check out which of the actresses’ past films are available on Netflix to watch right this minute. No time like the present for getting your movie on.

Children of the Corn IV: The Gathering  (I was not expecting this one.)

Not Without My Daughter

Smokey and the Bandit II

Then She Found Me

Girls Just Want to Have Fun

Don’t forget to check out the Netflix queues based on the Best Picture and Best Director nominees!