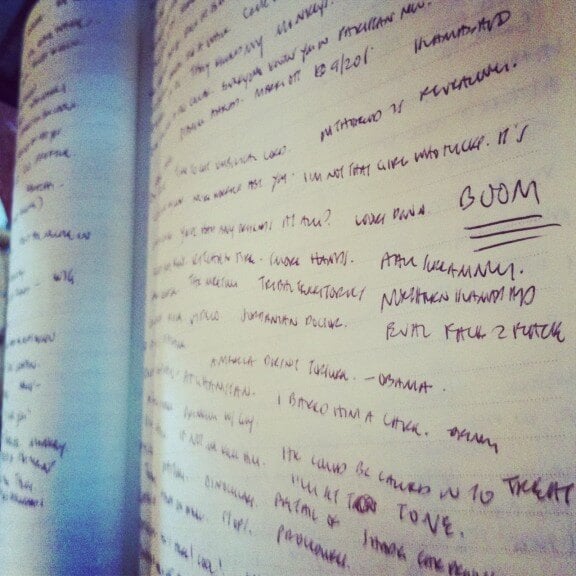 …my notes from Zero Dark Thirty…

Have you made your movie-going plan to see all nine best picture nominees? I’ve already seen (and written about) Beasts of the Southern Wild, Django Unchained, Life of Pi, Lincoln and Zero Dark Thirty. I’ve seen but haven’t yet written about Silver Linings Playbook. (That one just didn’t sit right with me, and I’m still trying to figure out why.) I saw Argo yesterday (review to come ASAP), planning to see Les Miserables soon…and waiting patiently for some kind Kansas City theatre to play Amour.

Right now, my personal vote for Best Picture would go to Zero Dark Thirty, being that my definition of “best” currently includes intriguing storytelling (and a story in need of telling), cohesive sense of tone and purpose, compelling visuals, acting that makes me forget they’re Acting, and a film that is trying to have a human conversation with its audience (as opposed to one that is made to impress, frustrate or pander).

Of course, the Oscars don’t have the monopoly on Best Picture lists. The seriously obsessed site AwardsBreach.com has a helpful current chart of awards nominees and winners.  If you’re looking for movies to add to your Possible Bests of 2012 list, check out nominees from other awards that didn’t make the Oscar cut: The Best Exotic Marigold Hotel, The Dark Knight Rises, The Master, Moonrise Kingdom, The Perks of Being a Wallflower, and Skyfall have all shown up on other best-of awards lists. You should also peruse the leading American film festival winners as well: The Sessions (titled The Surrogate at the time and one my personal picks for best of the year) won Sundance’s Audience Award (Beasts of the Southern Wild won the Grand Jury Prize). Of course, we all have our own list of favorites. Mine isn’t  completely drawn up yet, but a couple non-Oscar-awarded movies that moved me this year were Safety Not Guaranteed and Looper. Does a time-travel theme keep juries from considering films serious enough for major awards? Hmmmmm…

While you’re juggling theatre times and locations for Best Pic current releases, take some breaks for at-home study. Let’s go deep with Netflix Streaming because I’m currently giving away two 6-month subscriptions. You can enter every day until January 31, so, um, do. Oh, and join the Oscar nomination discussion on Facebook. Who would you trade in and trade out?

Amour is being touted as the German/Austrian filmmaker’s most accessible movie of his career. It’s gotten high marks from critics, but part of me wonders if the nomination is to reward the man for a lifetime of provocative work, as well as for one stellar film. I’ll report back after seeing it. Of his earlier work, you can see The Piano Teacher (unrated, critically acclaimed, widely described as “disturbing”) and Code Unknown (starring frequent Haneke collaborator Juliette Binoche) on Netflix Streaming right now.

Argo
Directed by Ben Affleck, Written by Chris Terrio based on an article by Joshuah Bearman

Neither of Affleck’s previous excellent directorial outings (Gone Baby Gone and The Town) are available for streaming, but they are both worthy of bumping to the top of your DVD queue. Check out his most recent acting work in John Well’s The Company Men, instead. It’s a well-done recession drama that will remind you of Affleck’s leading-man roots.

This is truly a newcomer’s movie, being the first feature for the director and the stars. I had to search through the crew list for someone with credits and was pleased to find out that co-editor Affonso Gonçalves (who worked on Beasts with Crockett Doob—please let that be his real name) also edited one of my favorite films from 2010: Winter’s Bone, which you can and should stream right now.

This is an easy to-watch recommendation that I need to follow myself: Watch Tarantino’s first film, Reservoir Dogs ASAP.

Les Miserables
Directed by Tom Hooper, screenplay written by William Nicholson, based on a whole lot of other work all the way back to Victor Hugo

Settle in to watch The King’s Speech, which Hooper won an Oscar for directing in 2011. And check out another Nicholson-penned screenplay based on an old, old story: 1995’s First Knight.

Life of Pi
Directed by Ang Lee, screenplay by David Magee (based on the book by Yann Martel)

Ang Lee won a directing Oscar for Brokeback Mountain, stream-able now, in 2006. I keep on putting off seeing this film because I know it’s going to make me very sad (heartbreaking content and our loss of Ledger), but the time has probably come.

Most of Spielberg’s big catalogue of work is on DVD only at Netflix, but you can see him flex his animation directing muscles in 2011’s The Adventures of Tin Tin right now.

Silver Lining’s Playbook
Directed by David O. Russell, screenplay by Russell, based on a book by Matthew Quick

Another easy must-stream: The Fighter, for which Russell got a Directing nomination in 2011.

I covered Bigelow streaming earlier this week, but let me remind you that the Ford/Neeson submarine thriller K-19: The Widowmaker is on Netflix now. You should also check out the Coen Brother’s remake, True Grit (nominated for 10 Oscars in 2011) because it was also produced by prolific making-movies-happen-er Megan Ellison. Besides Zero Dark Thirty, her 2012 slate also featured The Master, Lawless, Killing Them Softly and Spring Breakers. Busy woman.

What 2012 film gets your Best Picture vote?