Every so often, I want to highlight the entertaining and insightful goings-on in the comments section of Gimme Some Film. Let’s start with a reader who graciously reviewed The Twilight Saga: Breaking Dawn – Part 2 when she realized this was the closest I was going to get to Jacob, Edward and Bella. (Not close.)

Ladies and gentlemen, I give you Melody Harris on the last Twilight film (SPOILER ALERT): 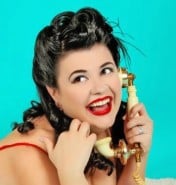 “It was a satisfying ending to a mediocre (at best) film series. The books were inexplicably compelling, and the films were not even a little bit. KStew’s acting is terrible, and in this movie her ‘daughter’ did an even better job than her, which is saying a lot. Watching her get mad at Jacob over his imprinting on Renesmee (what kind of a goofy name IS that?!), was like watching a toddler get faux angry at having their sometimes beloved, sometimes tossed aside toy taken away from them.

“I did appreciate the *almost* fight sequence—a satisfying, blood-and-guts style CGI fight-fest between vampires with the coolest, creepiest makeup I’ve seen yet for a sexy-vampire film, and big scary-looking wolves. Ooh, and the earth splitting open was kinda neat.

“If you found yourself pulled into the books, without reason why (I AM a better-than-Twilight–book-reader, I promise!), then see the last movie and be done with the movie adaptations. And maybe after, re-read the books to remember why you liked the series in the first place. And if you did not get pulled into the books, fortheloveofeverythingthat’sholy, do not under any circumstances subject yourself to the movies!*

*unless of course you like looking at ditzy man-candy. Then… by all means.

And then there were some thoughtful responses to my complaint about the Skyfall scotch line. For those of you who haven’t contributed to the film’s $90+ million gross (really, it’s worth the ticket price for the first action scene alone), here’s the deal: There’s a toss-off line in a crucial part of the film that compares a woman’s life and a good Scotch…and the Scotch comes out ahead. I protested repeatedly; some of you responded. SPOILERS AHEAD.

Brian says, “Bond’s experience on the island was all about Silva trying to get under his skin and unnerve him — to do anything, including flirting with the macho, womanizing Bond, to rattle him. At each attempt, Bond has to parry and make it seem like no big thing. (Hence his response to Silva’s come-on: ‘What makes you think it would be my first time?’) I feel like the line about a waste of scotch was a similar parry.” Read more (and you should—it’s a strong argument).

Nathan says, “Call me a male pig, but I loved the part that bothered you most, Sarah. It was classic Bond for me and played well in this film, which was loaded with meta references to the Bond cannon.” We will not call you a male pig, but we will say people should read the rest of your comment, (SPOILERS!), which has good things to say about Bond’s character development.