Scorsese’s The Wolf of Wall Street is Deeply Disconcerting 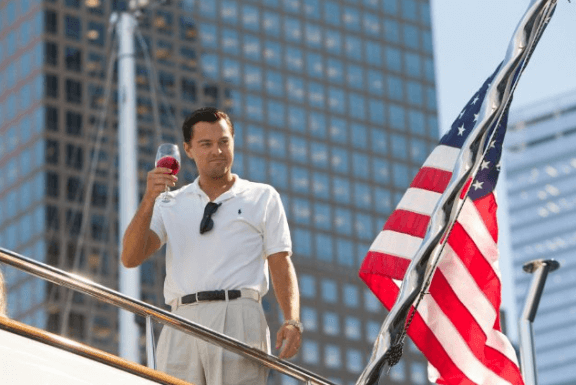 I walked out of The Wolf of Wall Street with a bad case of brain whiplash. Based on an autobiography by penny stockbroker Jordan Belfort, Wolf is expertly directed by Martin Scorsese (you know: Taxi Driver, Raging Bull, The Last Temptation of Christ, Goodfellas, The Departed, etc., etc.). As I tried to find a way to describe my post-film feelings, the best I settled on is this: Deeply disconcerted. Here’s why:

The amount of talent behind this film is astounding. I’m a Scorsese fan, and he didn’t disappoint. Every frame is interesting (even if there were a little too many of ’em at 2 hours and 59 minutes). His use of sound and music is sharp as always. His style is assured and unrelenting; you may disagree with some of his choices, but you never doubt that he made them with thought and considerable force.

And then there’s frequent Scorsese collaborator Leonardo DiCaprio, playing the title character with characteristic commitment. In the past decade, we’ve mostly seen DiCaprio playing tightly controlled characters. With Belfort, we get to see DiCaprio go over the top, over the edge, and way overboard (even literally) alongside his unstable sidekick Donnie (Jonah Hill). His surprising physical comedy skills are reason alone to see this film. It’s downright fun to see a Serious Actor transform into a deranged bulldog of a man, an unhinged earthworm of a bro.

And that’s where the disconcertion comes in: The fun. The film’s humor is so dark it’s black-hole-ish. You get sucked into the manic pace, the cacophony of corruption, and you laugh at these ridiculous boys and their pathetic belief that they can solve their problems by becoming rich…and doing lots and lots of drugs. It’s funny until it’s not. The film’s climax, the moment when “the chickens come home to roost,” as Jordy’s lenient dad (Rob Reiner) too-gently warns him will happen, is not Belfort’s arrest for fraud. It’s the long, tense sequence when his second wife Naomi (Margot Robbie) tells him she wants a divorce and is taking the kids. All the humor drops out as Belfort finally implodes—as he tells his mentor (Matthew McConaughey) at the beginning of the film he never wants to do—almost killing his young daughter in the process. But don’t worry. The dude bounces back. Too fast. Too soon.

The film’s point of view is completely cynical. Scorsese seems to be saying that equating the American Dream with the Almighty Dollar is dooming us to a society filled with despots and dupes. You’re either scamming or being scammed. And justice? It’s easily bought. The film’s moral center—Kyle Chandler (Coach Taylor!) as FBI agent Patrick Denham—has so little screen time and so little power to stop the cycle of greed that the film spins away on a wobbly axis of anti-moral debauchery.

Scorsese is probably trying to ridicule these men and their mottos (“They all want something for nothing.” “I know how to spend [their money] better.” “There’s no nobility in poverty.” “It’s lucky we’re in First Class!” “Everything is for sale.”), but he’s having so much fun doing it that the satire loses its punch. Scorsese lenses through Belfort’s eyes almost exclusively, and it’s ugly, obscene, and exhausting. Women are possessions to be bought and used, children are accessories for the ego, friends are only worth what they can give you, and customers are “mother-f—–g idiots.” (Side question worth discussing at your next dinner party: Just because Belfort sees women as objects, does the camera have to, too?) I wish Scorsese could’ve given us an opposing view to sharpen his cynical point. Without the friction of a strong counter-argument character, we’re left to wonder if the film is mocking or glorifying Belfort and his greed.

Does The Wolf of Wall Street mock or glorify? What did you think?