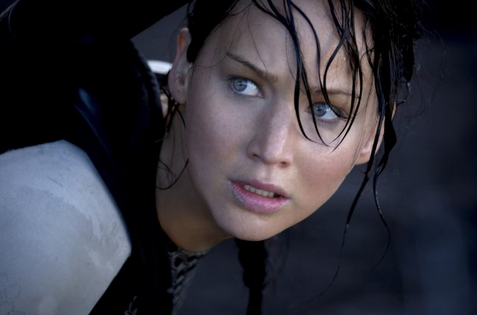 The second installment of The Hunger Games franchise is on a lot of people’s Thanksgiving schedule. My sister and I have already planned our Hunger Games night for next weekend, and I’ve talked to quite a few friends who have made it part of their holiday plans as well. I’m glad to report that it’s a solid choice for a post-turkey outing for the 13-and-overs—heck, wild poultry even shows up in the first few minutes of the film. Catching Fire follows Katniss Everdeen as she tries to live a “normal” life post-games back on District 12. Fallout from her faked-or-was-it-faked romance with Peeta, her Panem-wide celebrity, and the machinations of President Snow all hem her in and threaten her (admittedly depressing) status-quo.

Helmed by Francis Lawrence (Water for Elephants, I Am Legend), the film is a solid adaptation of Suzanne Collins’s popular novel. It suffers a bit from middle-child syndrome; there’s a lot of plot to explain and much to set up for the two-part Mockingjay finale(s) coming in 2014 and 2015. But Francis Lawrence and screenwriters Simon Beaufoy and Michael Arndt do a good job of synthesizing information without getting in the way of the emotion of the story. That said, there are a few too many expositional sequences, and too many of those are sitting-and-talking scenes, one of my directing pet peeves. (Let these talented actors do something! Convey some visual information along with the dialogue!)

Some easily nauseated viewers will be happy to know that quick-cut, hand-held style of Gary Ross’s initial The Hunger Games is gone. Lawrence uses many more wide shots, more lingering looks at The Capitol, and a more standard, coverage style for conversation scenes. I missed the urgency and claustrophobia Ross brought to Katniss’s story. But Francis Lawrence makes up for it by going for the heart and using well-placed extreme close-ups to let us into these well-loved characters’ emotions.

Of course, one of the reasons why this close-up motif works so well is because star Jennifer Lawrence (as hero Katniss Everdeen) is a force. She’s utterly convincing as a young woman who must make world-altering decisions way too early. She does tough just as well as she does scared, and in the last shot, she shows us she can do angry better than anyone. Riveting and complex, she’s a joy to watch. Consider your Thanksgiving movie plans safe in Jennifer Lawrence’s capable hands.