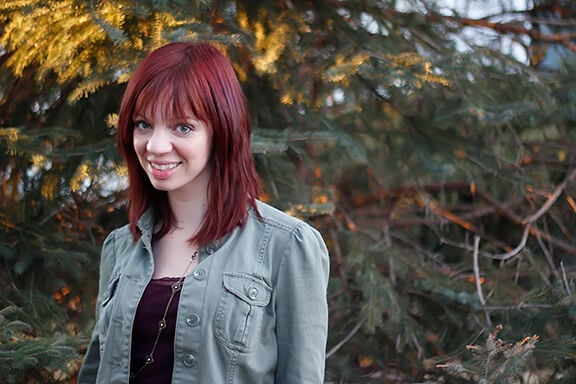 Today I’m happy to introduce you to one of the first friends that I was introduced to when I moved to KC nine years ago — Janelle!

Janelle and I met when we were both working down the hall from one another in the basement of a local megachurch.  There were a zillion people on staff, but I remember singling Janelle those first few weeks as someone I really wanted to meet because she (a) liked changing her hair color as often as I did (b) was the only person I knew who had decorated her office with all sorts of stylish natural lights to ward off the Big Bad Florescent Lighting (c) had a reputation as being generally awesome and hilarious.  Sure enough, all of those proved true, and we became fast friends.

Whether it was pulling up a chair in each other’s offices for one of a thousand conversations about work and life, or driving an unsteady U-Haul for 26 hours together to and from New Orleans to do flood relief, or stalking The Civil Wars concerts (and then freaking out together when they broke up, and moving on to stalking The Lone Bellow concerts), facing off at Settlers of Catan — we’ve walked through a lot of life together, and I’ve been grateful to have her as a friend through many different seasons.  I even had the honor of bridesmaiding for her wedding, after watching her fall in love with a boy from Florida who she met on a message board (remember those?) for fans of Over The Rhine.  (Which I must point out that they had their wedding in a historic local theater and Over The Rhine came there to sing for the wedding — crazy cool!)  And then a few years ago, our entire community was beyond excited when Janelle and her husband fostered and then adopted a really cool 9-yr-old boy, which she shares about candidly in a parenting column for the Kansas City Moms Blog.

As you can imagine, a lot of life has happened in 9 years.  Janelle ended up earning her HR certification and now helps manage hundreds of staff for the church, and I transitioned from music ministry into being a full-time blogger.  So sadly, our days of passing by in the hallways have moved into memory-territory.  But my respect for Janelle and the way she lives her life with such authenticity, creativity, bravery, faith, perseverance and laughter — so much laughter — is as strong as always.  So grateful to have had this girl as a friend this past decade, and hopefully for many to come.

Here are 10 things Janelle has learned!

I can be super indecisive when it comes to things like trying to figure out where to eat with someone. So as to prevent the continual back-and-forth of “I don’t know. Where do you want to go?”, I’ve learned to simply throw out the three options rule. Either I give the person three options from which to choose or vice versa. This rule will not only save you time, but who knows – it might just save your marriage. :)

I get that flying down the road makes you feel all fast and furious, but before you start bragging about the hours that your lead foot has saved you, let me tell you what I’ve learned about the math of speeding. Take a look, Speed Racer: If you’re driving 30 miles and you’re going 70 mph, it will take you 25 minutes and 43 seconds to get to your location. But if that is just waaaay too long for you, you can crank it up to 80 mph, putting yourself and every other car around you in more danger, and this will get you there in 22 minutes and 30 seconds. You’ve basically saved 3 minutes. That’s it. So put the pedal to the metal if you’d like, but I’ve learned that the danger and the cost of tickets and increased insurance rates really doesn’t make it worth it to me.

How to ask if a woman is pregnant without offending her

I stood there in horror as the woman next to me replied to the stranger’s question with, “No, I’m not pregnant. I just carry my weight in the wrong place.” The catastrophic crash of this conversation was heard from miles around. It could have been prevented if the curious stranger had simply asked, “Where did you get your pants?” Unless the woman’s response includes words like “maternity,” “bump,” or “elastic band,” there’s a good chance that she isn’t expecting. Note: Question also comes in handy when you want to know where an individual got his/her pants.

Practice makes perfect, at least that’s what we’re told. But a former banjo teacher corrected me of this notion, and it has been a life-changing lesson. He told me that practice doesn’t make perfect – it makes permanent. If we continue to do the wrong thing over and over again, it won’t suddenly become right. It’ll just be engrained, making that road to perfection that much more difficult. So be careful how and what you practice, as you are paving the way of future behavior.

I really wanted to be the type of person that went out of my way to do something kind for others on a regular basis… but that’s about as far as I got. My wanting was really more of a wasting; wasting time and wasting opportunities to show love in practical ways. I found that if I was going to have any chance of bringing these moments to fruition, I would have to put them on my calendar. So once a week (yes, that’s it) I have a reminder to stop and do something kind for someone. It could be as simple as taking the time to write an encouraging email to a friend or paying for the lunch for the stranger behind me in the drive-thru. Scheduling kindness doesn’t make it less sincere, it just makes it more apt to happen.

If you don’t want to forget your leftovers, put your keys in the refrigerator

Most people don’t want to hear all about your vacation

You’ve just returned from hiking through Alaska or visiting the treasures of the Vatican, and all you want to do is tell anyone and everyone about every single moment of the incredible experience! The only problem? No one wants to listen. Well… most people don’t anyway. While it may be disappointing, the truth is that most people only want to hear just a few sentences (at most) about your journey. You may think they’re being rude, but really… take off your hiking boots for one second and put yourself in their shoes. Rather than telling everyone you know, save your stories and pictures for one or two close people. Even then, it’s best to try to narrow it down to just the highlights.

The superior way to make a s’more

I call it the S’moreperior: graham crackers, marshmallow, chocolate hazelnut spread, and fresh raspberries. You’ll either hate me or love me for this one later. So… I’m sorry. You’re welcome.

Don’t stereotype, even when it’s nice

Many people are aware of the destruction caused by negative stereotypes. The automatic response is to paint groups of people in a more positive light. And while this seems like a kind gesture, not every person in a third-world country is joyful despite their circumstances. Not every person in their 80’s is wise. And if you think every precious three year-old is full of innocence… well, you didn’t have to parent me when I was that age. We stereotype because it’s convenient and it helps to organize our thoughts. But I’ve learned that the easiness of sorting people into various categories robs them of their individuality and creates a barrier for me to really get to know them as a person. It’s a lot more work, and I don’t always get it right, but I try to do my best to keep the stereotypes to a minimum.

“There’s nothing you can tell me that will make me love you less.”

Up until I was in college I had an extremely difficult time opening up to people. I had built thick layers of defense mechanisms that kept people from seeing my flaws and failures. One night as I was struggling behind the walls with an emotionally painful situation, my best friend said to me, “There’s nothing you can tell me that will make me love you less.” She may have always felt that way, but verbalizing it pierced through years of barriers and allowed my true self to spring forth. I’ve learned that we not only need to hear but say those words to a few close people with whom we can trust with our heart. These words have since given me the freedom to truly know and be known by those closest to me, including my Savior. So I’m forever grateful for this simple statement that has been the spring that watered the seeds of grace and redemption in my life.