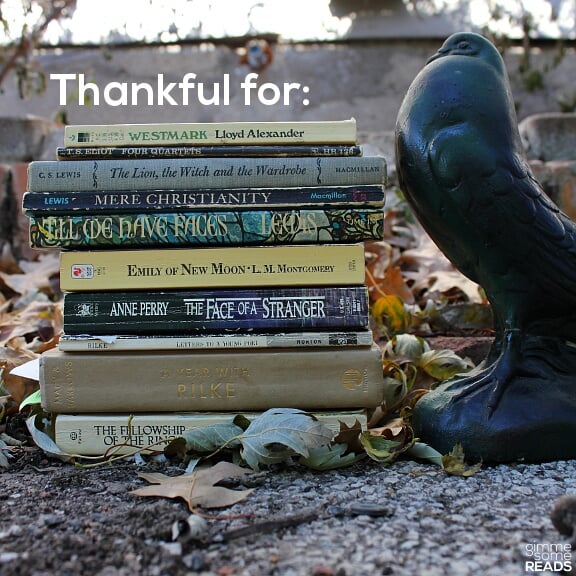 Thanksgiving Day is almost upon us. A few days ago, Penguin Books launched #thankthebook, asking readers to tweet about the book that made them love reading. I don’t have a clear memory of the first book I loved, but immediately I thought of C.S. Lewis’s Chronicles of Narnia series — and tweeted that they introduced me to the multifaceted magic of life, stretching my imagination and my heart.

Inspired by this Thank-the-Book idea, I selected ten books that I am thankful for — not because they made me love reading, but more for how they have affected me. Though all ten are definitely among my favourite books, it was interesting to realise as I was pulling books from my shelves that I don’t necessarily feel gratefulness for a book simply because I love it. 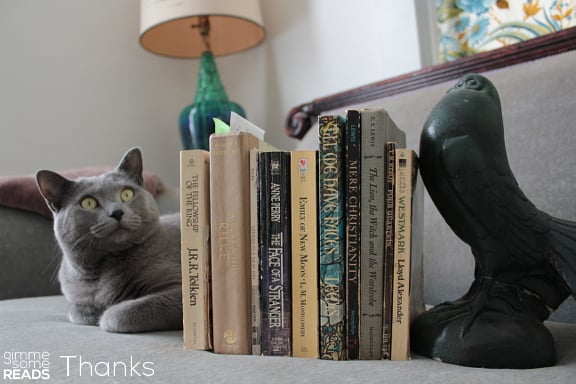 I read these books over and over as a kid; and at ten years old, I even named my first cat Theo, after the main character, because I loved him and these stories so much. About Theo, Alexander wrote possibly my favourite character introduction ever, just midway through the second page of Westmark:

As for Theo, he loved virtue, despised injustice, and was always slightly hungry. Apart from that, he was reasonably happy.

I think these books showed me how much grey there is in life, that things aren’t as straightforward as you’d like; but, even so, it’s important to hold on to your values and friends.

I’d read bits and pieces of this over the years, but I don’t think I read it in full until about three years ago. I have never quite recovered (for which I am grateful). There is truly something for every moment found in this poem — as you can see from the fact that I’ve written about it in at least three other posts: Those Who Wander, Farewell 2012, and Three Thoughtful Quick Reads.

One of the lines that I’ve often sat with is from East Coker III:

I said to my soul, be still, and let the dark come upon you
Which shall be the darkness of God.

There’s such a raw honesty to this poem; as I read the lines, I feel the words carving out a space for grace in me — both to receive it and to give it.

3. The Lion, the Witch, and the Wardrobe (and the rest of the Chronicles of Narnia) by C.S. Lewis

Oh, to return to the first time I read this story. Can you imagine experiencing again that wonderment with Lucy when she finds herself stepping out the back of the wardrobe:

A moment later she found that she was standing in the middle of a wood at night-time with snow under her feet and snowflakes falling through the air.

There is so much to love about these stories: their wonderment, their deep honesty, their adventure. But, it is Lewis’s depiction of God as Aslan that I will be forever grateful for. As you can see by the next two books, C.S. Lewis has probably affected me more than any other author.

The first thing I ever underlined in this book was in the Preface:

God keeps no one waiting unless He sees that it is good for him to wait.

And, I marked in the margin two additional dates when it struck me again.

I’ve read this book multiple times and often find myself reconnecting with something I obviously liked before — seeing it again as if for the first time. I’m not much of a nonfiction reader, but I love Lewis’s nonfiction as much as his fiction. Whatever you think or believe, I would recommend this book — for its brilliant thought process and apt life descriptions if nothing else.

This is his retelling of the Psyche myth. I think I first read this in college and it messed with my head a bit. The tone is much darker than his other works and doesn’t have as clear a sign of hope, either. But it is one of the best books I’ve read. And there’s a scene in the middle that is the best depiction I’ve read describing how our experience of life is limited to how we see it — that we can miss out on what life has to offer when we choose doubt over faith.

Apparently, I didn’t do much underlining in this book, but here’s one line I marked:

No one who hear’s a god’s voice takes it for a mortal’s.

I read the Anne of Green Gables series before I read the Emily series, but though I dearly love Anne, I feel the strongest bond to Emily — probably because her drive to be a writer is more of a central theme in her story. In a conversation with her favourite teacher, after he’s looked over some of her writing, he tells Emily:

If it’s in you to climb you must — there are those who must lift their eyes to the hills — they can’t breathe properly in the valleys. God help them if there’s some weakness in them that prevents their climbing.

Anyone else reminded of Rilke’s Letters to a Young Poet?

Emily also talks about a recurring moment that she has, which she calls “the flash,” that I’ve experienced myself.

It had always seemed to Emily, ever since she could remember, that she was very, very near to a world of wonderful beauty. Between it and herself hung only a thin curtain; she could never draw the curtain aside — but sometimes, just for a moment, a wind fluttered it and then it was as if she caught a glimpse…And always when the flash came to her Emily felt that life was a wonderful, mysterious thing of persistent beauty.

7. The Face of a Stranger by Anne Perry

I still remember the moment I first laid eyes on this book. I was in high school, and I was browsing the mystery section in the library one evening, when I saw The Face of a Stranger on a book spine. My attention was captured, and the first line of the little snippet on the back sealed my interest: His name, they tell him, is William Monk, and he is a London police detective.

The first in a series of Victorian mystery novels following William Monk, this story begins with Monk waking up alone in a hospital — no memory, no friends; the only things he does have are his detecting skills and a lot of people who don’t like him — including himself.

Again, there is something very honest about this story and the character of Monk. Anne Perry not only outright asks the question — how do you face the unknown darkness, the monstrosity inside your own brain, your own soul? — she also walks her character through it with distinction.

And, in addition to creating complex characters and good story lines that deal with issues of importance, her books also have great lines slipped in among the action:

If you haven’t read any Anne Perry, I’d recommend plunging in with this one.

Whew. This book. There aren’t words to adequately describe what it is to me. Different quotes stand out to me at different times, but its truths are never far from my mind. One such quote is this one, from the third letter:

Being an artist means, not reckoning and counting, but ripening like the tree which does not force its sap and stands confident in the storms of spring without the fear that after them may come no summer. It does come. But it comes only to the patient, who are there as though eternity lay before them, so unconcernedly still and wide. I learn it daily, learn it with pain to which I am grateful: patience is everything!

Whether you consider yourself an artist or not, if you haven’t read this yet — do.

9. A Year with Rilke (translated and edited by Joanna Macy and Anita Barrows)

I love Macy and Barrows’ translation of Rilke; there are several poems, which I prefer their translation to others I’ve come across. When I got this several years ago, I’d only read one book of Rilke’s poems, so this became a great introduction to his larger work, as well as his beautiful correspondence. I always have this book close to hand, and when I’ve gone on extended trips, I often take pictures of the dates I’ll be gone, so I can read them on my phone.

Their entry on January 3rd introduced me to one of my favourite lines of his:

Whoever you may be: step into the evening.
Step out of the room where everything is known.

If you love Rilke, or are looking for a new daily reader — this is my favourite one.

10. Lord of the Rings trilogy by J.R.R. Tolkien

These are my all-time favourite books. I’ve now read them probably ten times. There is so much to love about this story, and I am blown away by the level of detail and the expanse of Tolkien’s imagination in creating such a rich world. Every time I read these, I feel like I learn how to be a better human, and am inspired to get back up again and journey forward no matter what obstacles are in my way.

One of my favourite quotes from Fellowship of the Ring:

“I wish it need not have happened in my time,” said Frodo. “So do I,” said Gandalf, “and so do all who live to see such times. But that is not for them to decide. All we have to decide is what to do with the time that is given us.”

I think I may be due for another re-read soon… 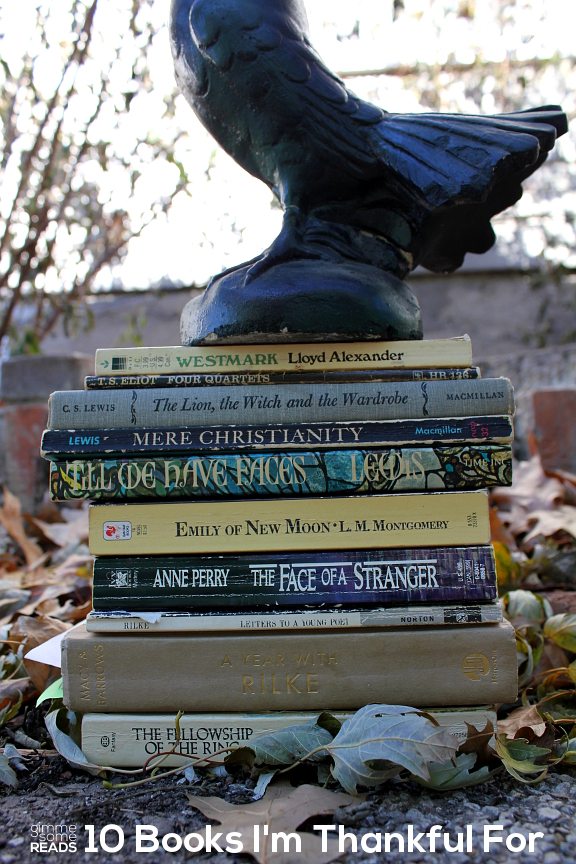 What books are you thankful for?