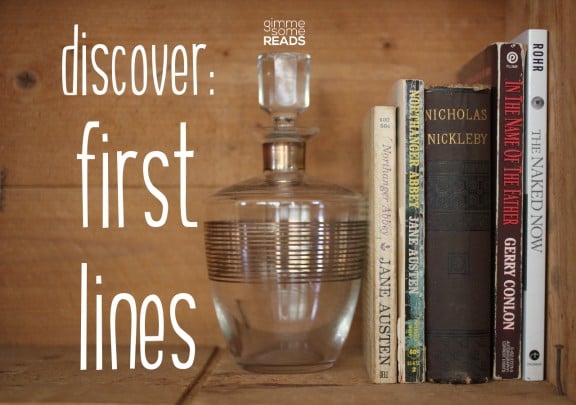 Whew. I feel like I just wrote one of those word problems that makes you calculate the speed of two trains approaching each other. Okay — no more numbers. Just books.

Ha! I just realised one of the four books I selected (and already photographed!) doesn’t really start with an N. I guess I read it as The Name, rather than In the Name, or I simply equated the word “in” to  the letter N. Whoops. Well, its first line fits in surprisingly well among this batch, so I’m gonna go with it (and hopefully pay better attention to my alphabet in the future…).

So, last week G.K. Chesterton’s Orthodoxy had the best first line, whose will it be in this week’s batch of four N-entitled books (or rather three N’s, and one “in”)?

No one who had ever seen Catherine Morland in her infancy, would have supposed her born to be an heroine. 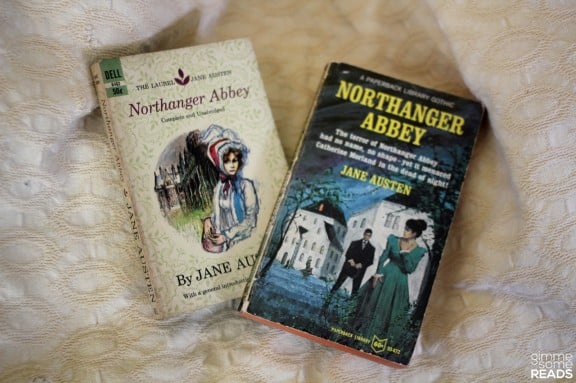 Aren’t these two paperbacks great? I couldn’t choose just one to photograph. I think I actually laughed out loud when I saw the one on the right in Half Price Books. If you can’t make out the tagline, it says, “The terror of Northanger Abbey had no name, no shape — yet it menaced Catherine Morland in the dead of night!” Plus, on the teaser page inside it states (in all caps, mind you): “A holiday ends as terror begins — stalking Catherine Morland from every shadowy corner of Northanger Abbey!” Awesome.

My uncle gave me this book when I graduated from high school (a newer version than shown above; yes, I now own three copies of this book). It was the only Jane Austen book I had yet to read. And let me tell you, when I first started reading it I was very confused. Which is comical to me now, because the sarcasm is so obvious I don’t know how I missed it then. But I did, at least for the first few pages.

I guess I believed her first line — who is this boring protagonist and how can I survive an entire book following her around? Until I realised that Austen was writing a ‘mocumentary’ of the gothic romances popular in her time. If I’d ever doubted her brilliance, I knew then that she was one of the cleverest, best-humoured writers ever to live forty-odd years on this earth. I mean, this is the 1800s, and she’s writing a parody that still somehow rings humanly true amid all its sarcasm. The woman can’t help but describe people and relationships and society to a T.

Northanger Abbey was the third novel Austen wrote, and the first she sold to be published (1803). So this story falls in line (writing-wise — 1798ish) right after Sense & Sensibility (written 1796ish; published 1811) and Pride & Prejudice (written 1797ish; published 1813). But it didn’t get published until after her death in 1817, as two volumes in a four-volume set, which also included Persuasion (written 1816ish).

Definitely worth a read. And there are at least two films available to watch, as well. Though I am a Peter Firth fan (MI-5‘s Harry Pierce!), I prefer Masterpiece Theatre’s 2007 version over BBC’s 1987 one. Don’t worry, you get J.J. Feild in the new one.

2. Nicholas Nickleby by Charles Dickens (originally published as a serial from 1838 to 1839)

There once lived in a sequestered part of the county of Devonshire, one Mr. Godfrey Nickleby, a worthy gentleman who, taking it into his head rather late in life that he must get married, and not being young enough or rich enough to aspire to the hand of a lady of fortune, had wedded an old flame out of mere attachment, who in her turn had taken him for the same reason; thus two people who cannot afford to play cards for money, sometimes sit down to a quiet game for love. 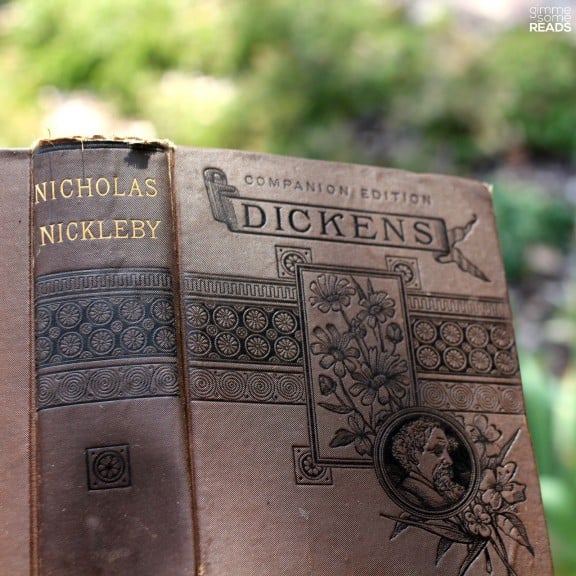 I was late to the Dickens fan club. And I’ve actually still only read two of his novels — first, A Tale of Two Cities, and then, Nicholas Nickleby. But it was his Tale of Two Cities, which I read either right after high school or right after college, that opened me up to the rich world of classic literature. Before that, I thought all those classics were too archaic. (Who was I??)

Dickens is a king of first lines. Do you remember how he begins A Tale of Two Cities?

Oh my goodness. And though that first line certainly trumps the beginning of Nicholas Nickleby, I liked the story of the latter better. There was something so refreshing and hopeful about the young protagonist, something so normal and real, that I felt a strong connection to him throughout his long journey.

It definitely takes a while to read (it’s 800 pages), but the plot moves along fairly quickly and the characters are endearing, entertaining, and devilish enough that you want to keep reading. And like Austen, Dickens is another writer who so astutely observes the society of his age that though his plots and characters often seem over-the-top, he too describes humanity with clever precision.

And again, there are films. Two I’ve seen were made a year apart, both good, but perhaps because I saw it first, I preferred the 2002 version. (The main actor can be a bit frustrating at times, especially at first, but you get used to him after a while.) Check out the trailer for that version, below.

3. In the Name of the Father by Gerry Conlon (originally published in 1990)

There we are, sitting mesmerized in the dock, each of us holding a carnation.
– Preface

My mother says I was born such a delicate child, with such thin blood, that the doctor prescribed me a bottle of Guinness a day.
– Chapter 1 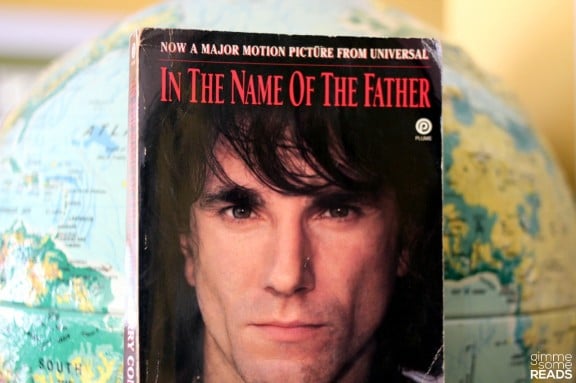 This is the true story of Gerry Conlon’s false conviction, as one of the Guildford Four, in regards to an IRA bombing; and his subsequent journey to freedom. Definitely worth a read (and a watch — you can’t turn down Daniel Day-Lewis, Pete Postlethwaite, and Emma Thompson).

The first line of chapter one is certainly a unique start to a story and introduction of a character. Interestingly enough, there is a similar vein of humour evident here as in the beginnings of both Northanger Abbey and Nicholas Nickleby.

I can’t remember whether I read the book or saw the move first. I can visualize more scenes from the movie than I can recall words from the book. But I do remember the book being an enjoyable, easy read (that’s not to say the subject matter isn’t sad and frustrating, just that the tone is clever and buoyant).

4. The Naked Now by Richard Rohr

I am a man born between ages, moving between cultures, seeing between religions, but also happily a Christian.
– Preface

The future is by definition the unsayable and the uncontrollable, filled with paradoxes, mysteries, and confusions.
– Chapter 1 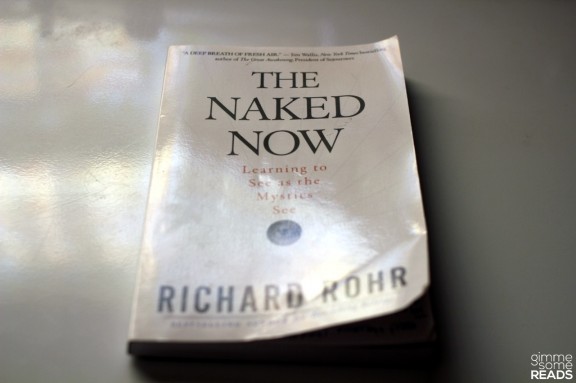 The first line of the first chapter is more intriguing than that of the Preface, but neither inspires me to jump right in and keep reading immediately. But that’s probably more due to the fact that I’m not a particular fan of nonfiction. I do appreciate Rohr’s writing, and especially liked his book, Everything Belongs, which I read prior to this one.

As far as The Naked Now goes, though, I don’t remember much about it; which doesn’t mean it isn’t good, it just didn’t leave a lasting impression on me. Perhaps it’s because at the time I read it, it was just a further example of a conversation my coworkers and I were already having, so rather than being revolutionary, it was more an underlining of what we had been discovering.

But here’s one of the first things I marked; it’s on the next page with my notation, “not how I usually hear this”:

True spirituality is not a search for perfection or control or the door to the next world; it is a search for divine union now. The great discovery is always that what we are searching for has already been given! I did not find it; it found me.

Having read all four of these (a first in the {Discover: First Lines} series!), I wonder how that affected my favourite first line choice. Among this batch, each of the  first lines is both well-written and intriguing.

However, probably because I’m biased towards classic fiction, I zeroed in on the well-chosen and humorous words of Dickens and Austen. And though I prefer the story of Nicholas Nickleby, I finally settled on Northanger Abbey as having the better beginning. 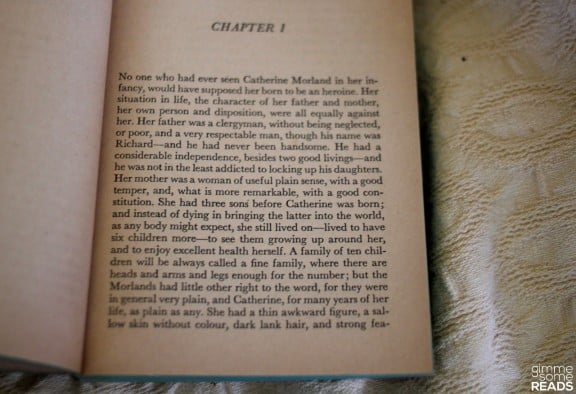 No one who had ever seen Catherine Morland in her infancy, would have supposed her born to be an heroine. Her situation in life, the character of her father and mother, her own person and disposition, were all equally against her. Her father was a clergyman, without being neglected or poor, and a very respectable man, though his name was Richard, and he had never been handsome. He had a considerable independence, besides two good livings, and he was not in the least addicted to locking up his daughters. Her mother was a woman of plain sense, with a good temper, and, what is more remarkable, with a good constitution. She had three sons before Catherine was born; and, instead of dying in bringing the latter into the world, as anybody might expect, she still lived on — lived to have six children more — to see them growing up around her, and to enjoy excellent health herself. A family of ten children will be always called a fine family, where there are heads, and arms, and legs enough for the number; the Morlands had little other right to the word, for they were in general very plain, and Catherine, for many years of her life, as plain as any. She had a thin awkward figure, a sallow skin without colour, dark lank hair, and strong features; so much for her person, and not less unpropitious for heroism seemed her mind. She was fond of all boys’ plays, and greatly preferred cricket, not merely to dolls, but to the more heroic enjoyments of infancy, nursing a dormouse, feeding a canary-bird, or watering a rosebush. Indeed she had no taste for a garden, and if she gathered flowers at all, it was chiefly for the pleasure of mischief, at least so it was conjectured from her always preferring those which she was forbidden to take. Such were her propensities; her abilities were quite as extraordinary. She never could learn or understand anything before she was taught, and sometimes not even then, for she was often inattentive, and occasionally stupid.

Wow. What a beginning. I first smiled at “though his name was Richard,” and first laughed at “he was not in the least addicted to locking up his daughters”; but I think my favourite bit of this page was her “A family of ten children will be always called a fine family, where there are heads, and arms, and legs enough for the number” line. Austen must’ve thoroughly enjoyed writing this story.

What was your favourite first line
among your own four N books?