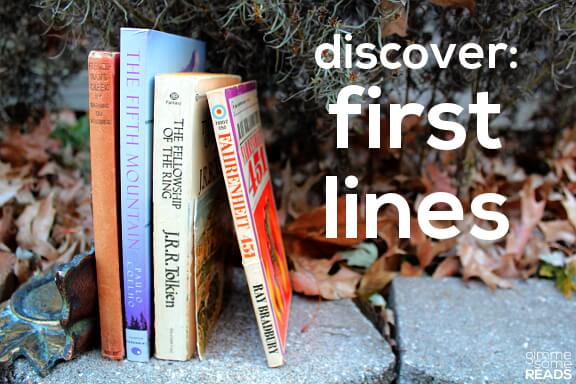 This week I pulled one of my all-time favourite books, a more recently remembered favourite, and two books I’ve had on my shelves for years but haven’t yet read. I wonder how long it would take if I made myself sit down and read all those as-yet unread books on my shelves — months? years?

Have you ever thought about how people often have books on their shelves that they haven’t read, but rarely own cds or dvds that they haven’t yet listened to or watched. Why does owning unread books seem normal, but unwatched movies seem silly?

When the east wind blows up Helford river the shining waters become troubled and disturbed, and the little waves beat angrily upon the sandy shores. 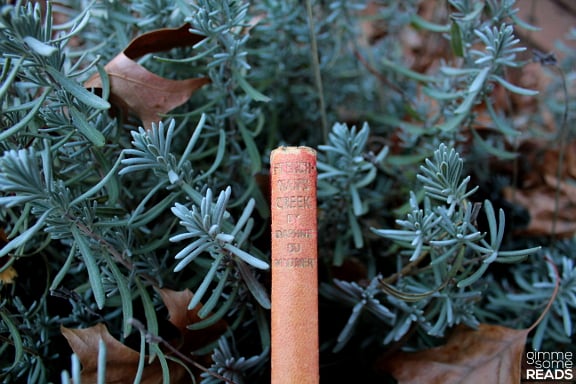 I found this copy at a used bookstore in Queenstown, New Zealand a few years ago, but for whatever reason, have yet to read it. But apparently it’s about a woman who decides to leave her dull life in London to visit her family’s unoccupied estate in Cornwall only to find a French pirate living there whom she falls in love with — and then, dresses as a boy to join his pirate crew. What? This sounds fascinating. Definitely bumping this up the list.

I have read Rebecca, My Cousin Rachel, Jamaica Inn, and The Glass-blowers by du Maurier, all of which I liked (to varying degrees). I think Rebecca is still my favourite of the lot; not sure if it’s because of the story or because it was my introduction to her writing. Her suspense style fascinates me because it’s so subtle, and her stories move at such a slow pace that the suspense creeps up on you and you’re not even sure why you’re so concerned because for the most part everything appears normal.

If you haven’t read Daphne du Maurier yet, maybe start with Rebecca, but definitely read something of hers. Alfred Hitchcock used several of her stories for his films: Jamaica Inn (his last British-made film), Rebecca (his first Hollywood-made film), and The Birds.

“I have served a Lord who now abandons me into the hand of my enemies,” said Elijah. 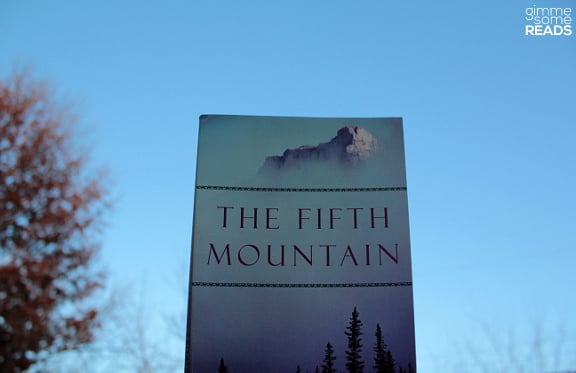 I picked Coelho’s The Alchemist up from a bookstore bargain bin many years ago and loved it. Its fable-like quality and journey toward universal truths held my attention, and I found myself underlining passages every few pages. But for some reason, that didn’t push me to read any more of his books — though it did lead me to buy this one, especially when I discovered it’s about the Hebrew prophet Elijah. Wonder how it’ll match up to The Alchemist.

3. The Fellowship of the Ring by J.R.R. Tolkien (originally published in 1954)

When Mr. Bilbo Baggins of Bag End announced that he would shortly be celebrating his eleventy-first birthday with a party of special magnificence, there was much talk and excitement in Hobbiton. 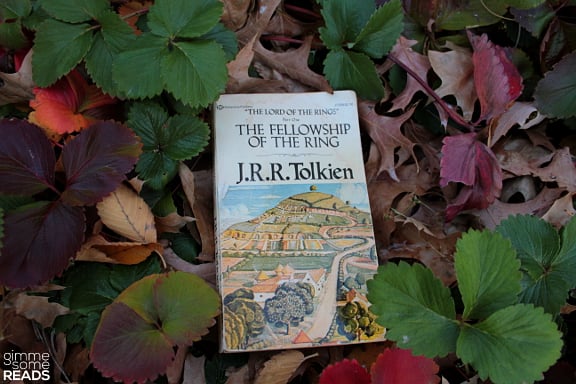 The Fellowship of the Ring by J.R.R. Tolkien | © 1978 Ballantine Books

I have multiple copies of the Lord of the Rings trilogy, but this is my favourite set because the covers are Tolkien paintings, this one being The Hills: Hobbiton-across-the-Water. It’s so lovely to get to see Tolkien’s own visuals for the world he created.

This and the other two books that make up the trilogy are my all-time favourite books. I can’t pick one of the three, because I see them as one story. If you love the movies, but haven’t read the books, you need to — seriously. Such great story-telling, characters, and quotable lines. I’ve read these books at least seven times, and find myself returning to them every few years to read yet again.

It was a pleasure to burn. 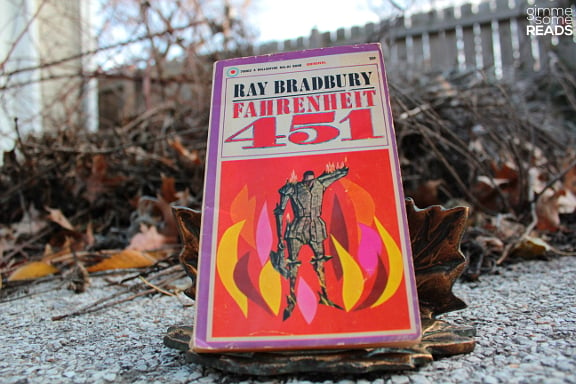 I read this in high school and remember liking it, but didn’t read it again until last year when my book club had a choose-your-own-Ray-Bradbury-book month where we could pick whichever book we wanted and then we discussed them. Not surprisingly, a majority chose this book. I immediately fell in love with it all over again and was curious that it hadn’t been on my regular rereading rotation.

Definitely an easy-to-read classic, this book is a great introduction to Bradbury and simply one of those books that everyone should read. There are some very quotable passages, as well as interesting social commentary. Plus, it’s crazy to read “futuristic” books that imagine things that are now kind of in existence.

Yep — this week was a tie between The Fellowship of the Ring and Fahrenheit 451. Both great books, with great first lines.

The Fellowship of the Ring by J.R.R. Tolkien

You can’t help but be intrigued when the first line of a book mentions a character about to celebrate his 111th birthday party. 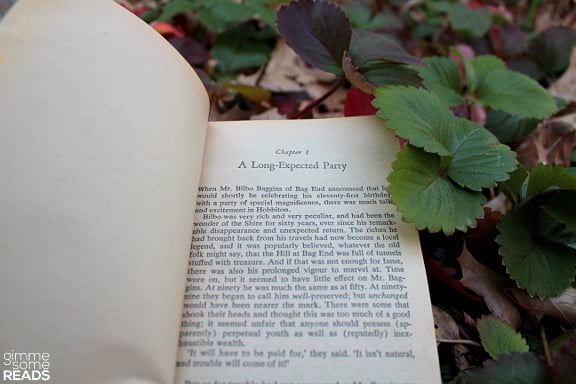 First page of The Fellowship of the Ring by J.R.R. Tolkien | © 1978 Ballantine Books

When Mr. Bilbo Baggins of Bag End announced that he would shortly be celebrating his eleventy-first birthday with a party of special magnificence, there was much talk and excitement in Hobbiton.

Bilbo was very rich and very peculiar, and had been the wonder of the Shire for sixty years, ever since his remarkable disappearance and unexpected return. The riches he had brought back from his travels had now become a local legend, and it was popularly believed, whatever the old folk might say, that the Hill at Bag End was full of tunnels stuffed with treasure. And if that was not enough for fame, there was also his prolonged vigour to marvel at. Time wore on, but it seemed to have little effect on Mr. Baggins. At ninety he was much the same as at fifty. At ninety-nine they began to call him well-preserved; but unchanged would have been nearer the mark. There were some that shook their heads and thought this was too much of a good thing; it seemed unfair that anyone should possess (apparently) perpetual youth as well as (reputedly) inexhaustible wealth.

‘It will have to be paid for,’ they said. ‘It isn’t natural, and trouble will come of it!’

Oh, Tolkien. I will be forever grateful for your imagination and way with words.

It was a pleasure to burn.

It was a special pleasure to see things eaten, to see things blackened and changed. With the brass nozzle in his fists, with this great python spitting its venomous kerosene upon the world, the blood pounded in his head, and his hands were the hands of some amazing conductor playing all the symphonies of blazing and burning to bring down the tatters and charcoal ruins of history. With his symbolic helmet numbered 451 on his stolid head, and his eyes all orange flame with the thought of what came next, he flicked the igniter and the house jumped up in a gorging fire that burned the evening sky red and yellow and black. He strode in a swarm of fireflies. He wanted above all, like the old joke, to shove a marshmallow on a stick in the furnace, while the flapping pigeon-winged books died on the porch and lawn of the house. While the books went up in sparkling whirls and blew away on a wind turned dark with burning.

Montag grinned the fierce grin of all men singed and driven back by flame.

If they give you ruled paper, write the other way.

What was your favourite first line
among your own four F books?