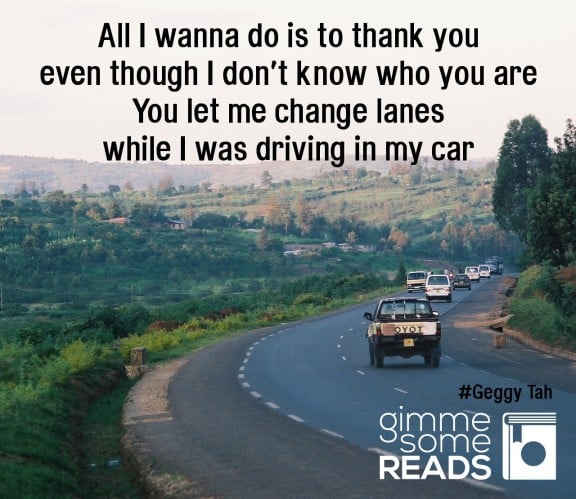 {monday melodies} a song to start your week

Thanksgiving week is already upon us. I’ve been participating in a thankfulness-venture, which I started last year, called thanks-squared. Basically, the month of November becomes a treasure-hunt for thankfulness; each day you look for something you are thankful for and you instagram it — reminding yourself, while sharing it with others.

Here on Gimme Some Reads, I want to start with a word and pair it with reads.

If you are not aware of the band, Geggy Tah, you might be confused by the image-quote above. You should probably take a few minutes and go listen to it » Whoever You Are.

I remember the first time I heard this song. When it sunk in that yes, it was really a song and yes, they did actually just sing those words, I was delighted. It’s oddly normal to think of making up a little song while you’re driving (at least for me). But contrary to the customary driving-angst, the idea of someone singing thanks to a neighbouring driver catches me off-guard with laughter (the solitary surprised “ha!” kind of laughter).

And that is what I love about laughter — that element of surprise; the way it shakes me free from the weight of my circumstances and lets me see with fresh eyes. Whether it’s laughter from sudden awareness, overflowing joy, or tired silliness — I am always left the better for its coming.

I once had a friendship start from a laugh.

In 2008, I had the privilege of attending a conference in Rwanda as a videographer/photographer. The first day my camera and I were drawn to this woman. I was fascinated by her face — strong and lovely; a face with stories. So, I tried to “sneak” a photo. But she caught me — and laughed.

In that moment, Reverend Anastasia and I became friends.

“Laughter is the shortest distance between two people.”
Victor Borge

do you ever make up songs while driving?
has laughter ever surprised you?

9 comments on “Thankful for Laughter”