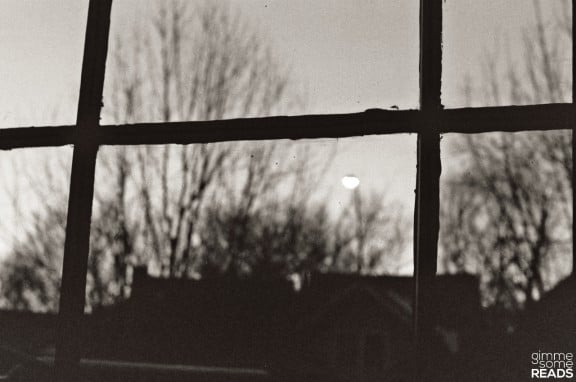 I’ve written poetry since I was ten years old. Never a lot — usually less than fifty a year (and in recent years — a whopping zero). For the most part, my poems tend to be poetic explanations of small exterior/interior moments I experience. They tend to be quiet.

For instance, here is an untitled poem I wrote in January 2008, upon coming in the house one night.

the black tree branches, like artist brushes
against the night sky

the stars, mere pinholes of light, are especially
clear tonight in the smudgy air

i might agree at a moment like this, just stepping
from my car on a fairly ordinary night, glancing
up at a fairly nondescript sky to find the stars
more than luminescent— an unwavering gaze
that i’m the first to look away from

A few years later, I was delighted to come across Rilke’s poem, “Evening,” from his Book of Images, which seemed to even more perfectly describe the moment I had tried to capture in mine.

Slowly evening takes on the garments
held for it by a line of ancient trees.
You look, and the world recedes from you.
Part of it moves heavenward, the rest falls away.

And you are left, belonging to neither fully,
not quite so dark as the silent house,
not quite so sure of eternity
as that shining now in the night sky, a point of light.

You are left, for reasons you can’t explain,
with a life that is anxious and huge,
so that, at times confined, at times expanding,
it becomes in you now stone, now star.

– Rainer Maria Rilke, from A Year With Rilke
(translated by Joanna Macy and Anita Barrows)

Upon first reading Rilke’s poem, I didn’t feel that it replaced my poem or even overshadowed it (though I definitely believe Rilke’s to be more powerful than mine — by far). Somehow when I placed these poems together, the moment expanded, linked arms, and held space for more.

I think that’s one reason I love poetry. No one poem has the final say on a subject. Rather, each one is part of a larger conversation.

Have you ever found an unexpected poem pairing?