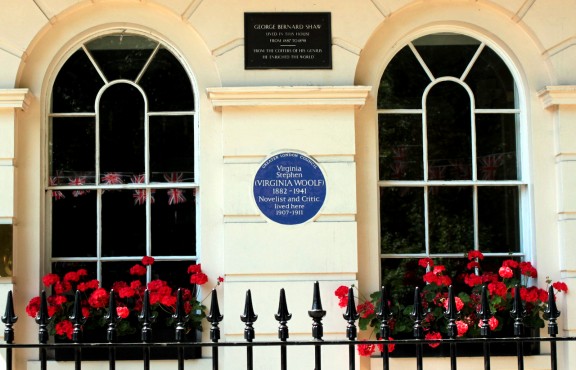 If you’ve ever walked through London, you may have noticed a round blue plaque on a building, in a seemingly random neighbourhood. First initiated in the 19th century to commemorate the homes and workplaces of famous people (artists, politicians and other historical figures), blue plaques are now found in other countries as well.

I’ve always enjoyed stumbling upon a blue plaque (of someone I recognise) when I’m en route to somewhere else. Like this summer, when I was researching a neighbourhood for a writing project and happened to look up and see that both George Bernard Shaw (from 1887 to 1898) and Virginia Woolf (from 1907 to 1911) had lived in this building that I was casually walking past. Such information halts me. 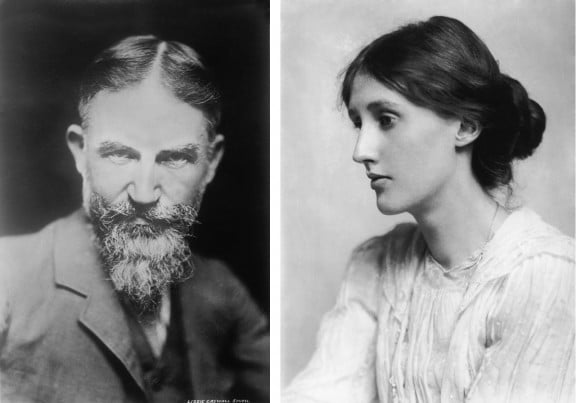 I read one of Shaw’s plays (Major Barbara) in college, and remember liking it, but he’s not necessarily a favourite of mine (though I know his Pygmalion inspired the musical, My Fair Lady, which I do love). And, though I’ve never yet finished a Woolf novel, I know enough of Shaw’s and Woolf’s impact on writing to want to pause and take in the view they saw every day; experience a little of the neighbourhood they called home for a few years, from which they wrote words that have affected people for decades. You can’t quite make it out in the photo, but Shaw’s plaque states that, “From the Coffers of His Genius He Enriched the World”. Wow. Can you imagine having such a thing posted on your house (after you’re dead, of course)?

Shaw resided in this house as a fledgling playwright. Woolf lived here during her first decade as a professional writer and her final years as Virginia Stephen. How did this house, this neighbourhood fit into the stories that filled their minds?

Did Virginia know that Shaw had lived there, too? She moved in just nine years later, and lived in the house during the rise of Shaw’s career. Was she affected in any way? Did either of them run their hand along these rails as they walked by; or, enjoy sitting in the tiny park across the street, hidden from view among the trees and flowers?

How much does what we see on a daily basis and where we come home to every night enhance or diminish our imaginations and world views? Would you rather live in the same house a famous writer once lived in, or just in the neighbourhood? I think it might be too daunting on my down days to know a great writer once walked these same floors. I’d rather live around the corner.