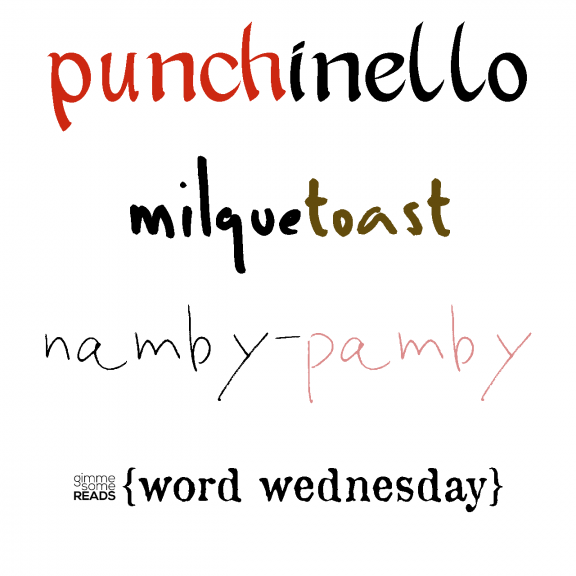 Seriously — no name calling here; just appreciating funny-sounding words with intriguing back stories. Like I mentioned last {word wednesday}, two of the synonyms for milksop caught my funny bone: namby-pamby and milquetoast. I ended up checking their definitions and discovered they were more than just synonyms for milksop — each word had its own backstory.

Starting with the second oldest word first, namby-pamby was born in the mind of 18th century writer Henry Carey when he wrote a poem in 1725 ridiculing the verse (and politics) of Ambrose Philips. Carey formed the word to rhyme with the first syllable of his target’s name.

Namby-Pamby begins with these lines:

All ye Poets of the Age!
All ye Witlings of the Stage!
Learn your Jingles to reform!
Crop your Numbers and Conform:
Let your little Verses flow
Gently, Sweetly, Row by Row:
Let the Verse the Subject fit;
Little Subject, Little Wit.
Namby-Pamby is your Guide;
Albion’s Joy, Hibernia’s Pride.

The name stuck and other Tory satirists began referring to Philips as Namby-Pamby. The poem became heralded as a popular nursery rhyme and soon namby-pamby was a word with its own particular meaning.

Next, we meet Caspar Milquetoast — the reluctant main character of  H.T. Webster’s comic strip, The Timid Soul, started in the 1920s. Webster devised Caspar’s last name by misspelling and compounding ‘milk toast’ (an extremely bland meal good for an anxious stomach). Each comic strip depicts Milquetoast living the life of a doormat; or as Webster describes his character — “the man who speaks softly and gets hit with a big stick”. [I couldn’t find any images that were definitely in the public domain to share, but you can see some here.] Soon Caspar’s last name became a noun — at least in the American vocabulary. 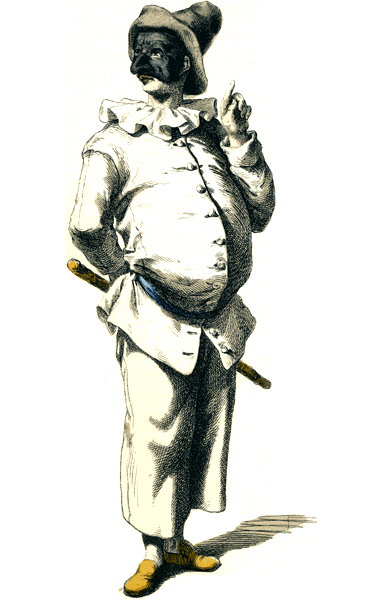 I stumbled across the oldest of these three words in the midst of reading Crime and Punishment. (I’m now 3/4 done!) Raskolnikov is verbally sparring with Porfiry Petrovitch, a police detective, and in a moment of frustration —

“You are lying,” roared Raskolnikov without restraint, “you lie, you damned punchinello!”

I’m curious as to whether this was in the Russian, as well, or if the translator had to choose this to describe a different word. This Italian puppet (depicted above) from the 1660s is the precedent to the more commonly known Punch (of Punch and Judy).

Apparently this puppet character is known for being crafty and defending himself by pretending to be too stupid to understand what’s happening. An intriguing choice for name-calling on Raskolnikov’s part; I don’t yet know if it will prove true of the detective, but it might.

have you come across any good words in your reading lately?