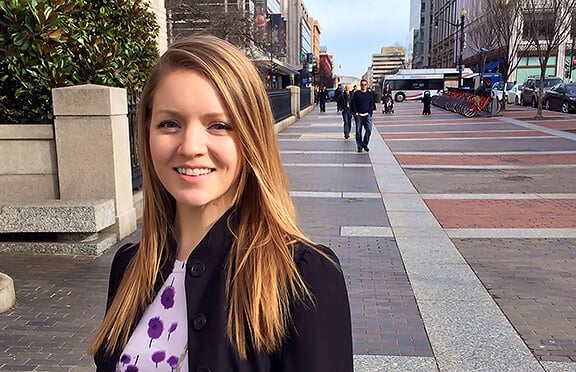 We had a fantastic response to the kickoff to our I’ve Learned series on the blog.  So I’m stoked to continue on today with this post from my friend, Rachel.

I met Rachel over a decade ago when we were both undergraduate music majors at Southwestern College in Kansas.  Nowadays, Rachel and her husband live in Washington, D.C, where she works for the Smithsonian and specializes in all things fundraising, while her husband is a percussionist for the U.S. Navy band.  Let me just say, these two are extremely — like extremely — talented musicians.  For Rachel, part of that comes from being one of 11 (yes, eleven) children in a very musical family, parented by two music professors.  (Shout out to her dad, who was one of my favorite profs!)  But most of her incredible musicianship comes from a lifetime of hard work and love and mega-dedication to her craft, which I admire to no end.

As often seems to be the case with amazing musicians, though, Rachel’s love of all things creative extends beyond music to a number of other creative pursuits as well.  She is a painter, she creates jewelry, she is a writer, she is a songwriter, she sings, she plays a handful of other instruments really well (in addition to the piano, her primary instrument), she is a serious runner, and she’s one of those people who sets her mind to something and just does it.  But more importantly than all of that, she is a really cool friend.  Our paths sadly don’t cross in person that often anymore, living half a country away from one another.  But whenever we do get to connect, good conversations are had in abundance, made all the better by her appreciation for good food and wine.  Yep, my kind of friend.  :)

So without further ado, here is Rachel’s list of 10 things she has learned.  Enjoy!

1. Never handle something twice
My mother is a talented woman. Not only is she smart, industrious, and beautiful, but she raised 11 children, so she knows a few things about keeping a household running. I learned one thing from her that I use almost every day: handle something only once. Once you put that dirty dish or finished book down it becomes exponentially more  difficult to pick up and put away. Handling it a second time takes more brain and body power than simply putting it away in the first place.

2. Ask people to spell their names when you meet them
I love spelling. When I was learning to read I spent weeks mentally collecting words with five letters. Sometimes I still find myself thinking, “oh, that’s a fiver!” (BTW, doesn’t it seem like ‘people’ should be five letters?!) Anyway, I work in advancement so I meet a lot of people and my method for remembering names is to ask people to spell their names. This isn’t always possible, but for some reason it helps cement them in my brain.

3. Keep a quote book
My husband, Jason, and I met in 2000. Even though we were just good friends until 2004 and didn’t get married until 2008, I’m pretty sure he started a quote book for me the first year we met. This list of ridiculous things I’ve said came in pretty handy for him at our rehearsal dinner… Gems like “There’s nothing so much good in the way of trail mix” and “Sometimes you’re cooking and you just get chapped!” come to mind… But now that I think of it, my parents kept quote books for all of us as children and our family has its own running list (“It’s your own free will to weed eat!!”). Not only is it fun to relive these crazy moments later, but it communicates to friends and family that you love them and the moments you’ve shared together.

4. Cut out half
This one’s pretty simple, and something I learned first from one of my favorite college professors: write something, then cut half of it out. You can do this by word count, or—my new favorite—syllable count (you can find a few good counters online). Your writing will be clearer and more persuasive. But the real reason? Let’s face it: ain’t nobody got time to read everything you just wrote.

5. Ask for what you really want. Then don’t say anything.
Okay, this one’s a true fundraising one but really applies to any request you might ever make. Tell the person what it is that you want and why you want or need it. Next, in one sentence, ask for exactly what you want. Then close your mouth and don’t say anything. Whether you’re asking for $50,000 or for your friend to join your running group, giving space to answer not only shows that you’re serious, it shows respect for their answer—yes, no, or maybe. Most important, perhaps, is that it allows you to learn why they answered the way they did.

6. Don’t run into people
We’ve all been there: A person approaches you head on… you both veer to the same side, then lunge to the other side. Two nervous laughs later, you’re nose to nose with a total stranger thinking, “we’re two intelligent people—how could it have come to this?” As a person who loves run-commuting, I’ve spent my last four cities (Chicago, Boston, New York, and Washington) perfecting the art of not running into people. This becomes a very serious matter when you’re weaving through commuters at breakneck speed, but it’s handy in walking life, too. Here are the steps: 1) Tilt your head to the side you’re claiming, and 2) Look at the ground where you plan to go. These should be enough, but if not: 3) Point to where you want to go while tilting your head. You will temporarily look insane, but there will be no doubt about the route you plan to take. Just before you fly by each other on your own respective sides, smile and nod. Happy trails, friends.

7. Seriously consider removing the word “actually” from your vocab
Just do it. You can thank me later. :)

8. Find 20 hours
One of my smart little brothers was telling me the other day about a new study (by Josh Kaufman, I think) showing that while it may take 10,000 hours to master a skill, it only takes 20 hours to learn a new skill. As a person who would have majored in any of 15 different subjects if time and college majors were unlimited, this is good news. That means if you can find about 40 minutes a day, you can learn a new skill in a month! If you’ll excuse me, I have a mountain dulcimer, a wine-tasting kit, and a book on silversmithing waiting for me.

9. Pretend to be the best
Pretend to have the form of Meb Keflezighi and you’ll run better. Pretend to have the voice of Maria Callas and you’ll sing better. This might seem trite or even egotistical, but I’ve found that this approach makes the task at hand (whether it’s cooking or public speaking) easier and it makes my performance better. The act of assuming that you’re highly skilled gives you the headspace to focus fully, which I think is half the battle. Plus, it’s just way more fun.

10. Be grateful
Finally, my favorite: live gratefully. Easy to say, hard to do. Lately, I’ve been keeping a list of moments where I see or feel God’s blessing (if you haven’t read it, Ann Voskamp’s book One Thousand Gifts is pretty extraordinary). It’s amazing how the everyday act of recording these seemingly mundane things makes me both more grateful and more hopeful.