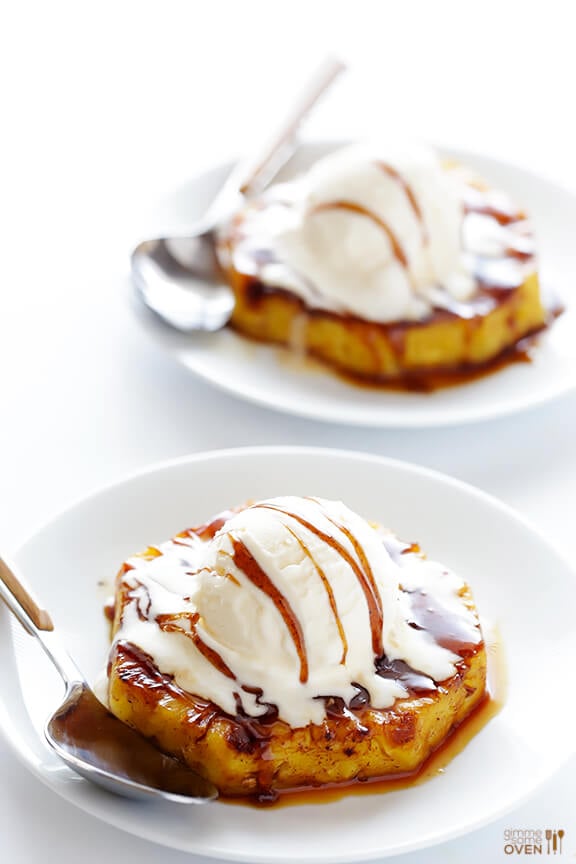 Today I’m bringing back another golden oldie from the Gimme Some Oven archives that is one of my absolute favorite dessert recipes to make in the summer. I had initially entitled it “Flameless Pineapple Foster” when I first posted the recipe back in 2010. But after receiving many puzzled looks and “pineapple what-was-that-again?” inquiries when I served it to friends this weekend, I decided to rename it with a better description of what this delicious dessert actually is:

Oh, and then top this heavenly grilled goodness with a big scoop of vanilla ice cream. Reduce the rum+cinnamon+brown sugar marinade into a caramelized sauce, and drizzle it on top. And then maybe even sprinkle on a pinch of cinnamon, if you’re feeling extra fancy.

Oh, and it only takes about 20 minutes of total prep time.

Oh, and no pineapple “foster” flames are required. 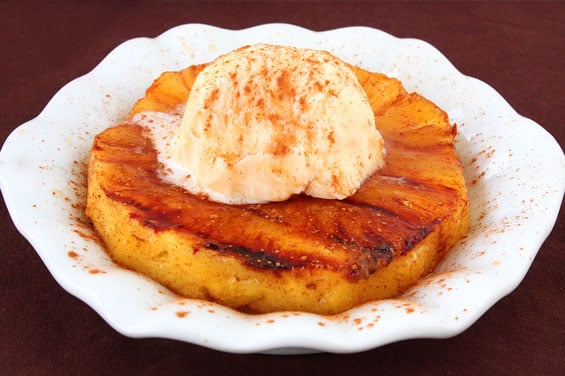 Here’s my original Pineapple Foster photo, circa 2010. I was big into topping everything with cinnamon back then, which is still not a bad idea at all. ;)

I actually “learned” how to make this dessert by accident years ago when I was visiting my friend Courtney in Denver. She’s one of my friends who loves to experiment in the kitchen. And when we found ourselves one evening with a big pineapple begging to be used for dessert, we decided to try just soaking it in rum and making our own version of “pineapple foster” — kind of like bananas foster. Although we realized halfway into it that we didn’t have a grill or any kind of kitchen torch or flames available. So we just marinated the pineapple in a rum sauce and cooked it on a grill pan, and then served it with ice cream.

And if I do say so myself, it was a flaming success.

And I have thus made it countless times since, including this past weekend for a group of friends I had over for a “nacho night”. I was a little concerned that everyone was going to be too full for dessert after pounding plates upon plates of nachos. And when I mentioned “pineapple foster”, I thought that might be true. But then I rephrased it as “rum-soaked grilled pineapple”, and all of a sudden everyone was eagerly hungry again.

Thankfully, they loved it!!! 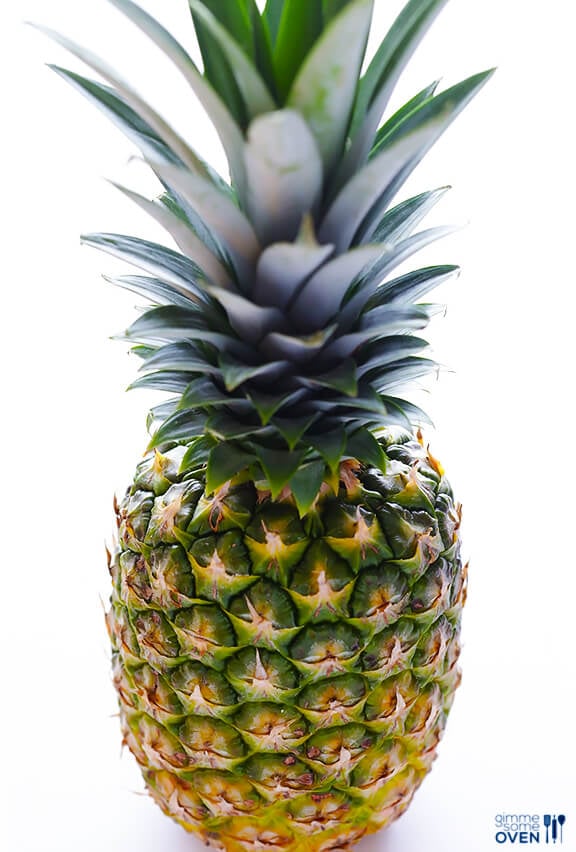 Granted, the selling point may have been the rum. But in my mind, the joy of this dish is mostly thanks to my favorite apple — pineapple.

I’m just gonna say it. Don’t even think about trying this recipe with canned pineapple rings. This recipe is 5 million percent better with fresh pineapple, so find a good one (or even an overly-ripe one), and make it happen. 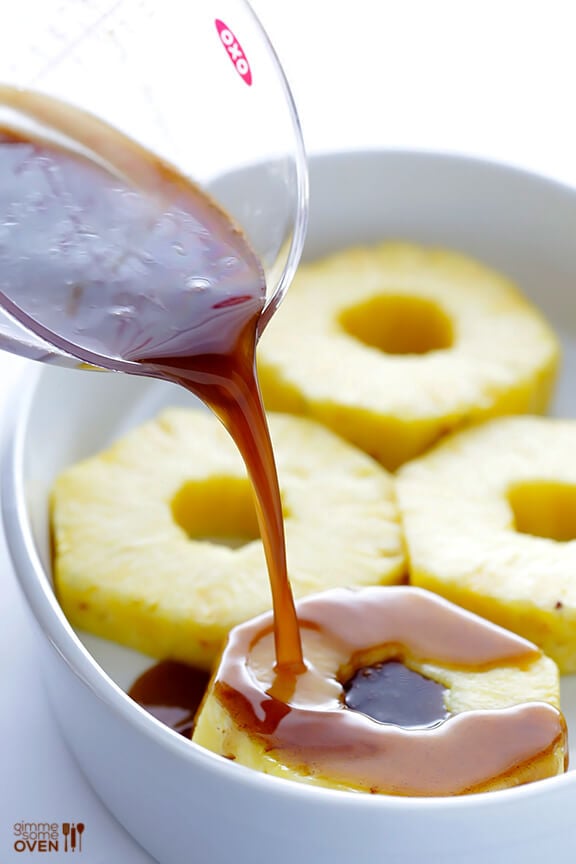 Begin by slicing the pineapple into rings, and using a corer or paring knife to cut out the core in the center of each ring. Place the pineapple rings in a large baking dish, and then pour the whisked rum/cinnamon/brown sugar mixture on top of them to marinate for between 10 minutes to 4 hours. 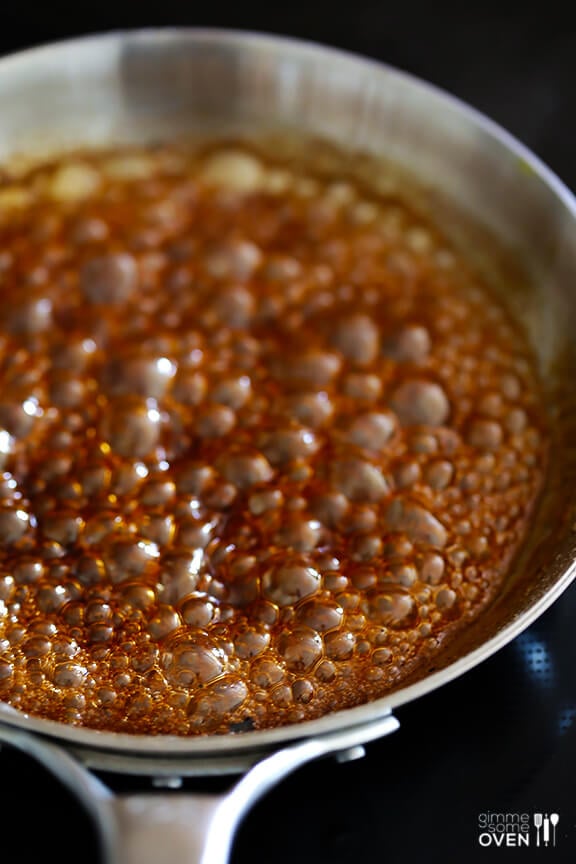 When you’re ready to grill the pineapple, first drain out the rum marinade from the baking pan and pour it into a saucepan. Bring the sauce to a simmer, and then let it cook until it is reduced by half to make a super yummy and caramelized sauce for drizzling. 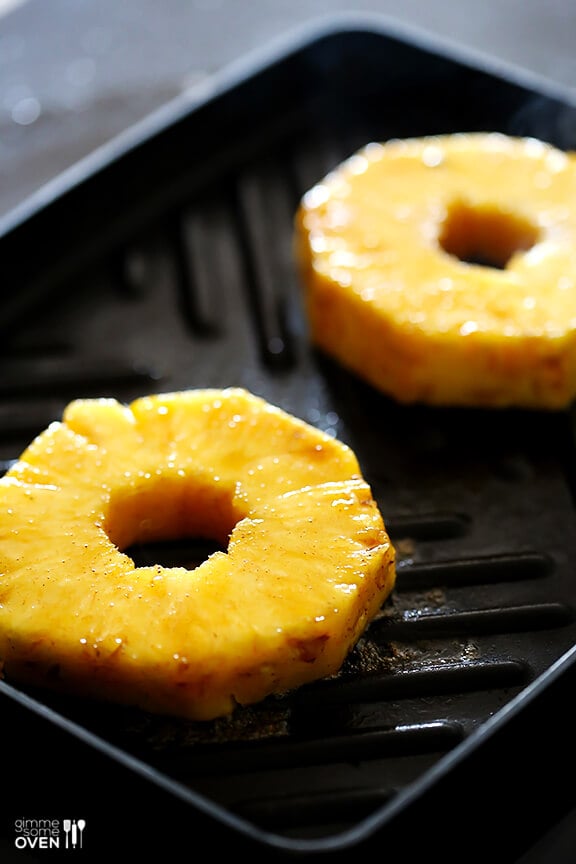 While the sauce is cooking, pop those pineapples on the grill! I like using a grill pan for this one, but you can also use a saute pan or even an outdoor grill. (Heads up — this one may smoke up your kitchen just a bit.)

Simply grill the pineapple rings for about 1-2 minutes per side until those golden grill marks appear. 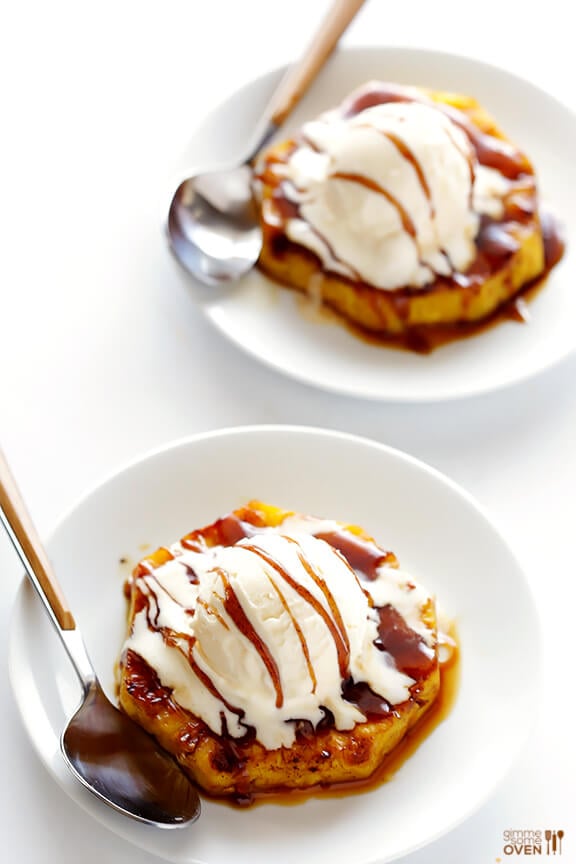 Then transfer the pineapple rings to serving plates, top with ice cream, drizzle with the rum sauce…. 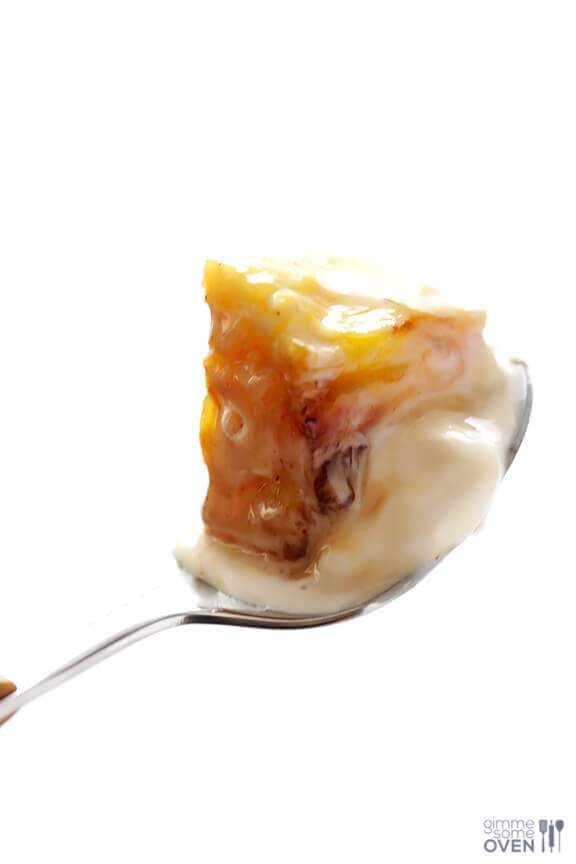 See?? I told you this recipe shouldn’t be hiding away in the archives. :)

How To Cut A Pineapple | 1-Minute Video

This easy take on pineapple foster doesn’t require any flames! Just soak your pineapple in this delicious rum, cinnamon and brown sugar mixture, grill it up, and top it with vanilla ice cream. Delish! 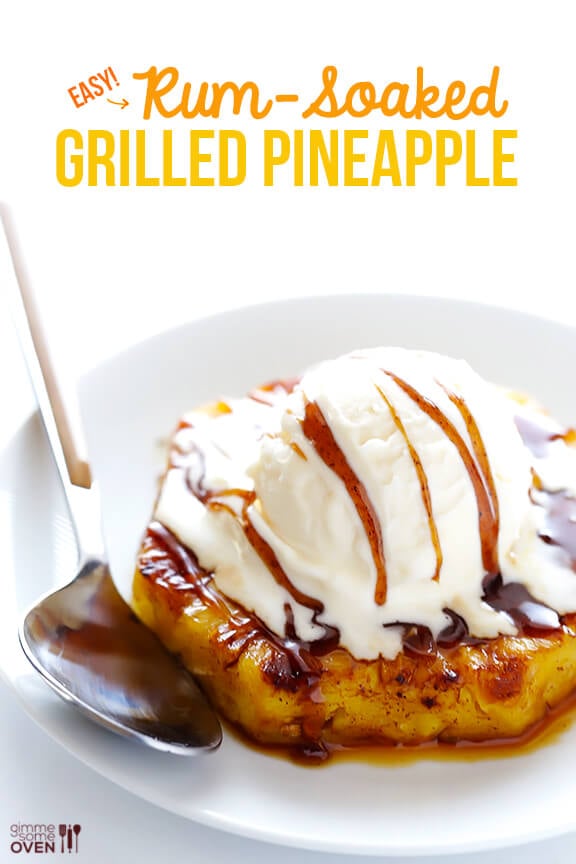 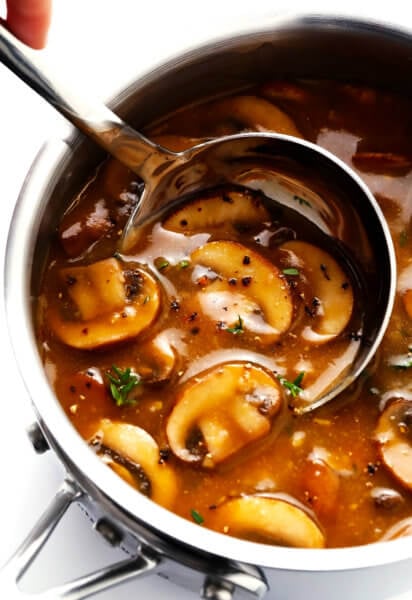 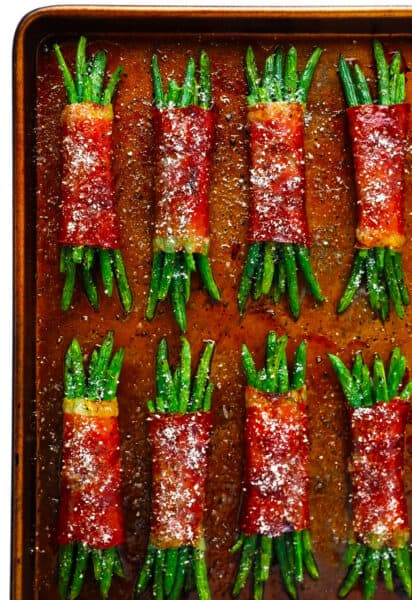 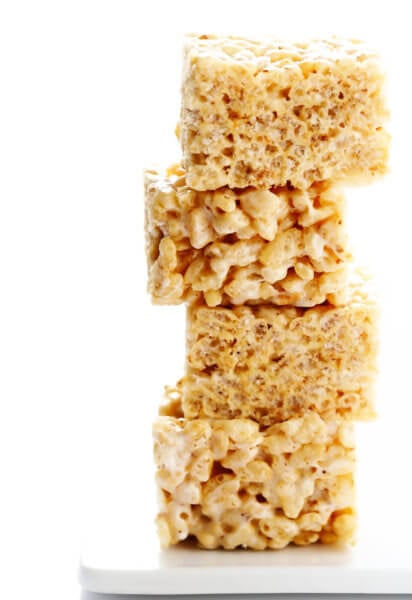