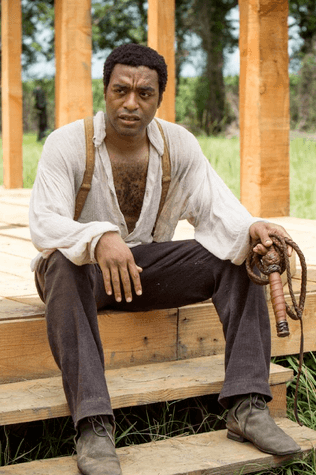 12 Years a Slave is a faithful and bold adaptation of Solomon Northup’s 1853 autobiography of the same name. British director Steve McQueen gives us an unblinking account of Northup’s abduction into slavery in 1841 and his attempts to “not just survive but live.” McQueen’s style is assured and minimalist—this period of American history needs no dramatization. The truth is harrowing enough.

Chiwetel Ejiofor astounds as Northup. It’s a star-making, Oscar-worthy performance. There’s a scene toward the end, in which Northup attends a slave funeral. The camera stays on Ejiofor’s face; off-screen, the other slaves sing. With little movement and no dialogue, Ejiofor conveys all the emotions Northup has faced during his 12-year trials before deciding to join in the song…in defiance, in sorrow, in hope. It’s a microcosm of the entire film in one moment, and it’s brilliant. Ejiofor is brilliant.  You could also fill a whole supporting actor/actress Oscar ballot with the rest of the cast, including Michael Fassbender, Paul Dano, Benedict Cumberbatch, Brad Pitt, Alfre Woodard, and film-newcomer Lupita Nyong’o, who plays the pivotal role of Patsey, one of the film’s most tragic characters.

I say “characters,” but that’s wrong. Patsey was no character; she was a living, breathing human being. We don’t know what happened to her after Northup leaves the plantation they both lived on. But this is the gift of 12 Years a Slave: It gives names and faces and bodies and voices and souls to our history’s ghosts. It forces us—quite literally, in McQueen’s long close up shots—to look that history in the eye. To remember, to reckon, to repent.

» Read more about the book Twelve Years a Slave

» Read a few quotes from the book