The Counselor Is a Cautionary Tale 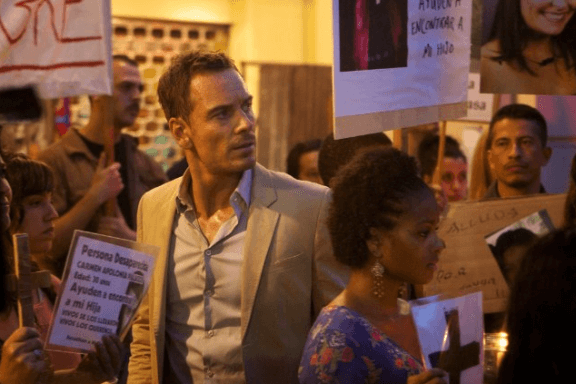 In one of the better scenes in The Counselor, a wealthy lawyer (Michael Fassbender) buys an engagement stone from a monoglogueing dealer. Many of the characters a Cormac McCarthy protagonist encounters are philosophical, and this diamond seller is true to form. He holds up a beautiful specimen and declares it a “cautionary stone,” and speaks of humans’ hope “to partake in the stone’s endless destiny…At our noblest we announce to the darkness that we will not be diminished by the brevity of our lives. That we will not thereby be made less.” But this story is not about people at their noblest. Oh, no. It’s about people who choose see the diamond’s price but not its lesson…and the inevitable, bloody consequences of those choices.

The Counselor is also (unintentionally) about the consequences of filmmaking choices that, oh, let’s say, decapitate a film’s chances for singularity, for hypnotism, for depth.

Ridley Scott (Bladerunner, Alien, Thelma & Louise, etc., most recently, Prometheus) directs this uneven cautionary tale with characteristic energy and suspense. Novelist, legend and personal favorite Cormac McCarthy wrote the screenplay. Several McCarthy novels have been adapted into films that complement the books’ graphic poetry—the Coen brothers’ No Country for Old Men being the prime example. But in The Counselor, McCarthy’s meaning gets lost in the motions, vulgarity serves no discernible purpose, and the image is no match for the (mighty fine) monologues.

I first blamed Scott for the lack of compelling visuals to underscore the heft of McCarthy’s dense spoken lyricism. The composition is competent. The camerawork and editing is proficient. But what this film needed is a visual argument with as much muscle as McCarthy’s best lines (let’s not speak of his worst), and we don’t get one. The most hard-working visual sequence is the one pictured above, which briefly shows the larger societal consequences to the games The Counselors’ characters are playing. Ultimately, this lack of supporting visual imagination is the director’s fault, but it also might be McCarthy’s.

The waiter at my theater was also McCarthy fan and assured me that some of the screenplay was  online, and, indeed, I found a few excerpts here. Although the screenplay format does encourage simplicity, I was struck by how little of the imagery I expect from McCarthy was present. Note the first line of McCarthy’s novel All the Pretty Horses: “The candleflame and the image of the candle flame caught in the pierglass twisted and righted when he entered the hall and again when he shut the door.” This is the stuff of screenplay adapters’ dreams—the images are all there, right in the text. Now take the first lines of McCarthy’s screenplay for The Counselor: “The counselor’s condominium bedroom. The curtains are drawn and it is all but dark in the room.” There is something to be said for humble expediency in film writing, but I wish some of the novelist’s description would have ego’d its way into the screenplay. Maybe Scott would’ve followed its lead.

What the film also needed was a true femme fatale. Cameron Diaz seemed out of her element here as the amoral, predatorial Malkina. She simpered when she needed to scorch, and the last lines of the film had no bite in her jaws. The aforementioned waiter suggested replacing Diaz with Charlize Theron. My friend Nathan offered Angelina Jolie. I would’ve like to have seen Kristin Scott Thomas transform the role. The rest of the lead cast (Javier Bardem, Penelope Cruz) handled themselves respectably, with Brad Pitt’s trademark effortlessness notably buoying up the stylized dialogues’ back-and-forth. But the hole left by Diaz—more Cruella than Cathy Ames—gaped painfully.

Which highlights another downfall of the film: While diamonds and death and choices and consequences all get the Shakespearian treatment, the sex is spectacularly silly. The film starts with a talky bedroom scene that has none of the weighty elegance of some of The Counselors‘ other conversational encounters. It could’ve been a window into why The Counselor and Laura are so in love, but it’s not. We’re left to fill in the blanks of this high-stakes relationship on our own, though Cruz infuses as much emotion as she can into her character’s screen time. We’re also subject to an absurd locker room tale told by Reiner, starring Malkina. At the end, The Counselor asks Reiner, “Why are you telling me this?” My question exactly. “I don’t know,” Reiner answers. Neither do I. The porno-strange story serves to shock, not much else, and as unforgettable as the weirdness may be, it doesn’t move the plot or the theme forward at all.

So go see The Counselor for a few truly amazing monologues and a virtuosic verbosity rare in modern movies. But don’t say I didn’t warn you of whiplash. The highs are highs, but the lows are low, my friends.

Would you re-cast any of the characters in The Counselor?

12 comments on “The Counselor Is a Cautionary Tale”