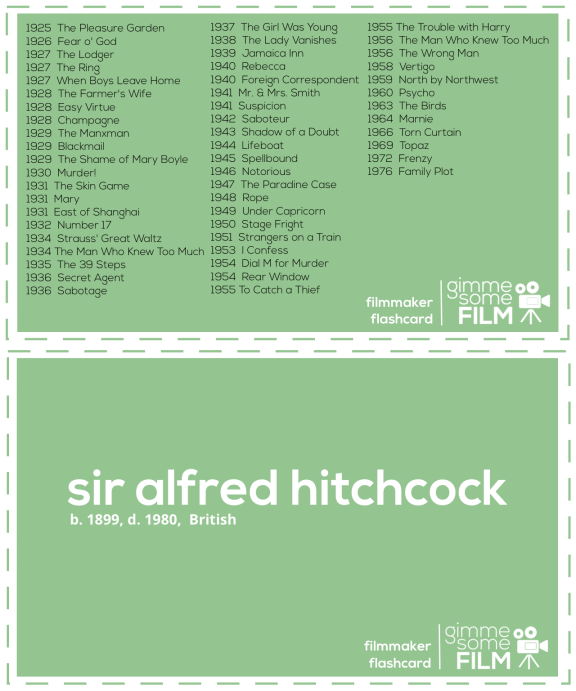 In honor of the new biopic Hitchcock, here’s a filmmaker flashcard to start your week. A prolific master of suspenseful storytelling, Hitchcock’s name has become synonymous with shivers, and rightly so. I have a lot of his early British works to catch up on, but have been a big fan of the later Hollywood films since high school. Rear Window (with Jimmy Stewart and Grace Kelly), Vertigo (with Kim Novak and Jimmy again) and North by Northwest (with Cary Grant and Eva Marie Saint) are all on my drop-everything-if-this-is-on-and-watch list.

The new film is directed by Sacha Gervasi (director of the well-received rock doc Anvil: The Story of Anvil and writer of Spielberg’s The Terminal) and stars another knight, Sir Anthony Hopkins, in the title role. The story focuses on the filming of Psycho and Hitchcock’s relationship with his wife, screenwriter Alma Reville, played by Helen Mirren. Critics are very mixed on this movie (only a 61% rating currently at Rotten Tomatoes), but Hopkins and Mirren seem to be getting approval for their portrayal of the couple. Roger Ebert gives the film three stars but suggests you’ll learn more about Hitchcock as a filmmaker from director Francois Truffaut’s book-length interview with him, first published in 1967. I’m adding it to my reading list right now.