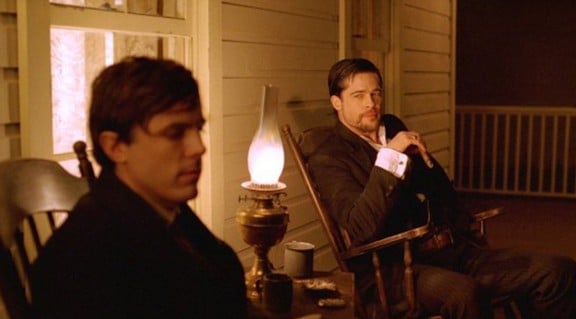 Today’s post is guest-written by smart-film-guy and frequent-Gimme-Some-Film-commenter David Huffman. David is a full-time writer, producer, and Chief Creative Officer for Capstone Entertainment Group. Like them on Facebook; they’ve got some cool stuff in the works! In talking about the new Andrew Dominik film Killing Them Softly, I mentioned that I didn’t remember loving his 2007 film The Assassination of Jesse James by the Coward Robert Ford. Turns out, the film is one of David’s favorites; I asked him to tell me why. Then I put the film at the top of my queue. Take it away, David!

1. There’s nothing wrong with it.

I am aware that “You made no mistakes” isn’t the highest praise, unless you’re competing in the olympics or a spelling bee.  Or I guess if you’re a surgeon.  But it’s a good place to start.

I have yet to hear anyone file a real complaint against the film, other than, “It’s too long.”

But no one can say the music is bad, or that any of the acting is stilted, or that this section of the story is confusing, or that the costumes weren’t authentic.  Because it all works.  And I can’t for the life of me find a story thread, character arc, or even a sequence to trim, in order to shave the 160-minute runtime.  James Cameron’s Titanic runs 194 minutes, Avatar 162 minutes, and those are two of the highest-grossing films of all time at the box office.  I don’t buy that The Assassination… is too long.

I can base my recommendation to watch this film on the facts—the empirical evidence that permeates this all-star creative team.  Aside from Andrew Dominik, who had previously only helmed one indie film called Chopper, which is an incredible piece, with an amazing performance by Eric Bana, let’s see who else contributed:

Roger Deakins – Director of Photography (The Shawshank Redemption, Skyfall, the Coen Bros. movies & every other film you love going back to the ‘70s)  This is one of the most beautifully shot films ever put on screen.

Ridley and Tony Scott – Producer & Executive Producer (We all know these guys, right?)

Cast – Brad Pitt, Casey Affleck, Jeremy Renner, Sam Rockwell, Sam Shepard, Mary-Louise Parker, Paul Schneider (Parks & Recreation) and the amazing character actor Garet Dillahunt (You may have seen him in the recent Looper).  Zooey Deschanel even sneaks onto the screen and manages to not be annoying.

The chemistry, the tension, the fears and desires and emotion that all of these talents inject into the world and its rich characters make this a film one doesn’t simply watch.  One absorbs it.

3. It complicates the legend without ruining it.

Like Spielberg does in Lincoln, The Assassination of Jesse James… shows that the person was a legend, yes, but also a human.  And while doing this, it in no way diminishes the legend.  It wonderfully complicates it.  Enriches it.  I prefer the complicated versions of history, and Dominik’s vision of Jesse James is one of the most compelling, and haunting, of any legend I’ve seen on screen.

4. It was made amidst great adversity.

This one is a very long story.  Here is a brief synopsis:

At one point, Ridley Scott and Brad Pitt edited their own version of the film—the short, action-packed version Warner Bros. wanted to see.  And the test audience responded with a resounding…

I believe many of the intangibles that make us fall in love with most of our favorite movies come from the passion and fire and grit it took to just get the thing made in the face of great obstacles.

Sports are pretty popular.  We like watching our favorite sports teams compete because we put great stakes into our hope for them to win.  I believe the film experience should be no different.  I don’t mean the hero, or main character, always has to “win” per se, but the film should.  A film “wins” with its payoff, like a game-winning, buzzer-beating three-pointer, or a bottom-of-the-ninth home run.  Even if the hero dies, like in…well…this movie.  And Lincoln for that matter.

Jesse James pays off emotionally for me.  Every single time.  Not with tears, like Good Will Hunting.  Not with laughter, like Groundhog Day.  Not with joy, no, elation, like The Shawshank Redemption.  But with breathlessness.  Yes, it’s the old cliché, “It takes my breath away.”

This film methodically, slowly, pushes me toward the edge of a very high cliff until, at the end, I finally cross the threshold and drop into the open air.

Then at the last second, it grabs the back of my shirt, and I’m able to breathe again.

And like a child to his dad, who just did something cool, I say, “Do it again.”

What films make you say “Do it again”?

Don’t forget to sign up to win one of two Hulu Plus giftcards! The giveaway runs until 12/16!