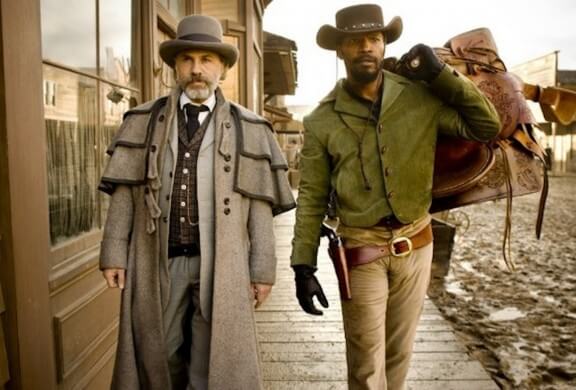 When faced with tragedy, some of the most comforting words you can hear are “That should’ve never happened.” The assertion of the wrongness of reality is strangely comforting. With Django Unchained, as in Inglorious Basterds, Quentin Tarantino takes that righteous anger one step further to “And here’s what should’ve happened instead.”

Tarantino paints a guns-blazing, upside-down world—a Southern-Western that brings bulleted justice to one plantation in an over-too-fast 165 minutes. It’s one of the most alive films I’ve seen since, well, Inglourious Basterds. Tarantino is an exuberant filmmaker. He uses every trick in the book, from gorgeously framed silhouette still shots to quick zooms to extreme close-ups. Injuries spurt. Smoke curls. Stuff moves. As bounty hunter Dr. King Schultz (Christoph Waltz) says of Django (Jamie Foxx), it can be said of Tarantino: “My friend has a flair for the dramatic.” He’s not afraid to highlight the quintessential gesture, as in the trailer-featured moment when Django slo-mo shrugs off his rough slave blanket at the start of his transformation into a bada$$ bounty hunter.

He’s a lover of stories, Tarantino. He weaves all kinds of tales around Django’s quest to find and free his wife. Wagner’s operatic tale of Brünnhilde (whom Django’s wife is named after), spaghetti Western tropes, grand romance traditions, mini-stories in each soundtrack song (featuring everyone from Johnny Cash to John Legend), the tried-and-true rhythms of a Hero’s Journey. There’s also a lot of terrifying truth underpinning this revenge fantasy as well. This film is no history lesson and doesn’t pretend to be, but it does put a swinging lantern light up to the evil our country tolerated—and supported—for nearly the first century of its existence. 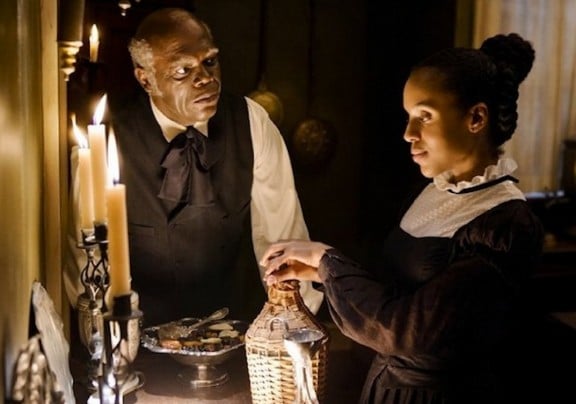 Personifying this evil? A top-of-his-game Leonardo DiCaprio as plantation owner Calvin Candie. (That bloody hand? It’s real.) Staring down DiCaprio’s scarily dead eyes is an electrifying Foxx, with the can-you-believe-how-lovable-this-guy-is-after-seeing-him-be-so-dispicable-in-Inglorious-Basterds Waltz at his side. In an impressive character role, Samuel L. Jackson makes Candie’s head slave both repugnant and pitiable. My only acting complaint is that the superb Kerry Washington (Broomhilda) wasn’t given more to do. (There were plenty of guns on the floor in the final showdown…why not let a girl pick one up and take a few shots of her own?)

The film is a satisfying story, both gory and funny as hell. It would be pure entertainment…if I could forget those blood-soaked plantation walls are in my own backyard. In the real world, we can’t right those wrongs with one glorious explosion. It’s slow, messy work to fight racism and other forms of systematic oppression in daily life. Django Unchained is both a fantastic escape from our trudging national journey towards justice and a (wacky, over-the-top, and controversial) call to keep on going.

Good for: Fans of spaghetti Westerns, historical themes, audacious filmmaking or all of the above.

Snack on: Foamy beer, which enjoys a few close-ups of its own in the film.

Bring your: Ability to talk about tough subjects for post-watch conversations.

Skip if: You don’t do movie blood.

How did Django Unchained make you feel?

0 comments on “{in theatres} Django Unchained”