{in theatres} Life of Pi 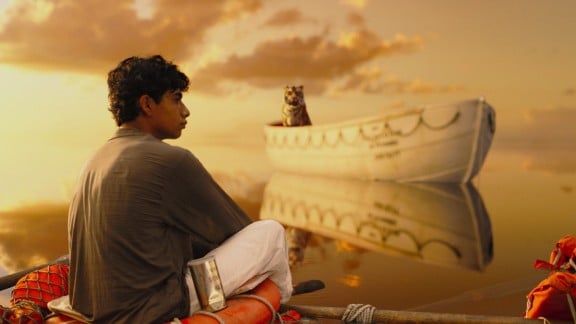 Every frame was carefully considered and crafted by director Ang Lee (Brokeback Mountain; Crouching Tiger, Hidden Dragon; Sense and Sensibility) and cinematographer Claudio Miranda (The Curious Case of Benjamin Button, TRON: Legacy). From the opening scenes detailing young Pi’s life in the “French Riviera of India” to later scenes like the stunning sea-sky-scape above, I wanted to press pause, so I could take more time to appreciate the images.

The use of 3D was genuinely immersive. I felt drenched, I felt abandoned, I felt alone. I felt attacked. You know there’s a tiger in this movie, right? There’s  a tiger. His name is Richard Parker, and Lee doesn’t resort to cheap gotcha! jumps to make him scary…but I did scramble back in my seat more times than I’d like to admit. (Once right in front of my poor in-theatre-dining server. Embarrassing.) The use of 3D was so effective that I forgot to take notes during some key action sequences. Me. Forgetting to take notes.

It’s been a few years since I read the original book by Yann Martel. So I can’t give you an in-depth analysis of the screenplay adaptation by David Magee (Finding Neverland, Miss Pettigrew Lives for a Day. But I can tell you this: It works as a story on screen, and it left me with the same exultant feeling the book did. For me, those are the two main requirements for any adaptation: Tell a story successfully in the new medium and retain the emotional core of the old. Life of Pi did both.

Along with Lee, Miranda and Magee, first-time actor Suraj Sharma should share credit in the film’s engrossing qualities. I believed his performance, even during what must have been a difficult, never-ending shot: One long, slow zoom in on Pi’s face as he relates an emotional monologue. It’s a (or the) pivotal moment in the movie, and Sharma carries it like a vet.

As to the film’s meaning…to quote the older Pi, “Why should it have to mean something?” When a film is this beautiful, I’m not sure it should have to. But Pi also says, “The story is yours now.” I’m curious what meaning you’ll give to it after you leave the theatre.

Good for: Fans of beauty and engrossing story-spinning

Snack on: Sushi. Pi does. Or bananas, for vegans and primates.

Skip if: You have a water phobia…there’s lots of it in this film.

What does Life of Pi mean to you?