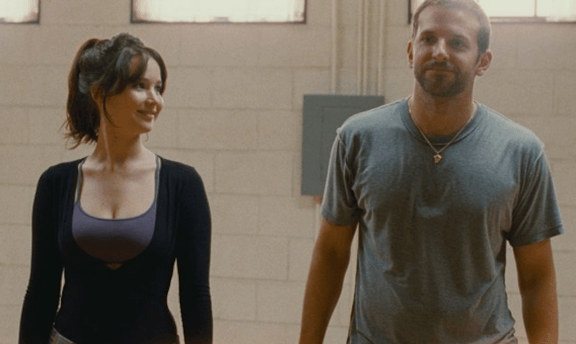 Ok. *Deep breath* I have a confession to make: I did not love this movie. I’ve put off writing about this film for almost three months, and now it’s time to come clean. Please argue with me in the comments section if you love it—and know that the Academy clearly agrees with you. (But commenter David H. doesn’t.)

I think I procrastinated writing this post for so long because I wanted the reasons for my dislike of the octo-nominated movie to be more complicated. But I haven’t read the novel by Matthew Quick for an in-depth literary analysis. I don’t really have much to say as far as social commentary on mental illness goes. All I’ve got is this:

The story didn’t have the internal consistency necessary for belief, and it didn’t have the momentum necessary to keep me interested. I loved (Oscar nominated) Bradley Cooper in Alias, but here, I never felt he completely settled into the role. He seemed to be Putting On Mental Illness, not playing it from within. If that makes any sense. And the shift at the end from Cooper’s wide-eyed-and-delusional wounded anti-hero to googly-eyed-but-in-control romantic lead was too fast and too easy. (Oscar nominated) Jennifer Lawrence (loved her in Winter’s Bone and The Hunger Games), as a grieving young widow, was more convincing. But, again, I felt the script and direction kept her (literally) dancing on the surface of the story instead of digging into it.

I have liked David O. Russell’s previous work. He did a better job of balancing the sober and the silly in The Fighter, for example. Silver Linings Playbook‘s tone was uneven: Sometimes it seemed the film’s major players (actors, director, editor and composer) had entirely different ideas on what particular scenes were about. There were moments I genuinely enjoyed, (the main characters’ first conversation about medications, the dance competition routine) but I wasn’t thoroughly drawn in. I wasn’t engrossed. I was unsatisfied with a film I was fully prepared to love. Sigh.

What did you think about Silver Linings Playbook?