Spike Jonze’s Her Delights and Provokes 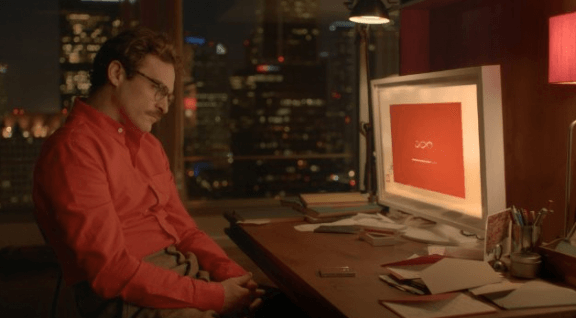 Let me say right up front that I liked Her. I really, really did. Please remember this when you get to the crabby part of this review ahead and either get huffy with me or consider skipping seeing it altogether. Promise you’ll remember I like it, OK? OK.

Her is high-concept in the service of actual concepts, and I mean that as a huge compliment. While the robot-girlfriend idea has shown up in pop culture since whenever the idea of robots came about, Her prods, twists and pulls the trope in fresh ways. It uses the set up to explore questions about relationships in the future-modern world: How do we connect? Can love survive change? What defines intimacy? What makes a relationship real?

Theodore (Joaquin Phoenix) is stuck. He’s unable to sign his divorce papers, unable—or unwilling—to climb out of his melancholy, and married to a job that lets him express the emotions of others all day long without having to risk having any of his own. (BeautifulHandwrittenLetters.com … I can’t believe no one has swooped in and bought that URL yet.) As in many romance movies, a girl comes along to unstick him. Except she’s, well, more than a girl. She’s an O.S. An operating system (played by Scarlett Johansson).

Theodore uploads this O.S., who (which?) is able to communicate and learn, and who (that?) chooses the name Samantha for herself (itself?) Theodore’s life is never the same. He and Samantha bond, help each other grow, and fall in love. They even experience a kind of other-plane physical intimacy, in a scene that will either make you squirm or make you smile, depending on your views on audible explicitness, and your position on human-computer relations.

Joaquin Phoenix is remarkable. Much of the film is constructed out of long close up shots as he talks to Samantha. He’s playing out the emotional story of two, um, beings (I can’t say people, or can I?) on a single face. Cinematographer Hoyte Van Hoytema’s (Let the Right One In, The Fighter, Tinker Tailor Soldier Spy, Nolan’s upcoming Intersellar) captures luscious images, especially in the sun-drenched magical days Theodore and Samantha spend “together”. The soundtrack is gorgeous, including Arcade Fire, Karen O., and more. The production design is flawless, putting us solidly in a near-future world, where everything seems familiar yet vaguely tomorrow-y, all at the same time. (Spoiler: High-waisted men’s pants are making a comeback sometime soon.) The dialogue manages to be believable and at the same time deliver some very quotable lines, bound to show up on your Pinterest ad infinitum: “The past is just a story we tell ourselves.” “Falling in love is a crazy thing to do. It’s like a socially acceptable form of insanity.”

That second one is spoken by Amy (Amy Adams), Theodore’s sympathetic friend, and one of the human connections he rekindles after Samantha coaxes him back into the land of the living. Adams is fantastic, as always, here. She gives the film a much-needed point of reference on how we are meant to view this relationship—non-judgmentally. “Is it not a real relationship?” she asks, and she reveals she’s become BFFs with her own O.S. But judge, we must, at least just a little, especially when the cracks begin to show. (And with some help from Theodore’s disapproving ex-wife, played by Rooney Mara.) The faults of this binary-biological pairing are remarkably similar to “normal” heart troubles, though, which brings us back, again, to self-reflection.

And here is the crabby part. I am all for intellectual, curious, funny, conversation-starting, make-you-reflect films. And that is what Her is. But it is also, supposedly, a love story that should  stir my emotions. The film was literally introduced at my screening with: “If you’re not crying by the end, you have no soul.” Guilty as charged, I guess.

I was not moved by Her. I was delighted and compelled and provoked and tickled, but not induced to tear up. And neither were the three friends with whom I attended the screening, though the woman next to us sniffled quite a bit. I’ve been trying to figure out why I was untouched. My friend Maux says it has something to do with Samantha being voiced by such an iconic actress. That may be so. I also think that I never fully invested in Team Samantheo because it seemed a dubious prospect from the start. But so is Romeo and Juliet, and I manage to feel some sympathy for them (at least when they’re played by Claire Danes and Leonardo DiCaprio). I’m still puzzling it out. I may be prejudiced against animate-inanimate relationships. I may be too attached to the idea of incarnation, of the sacredness of matter, of bodies, of things. I may be love-cynical; maybe I need my own sentient O.S. to cheer me up. Or maybe I just wanted a little tiny bit more of the possible happy ending the film’s last moment suggests.

Were you moved by Her?

0 comments on “Spike Jonze’s Her Delights and Provokes”