It’s my second-to-last day at the Sundance Film Festival, and it was a good one. For starters, I got into every film I tried to (a first for this trip). For second, I enjoyed all three. And for third, I skipped movies tonight and hung out with my housemates and their friends. I definitely felt like I snuck onto the cool kid’s table as I heard about the documentaries they’re finishing up, the film programs they are running, the festivals they are programming, and the films they are shooting. I had such a great time listening to this fascinating crew’s stories. But onto the movies, right?

When you consider that a lot of this film is two beautiful people wandering around Williamsburg and listening to music, it’s a miracle it’s so freakin’ likable. This is not a hipster flick. Anne Hathaway and Johnny Flynn play an unlikely pair who are (mercifully for us) shy and unsure how to connect under the unfortunate circumstances that bring them together. They hesitantly become closer over shows, walks and talks by the water…all the while tiptoeing around a couple big elephants in the room. The music, written by Jenny Lewis and Johnathan Rice is beautiful. Their work fits the characters so well that during the screening I forgot they were the composers and kept thinking about how I needed to look up Johnny Flynn’s music. (Also a credit to Flynn’s compelling performances of Lewis and Rice’s songs.) Song One is a sensitive love story between the main characters and the music that saves them. 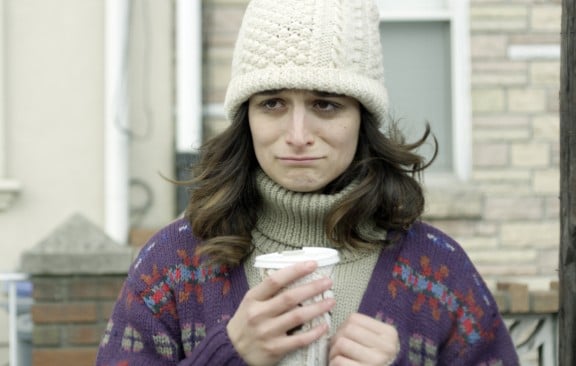 Obvious Child has gotten the nickname “the Abortion Rom-Com”, both rightly and wrongly. Rightly, because it is obviously rare for abortion to figure into a romantic comedy; especially one that maintains many of rom-com’s more sacred genre rules. (Meet cute-ish, BFF with an attitude, the coincidental run-ins, the protagonists not telling each other stuff, etc.) Also rightly because the story line is given weight, complexity and humor. Wrongly so because the nickname reduces this smart, sweetly crass comedy to one issue. Instead, maybe we should call it the Jenny Slate Rom-Com. She’s alternately hilarious and vulnerable as Donna, a stand-up comic who’s life is changed by a drunken night with “the nicest stranger ever” (Jake Lacy). Another name: That Nicely Paced Rom-Com. Or A Rom-Com With an Intelligent Script For Once. Or, The Yay Gaby Hoffman We Love Gaby Hoffman Rom-Com. Any of those will do. I imagine you’ll be hearing a bit about this film because of the subject matter, so remember there’s more to it than the headlines.

Kumiko, the Treasure Hunter is a playfully serious look at the powerful reality of stories. The Zellner brothers got the idea for Kumiko, the Treasure Hunter from a factual tale that eventually became Minnesotan legend, with all kinds of different versions. The story’s disputed origins become deep background for a beautifully shot, deadpan tale about a Japanese woman who is utterly convinced in the reality of something that cannot possibly be true. We watch Kumiko sacrifice everything to chase her dream, and we sympathize with those who really, really want to help but just can’t cross the chasm along with her. (People in Minnesota sure are nice, aren’t they?) Plus, there’s a really cute bunny. Good stories and cute bunnies: Never underestimate ’em.