Sadly for my movie-loving heart (but just in time for my quickly weakening immune system), I’m heading home from the Sundance Film Festival 2014. But I had a smashing last day: Sunshine, gifted tickets, readily available soy milk and vegan sandwiches, meeting someone who works for one of my favorite production companies in line, and seeing a former co-worker’s work get a standing ovation. Oh, yes, and there were some very fine films, too. Read below for my last installment of Sundance mini-reviews. I’ll be following up this daily coverage with some after-Sundance posts, including interviews, to-see lists, and more. Thanks so much for being a part of my first Sundance trip and giving me a reason to write every night!

A Most Wanted Man

Rachel McAdams and Philip Seymour Hoffman in Anton Corbijn’s A Most Wanted Man.

I was first introduced to Anton Corbijn’s arresting images through his work with U2, and I was a big fan of The American in 2010. So I had no problem getting up bright and early wait in line to see Corbijn’s newest, A Most Wanted Man. The film is an adaptation of a John le Carré novel, and as such, is a more traditional espionage film than The American was. A moody and intellectual spy thriller with moments of wry humor, A Most Wanted Man boasts a deep-bench cast that can hold their own inside Corbijn’s brilliantly composed frames. Philip Seymour Hoffman is a rumpled, chain-smoking, piano-loving agent based in Hamburg. Günther Bachmann’s anti-terrorism group does the dirty work the German government doesn’t want to admit to doing…or can’t hand off to the Americans. He’s slowly working his way up a terror-linked financial chain, and he may have found his bait in a new illegal Chechen immigrant (Grigoriy Dobrygin) with complex loyalties. But he’s not the only one with designs on the man. In one pause in the game, Bachmann’s American counterpoint (a razor-sharp Robin Wright) says she keeps telling herself the reason they do what they do is to make the world a safer place. Using the genre’s subtexts and shadows to great effect, Corbijn’s engrossing film asks, “But for whom?” 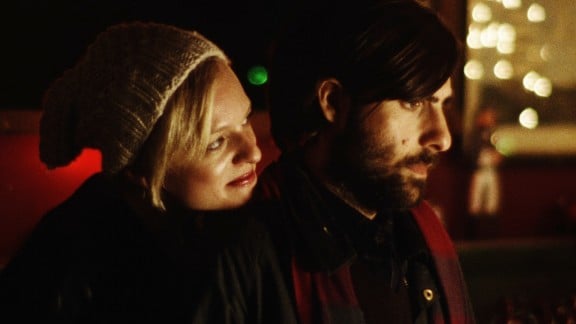 Listen Up Philip was a last-minute addition to my Friday morning schedule, and it was a worthy one. Directed by Alex Ross Perry, the film is a stylized and smart send-up of Films About Very Important Artists and Their Very Important Feeeeeeelings. (AKA Rich White Men Who Think They Have Problems). Through the droll and dry voice of our omniscient narrator, we are introduced to Philip, a constantly livid young author who speaks in formalized turns of phrase and never doubts the center of the universe rests securely between his ears. The jazz score and extreme close-up shooting style add to the tongue-in-cheek tone of the movie, which is really a cautionary tale against being a self-involved, pompous artiste. While Philip is unable to hold onto an honest emotion for more than half a second, the women in his life all have intense cathartic experiences as they attempt (then give up) the struggle to break through to the empty echo-chamber of his self-involved heart. (In one of the funnier moments in the movie, an ex-girlfriend literally run away from Philip after he suggests a kiss.) In the middle of all the satire, Elisabeth Moss gives us a fully developed portrait of Ashley, Philip’s most serious girlfriend, and her triumphant escape from his selfish, quicksand-trap life. Come for the wit and stay for the soul of Moss’s performance. 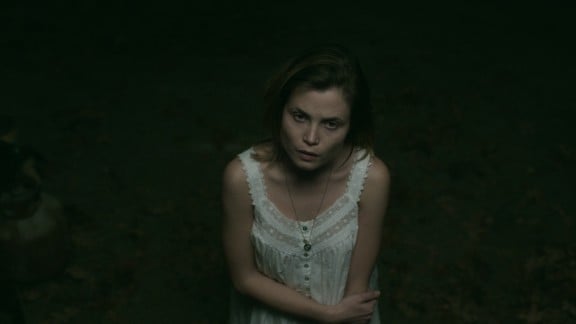 Gitte Witt in Mona Fastvold’s The Sleepwalker. By Zachary Galler.

First-time feature director Mona Fastvold succeeds in establishing an unnerving tone in her psycho-drama The Sleepwalker through ominous sound design and the fact that her birdlike female protagonists flit around in flimsy nightgowns through a home renovation zone for most of the film, and I kept worrying that they were going get either pneumonia or tetanus. Fastvold should be commended for a confident visual style, but the storytelling leaves much to be desired. Kai (Gitte Witt) and Christine (Stephanie Ellis) are half-sisters with plenty of family secrets, which might be the key to unlocking Christine’s erratic and aberrant behavior. Their boyfriends, Andrew (Christopher Abbott) and Ira (Brady Corbet), try to figure out what’s going on along with the audience, during a disturbing weekend spent at the girls’ dead father’s house. But dark doesn’t equal deep, and oblique doesn’t equal artful. The Sleepwalker‘s cast gave the impression of children playing at grown-up roles, and the film immaturely focused on atmosphere above ideas.

If you still plan on seeing this film, read no further.

But I wanted to also mention that the film hits on one of my pet peeves: Using the revelation of childhood trauma as a film’s big twist. Child abuse is an important topic that should be explored intelligently in film, but when used as the climatic turn in a project that is trying too hard to be dark and disturbing, it comes off as both an easy choice and an insensitive one. I have friends who were hurt horribly when they were children. Their stories deserve respect and their courage admiration; they don’t need to see their lives echoed on screen only as an exploitative plot device. 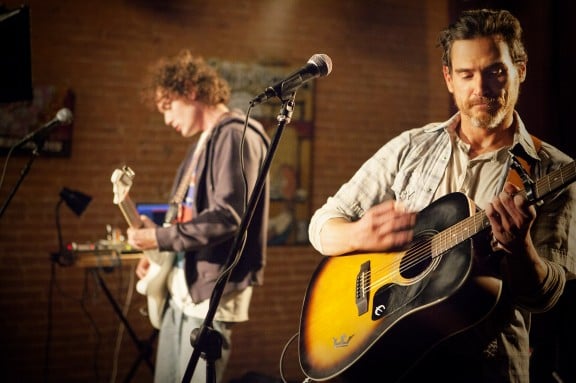 Full disclosure: I worked with Rudderless co-writer Casey Twenter at my day job and have been hearing about this project for years before finally seeing the film. So you may want to balance my perspective with another writer who went in with a little less context than I did. Although I think no matter who you are or how you’re coming into the theater, you’re bound to be moved by William H. Macy’s directorial debut, one way or another. Rudderless follows a father, Sam (an excellent Billy Crudup), grieving his college-aged son’s death. Several years into a booze-fueled slide into isolation, Sam finds his son’s musical journals and demo CDs. Sam’s efforts to connect with his son through these artifacts eventually lead him to a community of musicians (Anton Yelchin, Ben Kweller, Laurence Fishburne and more) who slowly open him up to life again. But with connection comes vulnerability, and Sam has to decide how much to share about his past and the source of his songs.

And those songs? They form the heart of the film. Songwriters Charlton Pettus and Simon Steadman created a catalogue that is believable as a collection written by (an extremely talented) young man and also echoes the emotional chapters of the film. It is a joy to watch Sam and his rag-tag band bring this music to life, and Macy does a fantastic job of crafting musical scenes with momentum and story content built in. The songs feel like a necessary part of the experience, not a side note.

During the film screening’s Q&A, Twenter said he and his writing partner Jeff Robison, were both new fathers when they began working on the script, and their goal was to tell a story about unconditional parental love. And I think that theme is the key to this movie. There are elements of other kinds of stories—social issue dramas, band-on-the-rise narratives—that might raise certain expectations for this film, but Macy sidesteps them neatly. The final scene is beautiful, courageous, unvarnished. And it solidly tells us that this is Sam’s story, Sam’s journey, and Sam’s resolution…no one else’s.

I expect this film to make it to theaters all over the county; put it on your list for 2014.