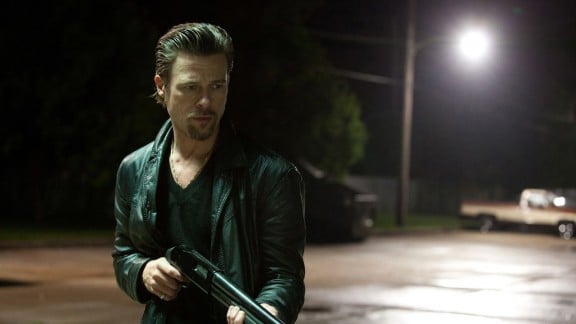 Bad Pitt fans rejoice: this film has nothing to do with Channel No. 5. Based on the trailer, I’d venture to guess that the world of Killing Them Softly smells more like burnt rubber, rain on gas-soaked streets and stale cigarette smoke.

The film is adapted and directed by Andrew Dominik (The Assassination of Jesse James by the Coward Robert Ford) from the book Cogan’s Trade by George V. Higgins. After some rookies rob a mafia card game, enforcer Jackie (Brad Pitt) is hired to bring the local underworld back to status quo. The crime movie has a stellar supporting cast, including Richard Jenkins (I kept wanting to call the tiger in Life of Pi Richard Jenkins, instead of Richard Parker), Ray Liotta, James Gandolfini and Scoot McNairy.

The trailer has some great cinematography by Greig Fraser (Snow White and the Huntsman, Let Me In) that I’m anxious to see on the big screen. And I’m curious to see whether the film proves or disproves the trailer’s ending line, “I live in America, and in America you’re on your own.”

You should go if: You like crime dramas, Pitt and/or driving-in-the-rain scenes.

Early reports: Rotten Tomatoes currently has the film at an 88% fresh rating. Hollywood Reporter critic Todd McCarthy gives us this intriguing description: “A juicy, bloody, grimy and profane crime drama that amply satisfies as a deep-dish genre piece, Killing Them Softly rather insistently also wants to be something more.”