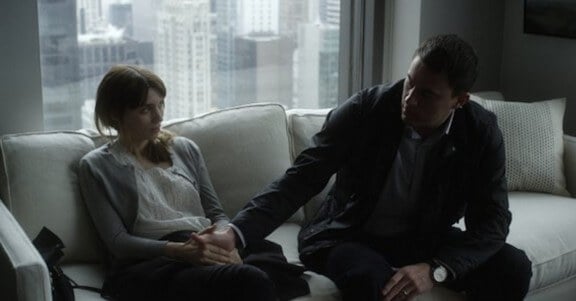 I’m really hoping to get a break from unpacking to go see the film Steven Soderbergh has said will be his last. Soderbergh’s work is always, always interesting, whether he’s going indie arthouse (Che; Sex, Lies and Videotape) or blowing up the box-office with smart takes on popular genres (Oceans 11-13, Erin Brockovich, Magic Mike). (Yes, Magic Mike was a smart film, and a surprisingly moralistic one. It’s a fascinating gender flip on the hooker-with-a-heart-of-gold trope. I’ll write about that some time.) With Side Effects, Soderbergh picked a great team to go out on. The screenplay is written by  previous Soderbergh collaborator Scott Z. Burns (Contagion, The Informant!), and it stars Rooney Mara (The Social Network, The Girl with a Dragon Tattoo), Channing Tatum, Jude Law and Catherine Zeta Jones.

The story is a pharmacological thriller of sorts, focusing on the unforeseen consequences a new prescription drug has on a young woman’s life. The film currently has an 82% fresh rating on Rotten Tomatoes. Peter Travers, for Rolling Stone, writes “Side Effects is a hell of a thriller, twisty, terrific and packed with surprises you don’t see coming.”

Sign me up. And count me sad that there might not be any more Soderbergh opening weekends.

Jason Bateman and Melissa McCarthy star in Identity Thief. Reviews are not good, but the stars are much loved. Comedy buffs may want to risk it, if only to learn what works and what doesn’t. The Oscar films are out in full force, getting in their last viewers before the awards at the end of this month. Read up on ’em on the blog, and then go see Argo, Django Unchained, Zero Dark Thirty, Lincoln, Life of Pi, Beasts of the Southern Wild, Amour, Les Miserables and Silver Lining’s Playbook. Or if you’re in the mood to stay in, peruse my Netflix Streaming queues based on the Oscar-nominated Best Pictures, Best Directors, Best Actors, Best Actresses and Best Screenwriters. Happy watching!

0 comments on “{weekend watch} Side Effects”