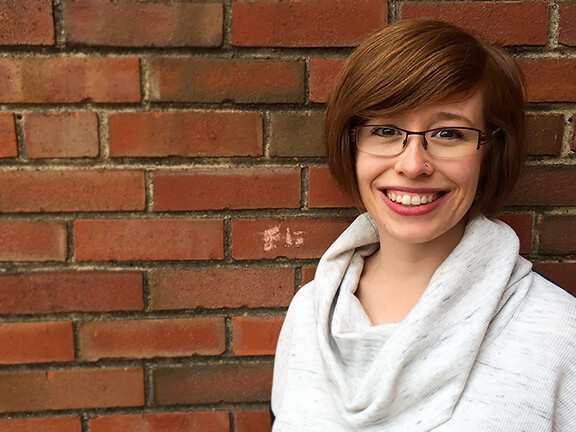 Happy Thanksgiving, everyone!  We’re back today with a new post in our 10 Things I’ve Learned series, and it’s one I have really been looking forward to because it’s from my friend, Amanda.

If I had to go all Barbara Walters on you and name the 10 most fascinating people I know, without a doubt, Amanda would have a spot on that list.  I find her life completely fascinating and inspiring on all sorts of levels.

First off, let just me tell you — this girl is smart.  She was rocking smart back before smart girls were the hit of the web.  But more importantly, she’s the confident and curious and humble and thoughtful and well-rounded kind of smart, which I especially love and respect.  She also has a kick-ass smart job, working for the State Historic Preservation Office at the Kansas Historical Society, servings as a survey coordinator and helping communities identify their historic resources.  Which, in a nutshell basically means that she knows practically all of the buildings in the state, the history behind them, and can offer compelling arguments for why and how they could be preserved.  It’s a topic she’s incredibly passionate and knowledgable about — yes, she’s probably my only friend who will shed a tear over a building — and it amazes me to think about the very tangible legacy that her work is leaving in my home state.  So inspiring.

Amanda is also someone who is fiercely loyal.  As a 6 on the Enenagram, she is someone who sinks deep roots into her relationships.  And whether those be with her family (who she spends lots of time with regularly), her friends (most of whom go way way back), her book club (she was one of our early bird founders), or her coworkers and beyond, Amanda is someone who really models for me what it looks like to stick with people in life and stay true to yourself as relationships grow and change.  We need more Amandas in our world, for this very reason.

Also cool?!?  A few years ago, Amanda courageously followed her dream and moved out of the city and into a cool old farmhouse outside of Lawrence where she is literally surrounded by fields as far as the eye can see.  (Double props to her for courageously doing this as a single girl!)  She also loves to get out of Kansas, and has lived and traveled abroad to all sorts of fascinating places.  She is also a very talented musician and singer and opera-aficionado, and you know, managed to track down Placido Domingo in a performance this past month while she was in Florence like it was no big deal (jealous!).  And I would also like to add that she has an incredibly generous heart, and serves and volunteers regularly all over the place in ways that make a very real difference.

Basically, she’s just pretty great.  And I am so grateful to have a kind-hearted, brave, thoughtful, fun, and awesome friend like her in my life.  So I’m really excited to introduce you to her today, and for her to share with you 10 things that she has learned in life.  I know you’ll enjoy them!

I was a fan of Kansas City before being a fan of Kansas City was cool. I’m not talking about the sports teams. This town is in my blood, and I’m not fighting it anymore. Admitting to my deep hometown pride took years, a few stints not living near KC, and not a few choked-back tears when explaining the history behind Boulevard’s Boss Tom’s Golden Bock. Whenever traveling, the most enjoyable places to me are those with people who accept and celebrate where they live/work/play. I guess I’m just one of those people…only, maybe more annoyingly so. Like the Kevin Bacon Game, I can pretty much connect anyone (and almost anything) to KC: Kevin Bacon & Jami Gertz (Quicksilver), Gertz & Robert Downey, Jr. (Less Than Zero), Downey, Jr. & Robert Altman (Short Cuts); Altman was born in Kansas City. Boom, four degrees.

2. Architecture is an open book.

Perhaps that should say “architecture is a series of open books.” Whatever. The point is that the ways buildings were designed and constructed offer vast amounts of information about how people (or a single person) lived at a given time. It’s true for historic buildings as much as it’s true of today’s creations (look how airports are designed today versus 30 years ago). Buildings, like books, are one of the most tangible connections we have to past generations of living, breathing, even fallible, people. By studying architecture, we better understand our personal, as well as collective, histories. Think about this the next time you’re sitting in your cubicle: perhaps 50 years from now, some historian will study your office building for hints of what life was really like in 2014. Go ahead and hide your coworker’s iPad under a floor board with an explanatory note. That future historian will thank you when she finds it.

3. Never devour a fresh pineapple in one sitting.

I tried this once. Not on a dare but because pineapple is one of my favorite foods, and I thought, “Hey! Pineapple for dinner!” The pain finally put an end to my efforts about halfway through. If you enjoy feeling like you just chewed some Exacto blades (sans the blood), have at it, but you’ve been warned.

Dramatic statement aside, this has become one of my mantras. There are things—both good and bad—that could or could not happen to me that really are outside of my control (insert shocked-face emoticon here). No amount of planning on my part will prevent a plane from falling out of the sky with me on board (like you haven’t had that thought at least once), just as no amount of wishful thinking will cause that one guy to ask me out for a beer, just as no amount of education will prevent a determined owner from demolishing his historic building. There is only so much I can do, which is both frustrating and freeing, so I get on the plane; I shrug my shoulders at the guy; and I mourn the building. Life goes on…or it won’t.

5. Nature is good for the soul.

I’ve always enjoyed being outside, but moving to the country awakened me to how much I need all the intangible goodness of the out-of-doors. On those crisp fall nights when the windows are still open, awaking to howling coyotes is exponentially more delightful than awaking to howling drunken college kids. A good contemplative hike through the woods after a stressful day is rewarded by a staring contest with a doe and her fawn (I always let them win). Sitting on the porch swing on warmer mornings offers a great seat to what I like to call Competitive Hummingbird Feeding. And the thunderstorms! They’re just more awe-inspiring when the thunder has space to stretch. My heart rejoices in being able to partake in even the smallest bit of nature’s wonder, and I’ve learned that few other things cheer me as much just observing creation.

6. The true benefits of chiggers have yet to be determined.

Okay, I know that’s more a hope than something I’ve learned, but you guys, there are some fascinating discoveries being made related to some less-than-charming creatures (read this article and be amazed). Venom from all kinds of animals is linked to numerous medicinal treatments, and hookworms are touted to reduce severe allergies. These scientific revelations bring me great hope. We live in an imperfect world that I believe God is in the process of redeeming through the acts of on-going creation. The natural world holds undiscovered weapons to help us fight back against pain and disease, and we are given the opportunity to discover them. What is utterly marvelous is that hope shows up in the most scary and unlikely places, as if what evolved into a deadly organism (e.g., a scorpion) is being redeemed into something beneficial. Until chiggers are redeemed, however, feel free to remind me next summer of this hope when I’m suffering from Chiggerpox (that time when I forget to use bug spray and end up looking like I have smallpox).

7. Too much introspection feeds anxiety.

Do you realize that we think about ourselves way more than anyone else does? Chances are high that no one is going around with endless feedback loops of all the awkward things we’ve said or done (and if they are, that is downright creepy). I have learned that the biggest part of my anxiety is constant negative introspection. The fact is that when I fixate on the things I could have said or done differently, I intensify my anxiety by a) not being able to undo my failings and b) thinking that others are as fixated on my mistakes as I am (they’re not). I’ve had to learn that the best way to stop abusing myself is to take that energy and focus on anything other than myself. The less time I spend being intimate with my failures, the more available I am to my friends, family, and community.

I actually find it slightly depressing that this is something we have to relearn. As kids, we have no filters, which is why some of the most hilarious stories are of children’s brutal honesty. As adults, it’s like we swing to the opposite side of the spectrum, often tempering our opinion based on how we want to be perceived. This annoys me greatly because it is so exasperating to ask a question only to get the “Oh, I don’t care” answer and find out months later that I didn’t pick the right option. If I have an opinion or something weighing on my mind, I make every effort to clearly communicate it in the kindest way possible (I still need help learning that last part). Sometimes, though, I really do want to let you pick the movie, as long as it’s not that one. Or that one.

9. Get fitted when purchasing new brassieres.

Though certainly something you never want to do, ladies, it will change your life to have appropriately fitting undergarments; ‘nough said.

Ever get food envy? You order dinner only to regret the decision as soon as you see what someone else ordered, knowing you should have gotten that. Though edible, yours just isn’t what you wanted. I really despise that feeling, especially when I know I’m making a hasty decision about important matters (not that food isn’t important). Many times I’m more certain of what I don’t want than what I do, but I’ve learned to just be patient until I discover what it is I’m seeking. I don’t always have this luxury, but when I do, it makes all the difference in the world because I’ve held my ground. There is a level of self-confidence and peace that comes from not accepting the second or third best.