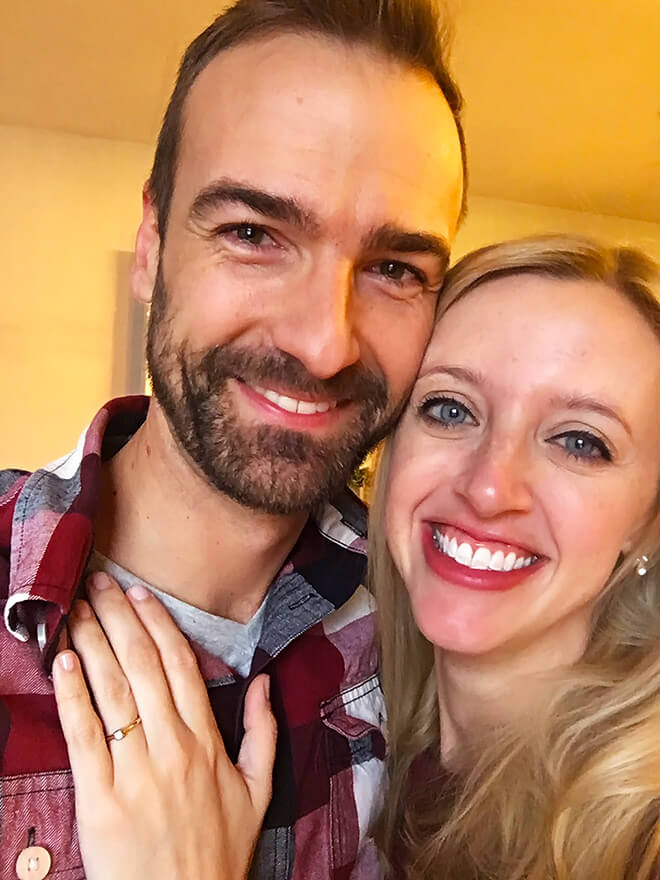 Oh my goodness, I’m not even a sentence into this post and already — especially seeing this picture again for the hundredth time — the happiest tears have sprung back to my eyes.  Because it’s still sinking in that a week ago, the most extraordinary man I’ve ever met got down on one knee and took my hand and asked me to spend the rest of my life with him.

And then afterwards, let’s be real — I totally lost it.  ?  Because I felt like I had been ready and waiting for this moment for years and years.  But even in my wildest, most hopeful dreams — especially during those long seasons of waiting, hoping, believing it might be possible to meet someone amazing — gosh, I just never imagined that it could actually be this good.  That he could be this good.  That the reality of life together as “us” could be this good.

But it truly is.  It’s so good.  And my heart could not feel more peaceful and thankful and joyful and just…full. 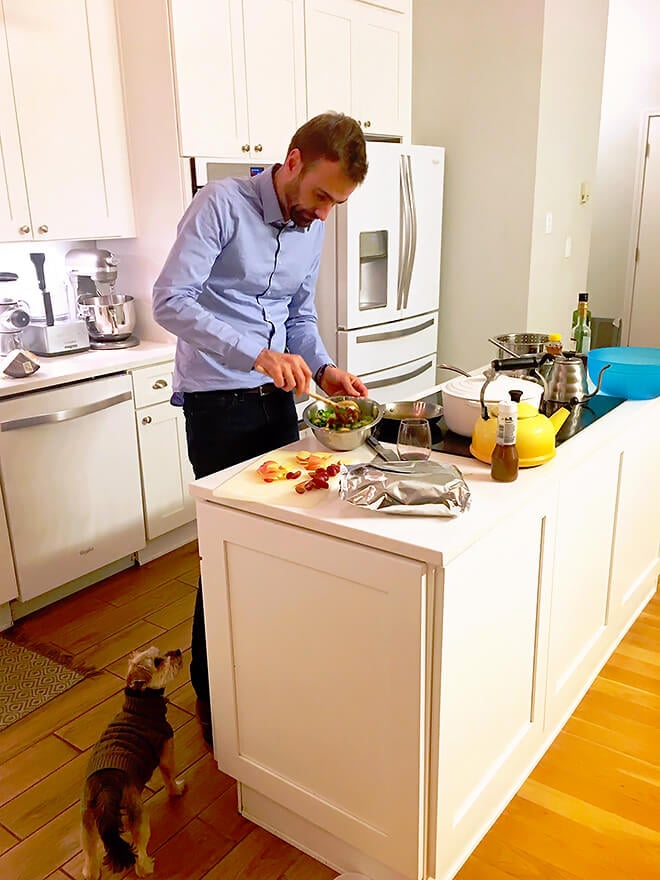 And for those of you (like me!) who always want to hear all the details of a proposal, I thought I’d pop in today and share the full story.  ?

Actually, many of you who follow me on Instagram already caught the first part of the story last Thursday night.  (And a few of you even guessed the ending before I did!)

The whole night began when Barclay mentioned that he wanted to cook me dinner on Thursday night as a thank you for being supportive during his ultra-busy month of shows with his Christmas band, which was wrapping up their final gig the day beforehand.  Seemed reasonable to me.  ?  Plus, I always love our date nights “in”, and was just excited that he had a free evening again.

Sure enough, he showed up promptly at 5pm, mentioning that his aim was to have dinner on the table for us by 5:30pm (<– which he knows is my dream, because I’m an 80-year-old early-bird-dinner-lover at heart, and love eating the second I’m done with work.)  But I admit that I was a bit amused to see him walk in the door with an enormous box of groceries…for just the two of us.  This was not entirely surprising, since Barclay doesn’t keep an “extensively-stocked” kitchen, and literally does 100% of his grocery shopping at Costco.  ?  But still, it was a noticeable step up from his usual chopped-salad-in-a-bag specialty.

Still, though, any momentary suspicions were relieved when he announced that the theme of the date night was “a winter picnic” (<– which was super-cute, being that we are always talking this time of year about how we miss our summertime picnic dates).  I offered to be his sous-chef, but he poured me a glass of my favorite wine and insisted that he just wanted me to relax and hang out and let him do all of the cooking.  So I plopped down at the kitchen island and we turned on some Christmas music and caught up on our day while he cooked.

I was assuming the meal would be like every other meal we usually cook together — just a main course and salad, with maybe a cheese plate before or after (<– Barc’s specialty).

But after he served the third course, and it looked like there was more to come, I figured I had better document this absolute feast that he was preparing.  And I was glad I did, because it kept coming and coming!  (Ha, so much so that I regretted filling up on that big cheese plate at the very start.  Whoops.)   Here are the photos that many of you saw on Instagram — six courses!  Each one was absolutely delicious, and had some special meaning to the two of us.  For example, the ginger salad was his take on our favorite salad we each order before sushi each Monday night, we make a cheese plate together for a snack probably weekly, he knew that roasted asparagus was one of our favorite veggies, and bacon — well, he knew my love of bacon.

It was all incredible.  And oh my goodness, by the end of it I was so full.  ? 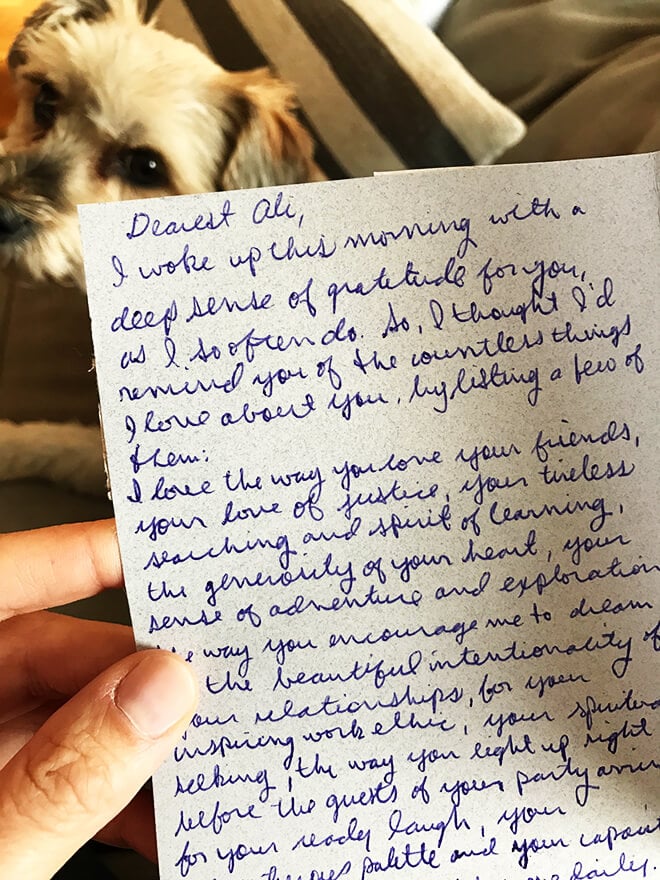 Then, as we were finishing up the final course together, Barclay mentioned that he had written me a card, which instantly made me smile.

You see, last Christmas, he and I had discussed before the holiday that neither of us are big “gifts” people and were more into investing in shared experiences together.  So we agreed to pass on buying each other Christmas presents.  But, I had asked him if he would write me a card for Christmas instead.  And he did.  And I wrote him one.  And it was perfect.  :)

Anyway, when he pulled out the card, I figured that was him being thoughtful again and continuing our little tradition.  And the card was absolutely beautiful.  But I will say…my little antennae did go up for the first time when I noticed that he was following my eyes on the page super-intently when I neared the end of the card.  And once he saw that I had reached the end and read the final line…”I love you so much, and choose you with all of my heart”…

…he instantly dropped down on one knee beside me.

…and pulled a ring out of his pocket and asked me to marry him. 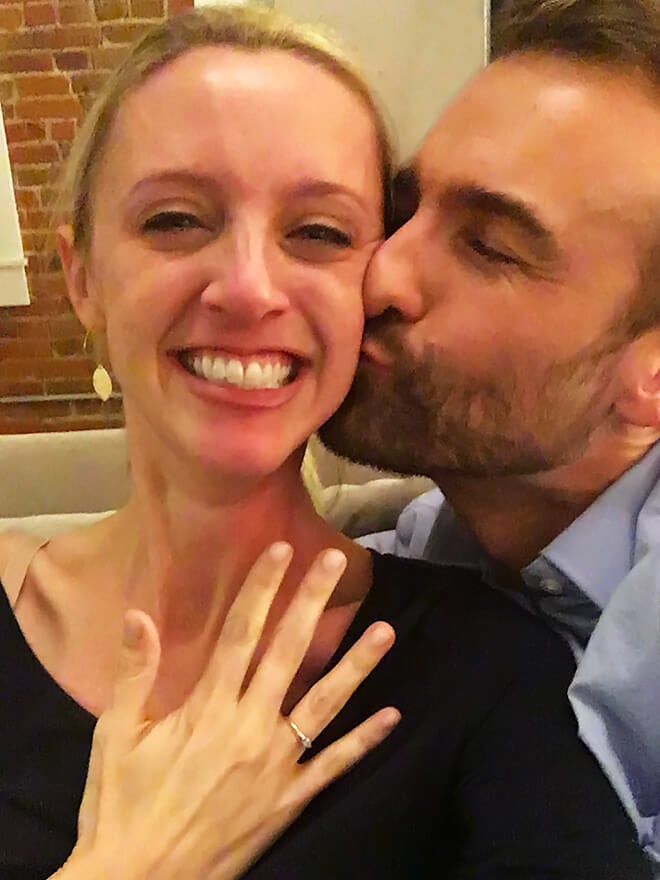 …and I freaked out.

And it was amazing.

We probably sat there on the couch for at least 20 minutes just freaking out about the-rest-of-our-life-ness together. 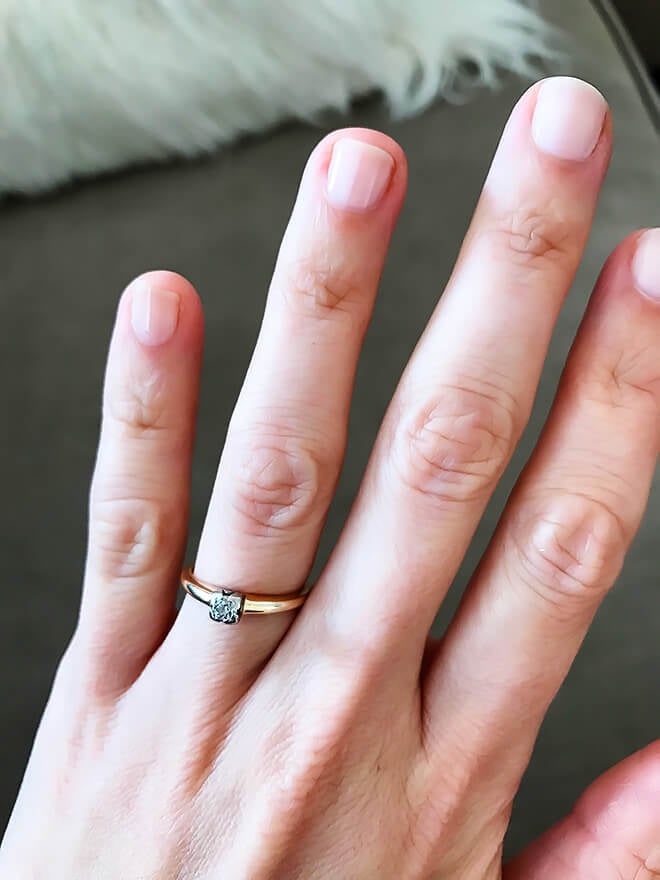 Oh, and then I finally got around to asking him how got ahold of this!

The ring is was actually 102 years old, and was my Great Grandma Allie’s engagement ring that I inherited years ago.  It’s tiny and simple and beautiful and perfect and I had dreamed of wearing it someday.  But it was at my parents’ house in Wichita.  And — yeah, yeah, I will admit — I had been keeping a wee bit of an eye on Barclay the last few times we were in Wichita to see if he might have slipped away for a bit with them to ask their blessing and get the ring.  But he hadn’t!  (And I was starting to get a little impatient about that not having happened…)  ?

Well, turns out that while I was in Korea last month, Barclay went above and beyond to make that meaningful as well.  On the day after this enormous event that he helped coordinate at his work (like, imagine weeks of overtime leading up to this thing, and exhausting long workday the day-of), he woke up early on a Sunday and made the 6-hour round-trip drive to Wichita to spend the day hanging out with my parents…and then of course, asked for their blessing and picked up the ring.

Finding this out, of course, prompted another round of happy tears.

Anyway, by this point in the night, I was still a sobby, smily mess.  But Barclay told me that he had one more “tiny little dream” for us that night — he wanted to know if I’d go back to El Pueblito (where we had our 7-hour first date) and share a margarita to celebrate together.  I couldn’t imagine a better idea, so I grabbed some Kleenex and my furry coat, and we immediately hopped in the car and drove over. 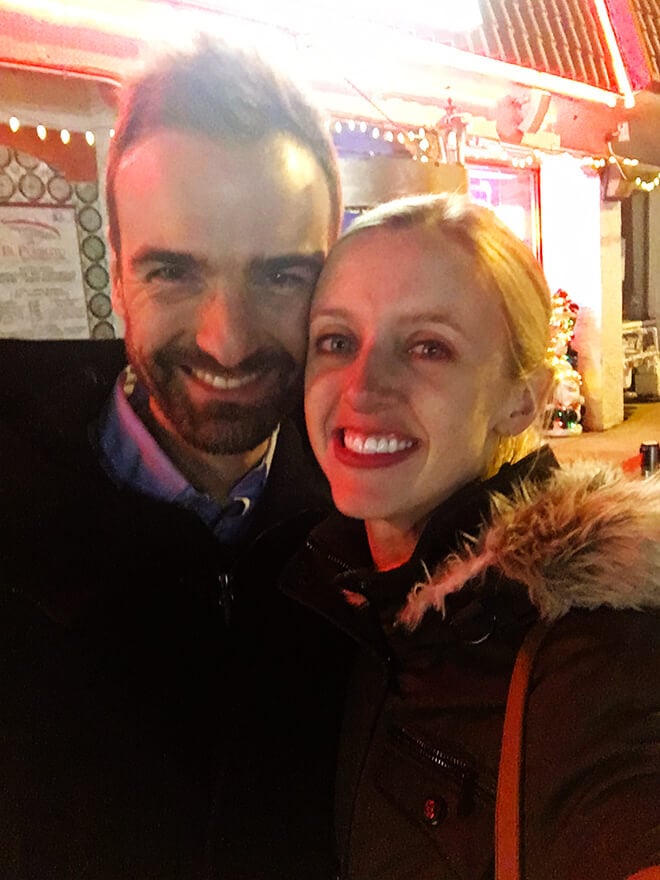 As we were pulling up, the reality of all of this was beginning to sink in more and I asked him how on earth we were going to tell our friends.  But we agreed to just soak it all up with just the two of us for awhile, and then maybe call some family and friends after our margarita.  Well, turns out…

…this amazing surprise was waiting for us.

Tons of our dearest friends were all there at the restaurant waiting for us, and greeted us as we walked in the door with a huge cheer and lots of hugs and two big margaritas for the future bride and groom.  And I was 100% surprised.  (I mean seriously, I’m good at sniffing out surprises, but I think I was in such a deliriously happy haze that this one hadn’t even occurred to me!!) 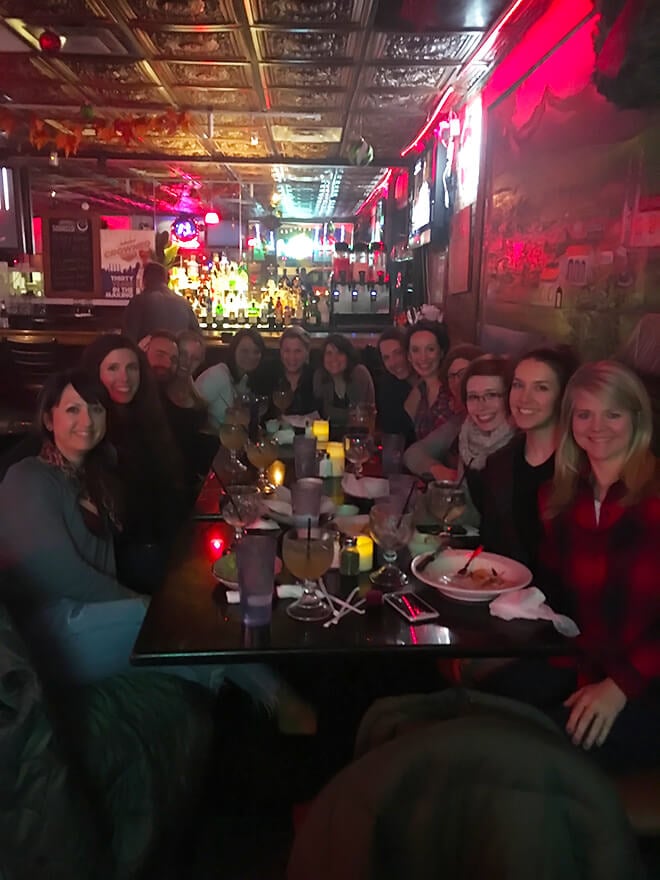 As it turns out, Barclay had arranged the whole thing with them and the restaurant owner (who told us we should get married on our first date) beforehand.  And throughout dinner, he had been texting them periodically to tell them when to show up.  Apparently he had been a little anxious because we were running behind schedule during dinner — which I then delayed with All The Tears after he proposed — but it all ended up working out perfectly. 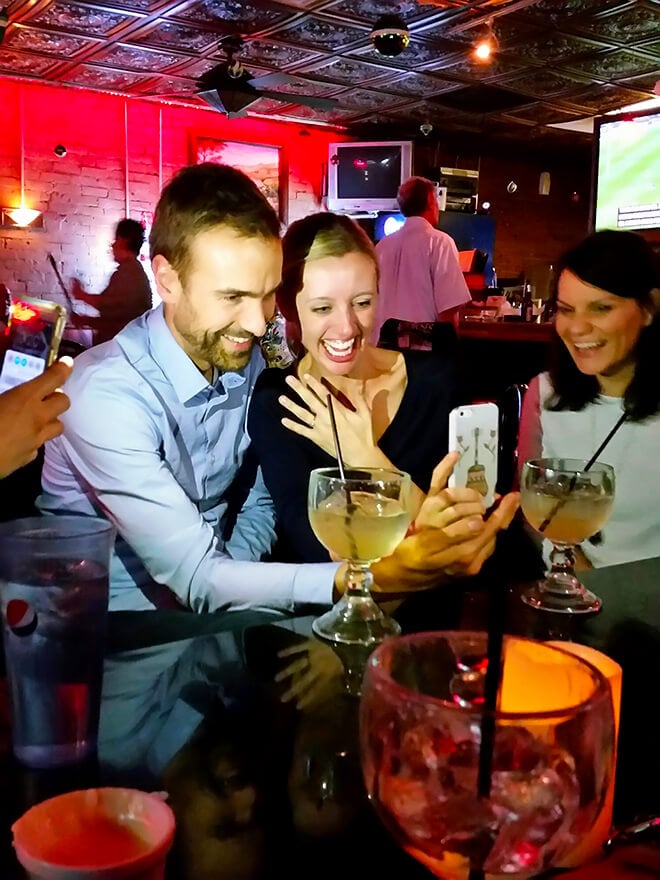 When we arrived, everyone instantly asked us if we had called our parents yet to tell them the big news, and we mentioned that we were thinking of doing so afterwards.  But they insisted we do it soon, so we Facetimed my parents and shouted out to them that “WE’RE ENGAGED”!  They cheered on the other end, and we cheered, and everyone smiled and cheered.  Ha, but unfortunately it was so dark and the music was so loud in there that we couldn’t hear much else, so we decided to catch up later and called Barclay’s parents as soon as we left the restaurant and could hear again.  Which we did, and the smiles continued.

Well, turns out that the other best part about him proposing three days before Christmas was that we were able to spend the entire holiday continuing the celebration with friends and family….including our two other dear friends, Erin and Jeff (the two on the right), who also got engaged the same week.  So fun!  (Also, those are two of our matchmakers there in the middle, Lindsay and Will, whom we will always have to thank for bringing us together.)  So much love to be thankful for this Christmas.

Anyway, the whole thing felt magical, and meaningful, and exciting, and fun, and so like us.  And it made me so thankful for the millionth time for this incredibly thoughtful man who I now get to marry.  And much more importantly, spend the rest of my life with, which just feels like the wildest and best thing ever.

I love him with my whole heart.  And he loves me with his.

And not a day goes by that I’m not thankful for the incredible gift that this all is.

And, as always, not a day goes by that I’m not thankful for the incredible gift that all of you are.

So from the bottom of my heart, thank you for all of your sweet encouragement and support over the years leading up to this point.  Barc has been asking this week when I’m going to share the good news with my readers, and I’ve been offline ever since last week taking some time off and soaking up time with friends and family in town around the holidays.  But I feel like this is the post that I’ve been dreaming about writing for literally years and years now.  So thank you from the bottom of my heart for reading along, and I promise to keep you posted on plans ahead! ?

#ThrowbackThursday picture of the two of us on our very first date at El Pueblito last year. I knew then that I’d found a keeper. :)