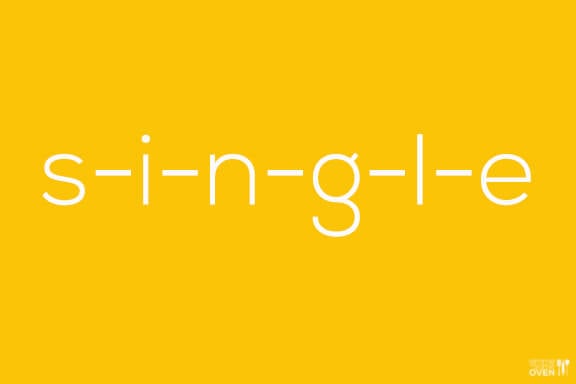 First of all, I want to say a huge thank you to everyone who read my 30 and Single post.  I had NO idea that so many people would be interested in tuning in (and chiming in) on the topic.  Nor did I honestly consider the possibility that you all would respond with such thoughtful comments, emails, tweets, texts, etc.  I’m totally humbled and grateful, still a little freaked out about it all, but I definitely look forward to hearing more about what you may have to say.  So thanks for making this a conversation!

Ok, back to the topic at hand…

I have to admit that there’s something about hearing/talking/writing/reading about the topic of singleness this past week that has felt really odd to me.  Sure — awkward, vulnerable, a little uncomfortable — I knew that was to be expected.  But I couldn’t quite put my finger on what felt so strange and out of the norm for me until a friend pointed it out.

I quite simply don’t say the word “single” all that much!

First of all, I pretty much never use the word as a noun.  (Hi, I’m Ali, and I’m a single!!)  Mmm, yeah I’ll let Kraft cheese and awkward church mixers keep the copyright on that one.

But even when used as an adjective, the word “single” is not one of the first words that I use to describe myself.  Friend/daughter/sister/neighbor?  Of course.  Food blogger/photographer/entrepreneur?  Definitely.  Traveler/book-clubber/musician/dog-owner/egg-drop-soup-lover/obsessive-Parenthood-watcher/pour-over-coffee-drinker/Jacobs-Weller/mayonaisse-hater/ballet-dancer/proud-KC-dweller?  You’d better believe it!!

Outside of tax forms, that weird little descriptor on my Facebook profile, and placing an order for one pump of sweetener in coffee at Starbucks, I just don’t find myself having the occasion to identify myself with the word “single” all that much.

I think it’s mostly because being “single” is simply not the main topic of conversation amongst my friends.  Actually, when I think of it, the topic of singleness only comes up occasionally — when one of the single friends in our crew is having a really empowering or rough day with being single, when relationships begin or end, when we’re at weddings or showers, or — you know — when one of the girls in the group writes a very public blog post about being 30 and Single.  ;)

Sure, I’ve had my years in the past with various friends and groups when the topic came up all the time.  But nowadays, being single just seems to be the context for how I and my single friends are living (and enjoying) our lives.  And since most of us are in our thirties and it’s been that way for awhile, we honestly usually have more exciting things to talk about!

But that said, I think I’ve often been reluctant to say and embrace the word “single” because the word has been given a bad rap over the years.

Don’t get me wrong — I’ve heard it used in tons of positive ways.  Or even better, just neutral, NBD, non-dramatic ways.  (“Oh you’re single? Cool.”)  But I still feel like there’s usually a more negative than positive connotation to the word when it is said in American society, which takes many shapes and forms, both spoken and unspoken.

As I was typing these out, though, I thought it would be interesting to go back to the dictionary and look up what the actual definition of “single” has to say.  So since I long ago gave away my dictionary, I turned to the almighty Google, and couldn’t believe what I found:

As G.O.B Bluth would so aptly put it…

Talk about defining something by what it is not.  Look at how many times they use the prefix “un-“, or the suffix “-less”.  And how they frame a person’s options as being single, married, or in a “stable sexual relationship”?   Or my favorite — a spinster?!   Gah, I could write a whole blog post on this one, but I’ll spare you (for now).  Bottom line…

Google — and everyone else — I think we can do better.

And I think we need to.

So here’s my proposition.

Instead of shying away from the word “single”, I think we need to do the opposite and reclaim it for good.

Instead of using the word “single” to describe the occasional hard moments (sad, bitter, jaded, depressed, wistful, selfish, etc.), use the word single to realistically describe the many normal everyday moments (confident, happy, strong, content, empowered, optimistic, capable, grateful, etc.).  Any of my married friends have tons of those moments in their days and in their marriages, and I imagine would want the word “married” to connote these as well.

Instead of using the word “single” to describe a passive, reactive time of waiting for life and marriage to begin, use the word single to recognize that it is a proactive choice.  Some of my friends are choosing to be single for their entire lives.  But even my friends who hope to be married would tell you in a heartbeat that they view their current relationship status as a choice.  Given the options they have, they are choosing to be single, rather than spending their lives dating or married to someone who is not the best fit.  Just like my married friends are choosing to be married to someone who does seem like a great fit.  Both choices are proactive and respectable.

Most of all, instead of using the word “single” to describe what is not, use it to celebrate what is.

Ok, I’m totally that girl who loves to leave meetings with action steps.  So feel free to take or leave this last part.

But one thing I would offer and encourage us all to consider is how we respond to hearing the word “single” in the next few months.

If you are single, how do you physically and mentally respond when you say the word about yourself?  I know that for years when someone would ask if I was dating or married, I would kind of sheepishly shrug my shoulders and plaster on a wistful smile and say something to the effect of, “Oh, I’m still single…”  And then dread the awkward cliches or assurances that so often came.  I now marvel at why this seemed like a good response at the time, but I think the people-pleasing side of me worried that people might be turned off by an overly-confident single woman.  So meekness seemed safer.

But recently, I’ve decided that is (a) ridiculous, (b) adding to the woe-is-me single stereotype, and (c) totally not reflective of reality!  So I’m trying to re-train myself to develop a default response that is much more true.  When someone asks the question, I want to be be able to genuinely smile and say, “Actually, I’m single!”  I don’t want to go overboard and be overly confident, but I do want to hold my head high and say that yes, I’m totally single and really love my life right now and am damn proud of all I’ve accomplished on my own. I may still hope to be married someday, but for now, my life is filled with plenty of cool things!

If you are not single, how do you physically and mentally respond when you hear others say the word about themselves?  Is it different than how you respond to people who say that they are married?

I’m going to do two posts soon offering some thoughts that I have been gathering on what to say, and what not to say to single people.  But my basic advice is this: just be sensitive, and don’t feel the need to default to sympathy.  If someone tells you they are single and are feeling great about it, by all means, cheer them on!  If they’re having a rough time, listen and remind them of why you love them.  But regardless, when someone says that they are single, I think the best thing you can do is to physically and verbally respond with respect and love.  (Isn’t this how we hope to treat one another anyway?)  And if you do want to encourage, give props to the single life that they are currently living, rather than giving assurances that their fairytale ending is just around the corner.

I want to note that I recognize I am incredibly lucky to be living as a single woman in the United States in the year 2013.  Many living in other countries around the world, or in different generations throughout history, have not been given nearly the freedoms and resources and credit that we single people get to enjoy today.  So this whole conversation comes with a grateful, perspective-aware grain of salt.

But that said, I do think that there’s always room for improvement.

So Google, I love you, but there’s WAY more exciting ways to rock out the word “single”.  :)

In your own life, what are the ways that you feel like the word “single” has been defined (for better and/or worse).  And how would you possibly like to see it redefined?