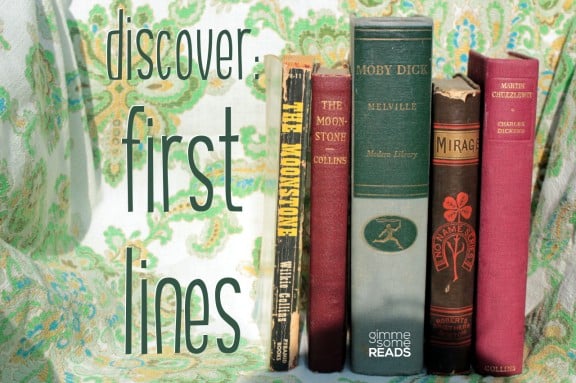 We are officially halfway through the alphabet! And, in case you missed it, you can win a sweet First Lines mug as part of A Literary Education Giveaway.

This week I pulled four M books from my shelves. As I’ve only read one of the four, I was especially curious which first line would grab me.

1. The Moonstone by Wilkie Collins (originally published in 1868)

I address these lines — written in India — to my relatives in England.
[Prologue]

In the first part of Robinson Crusoe, at page one hundred and twenty-nine, you will find it thus written: “Now I saw, though too late, the Folly of beginning a Work before we count the Cost, and before we judge rightly of our own Strength to go through with it.”
[Chapter 1] 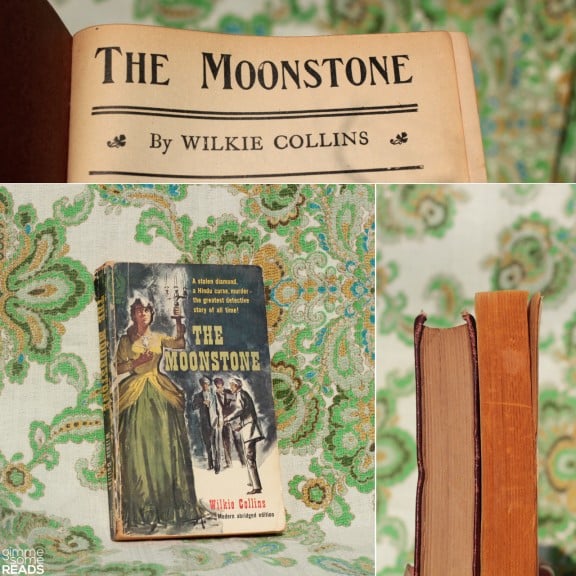 This is the one I’ve read; and yes, have multiple copies of — but the paperback is abridged. And though they look to be about the same thickness, don’t be fooled (as I was) — apparently the real deal has super thin pages because it’s 512 pages, while the abridged version is only 286 pages.

I was first introduced to Collins’s The Woman in White, which is noted as one of the first mystery novels; and later read The Moonstone which is considered to be the first detective novel in the English language. Who know if Sherlock Holmes would’ve been born in Sir Arthur Conan Doyle’s imagination without the creative genius of Wilkie Collins’s trailblazing books? Can you imagine?

The mystery isn’t the most complex or suspenseful you’ve ever read, but knowing that it’s the first of its kind definitely adds to its fascination. I found it to be an easy and interesting read. There’s also a decent film version, starring Greg Wise and Keeley Hawes. 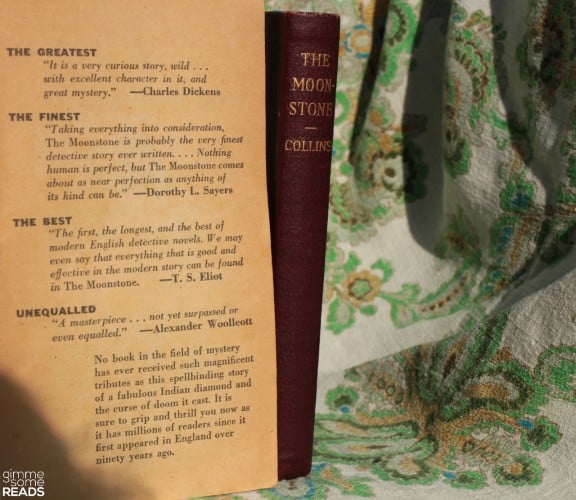 When I opened the paperback to find a flyleaf full of praise from the likes of Charles Dickens, Dorothy L. Sayers, and T.S. Eliot, I almost squealed. Can you imagine having T.S. Eliot and Charles Dickens of all people singing your praises? 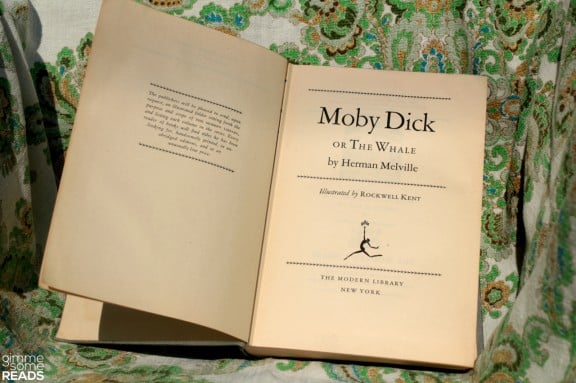 I’ve heard this first line numerous times, but I’ve always been daunted by this book. Probably because it’s over 800 pages and I’d never heard anyone say they enjoyed reading it. But recently I’ve been told it’s worth reading, and that plus the fact that it is a classic after all, and maybe a teensy bit because the Cozy Classics version made me smile, have made me consider moving this up the never-ending reading list.

By the way, does anyone else ever feel like your reading list is similar to your Netflix queue — 100s of titles and you don’t know how you’ll ever get through them all…especially when you keep going back to the ones you’ve already read/watched? *sigh*

3. Mirage by the Author of Kismet (originally published in 1878) 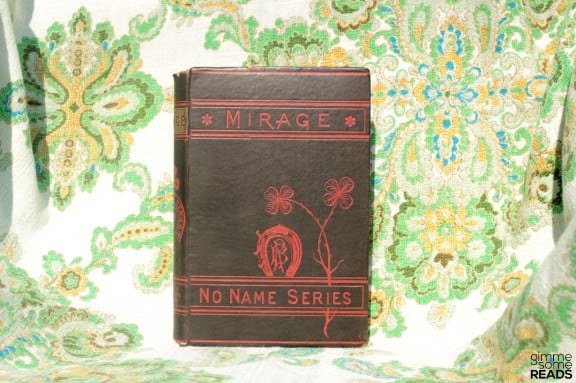 Mirage from the No Name Series | © 1884 Roberts Brothers

Did anyone else immediately think: Bond — James Bond?

This book was purchased purely for its looks. Plus, I was intrigued by the “No Name Series.” Of course, no one can leave anonymity alone and so apparently this book was written by Julia Constance Fletcher who went under the pseudonym of George Fleming. She traveled with Oscar Wilde in Italy when they were both younger and supposedly her main characters in this book are based on Wilde and herself. Interesting.

As no lady or gentleman, with any claims to polite breeding, can possibly sympathise with the Chuzzlewit family without being first assured of the extreme antiquity of the race, it is a great satisfaction to know that it undoubtedly descended in a direct line from Adam and Eve; and was, in the very earliest times, closely connected with the agricultural interest. 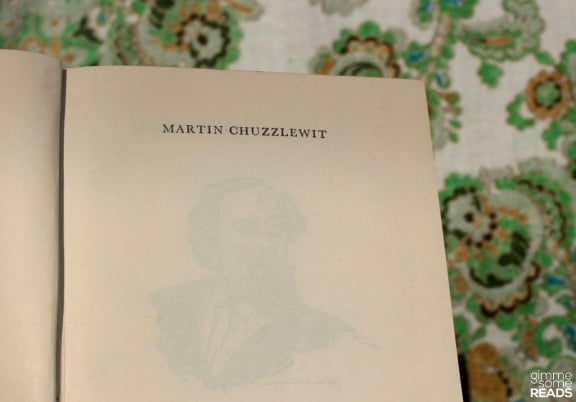 Apparently I need to get cracking on reading more Dickens. This guy is funny. Even his character names are great — Chuzzlewit?

So, though I liked The Moonstone as a story, and even think the first line of Chapter 1 is pretty intriguing; and though the first line of Martin Chuzzlewit definitely made me smile; I was surprised to find that the one that drew me to keep reading was Moby Dick.

Part of it was this great copy I have, which looks totally plain from the outside, but has these wonderful illustrations before each chapter. I’m a sucker for black and white illustrations.

Plus, Melville’s humble dedication to a fellow writer of his time, endeared him to me — somehow made him seem more human:

And, as I learned from the second American Literary Timeline poster (also part of A Literary Education Giveaway!), they often both published books in the same year. But while Hawthorne was already well known, Melville was up-and-coming. Apparently it was while he was working on Moby Dick that he actually met Hawthorne — and was inspired to finish his whale story.

But for all that, when I read the first line, I simply didn’t stop at the period. And before I knew it, I had read the first page and found myself smiling. There’s even a hint of Dickens-esque sarcasm in the opening lines. 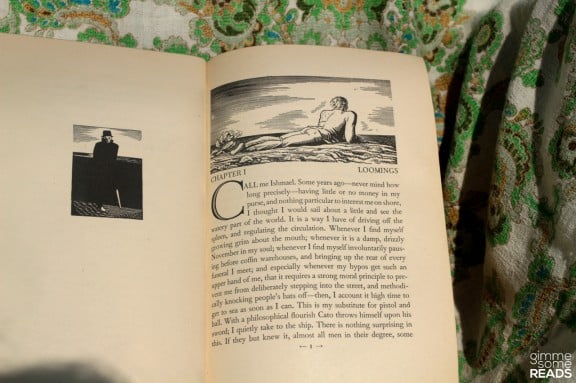 Call me Ishmael. Some years ago — never mind how long precisely — having little or no money in my purse, and nothing particular to interest me on shore, I thought I would sail about a little and see the watery part of the world. It is a way I have of driving off the spleen, and regulating the circulation. Whenever I find myself growing grim about the mouth; whenever it is a damp, drizzly November in my soul; whenever I find myself involuntarily pausing before coffin warehouses, and bringing up the rear of every funeral I meet; and especially whenever my hypos get such an upper hand of me, that it requires a strong moral principle to prevent me from deliberately stepping into the street, and methodically knocking people’s hats off — then, I account it high time to get to sea as soon as I can. This is my substitute for pistol and ball. With a philosophical flourish Cato throws himself upon his sword; I quietly take to the ship.

Whether because of the “damp, drizzly November in my soul” line or the thought of someone “methodically knocking people’s hats off” in the street — I might just end up reading this sooner than I think.

What was your favourite first line
among your own four M books?
Any thoughts on Moby Dick?