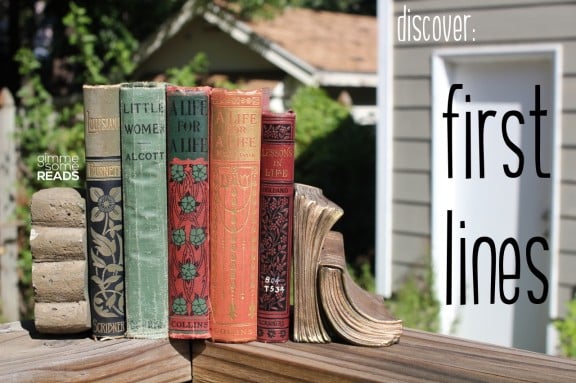 This week definitely boasts the oldest (all published over 99 years ago!) and prettiest set of four books in the {Discover: First Lines} series. And yes, there is indeed another two-copy title. When I come across a good book cover, I can’t help myself.

I’m actually still on the lookout for a specific edition of A Life for a Life, so if you ever come across this version: 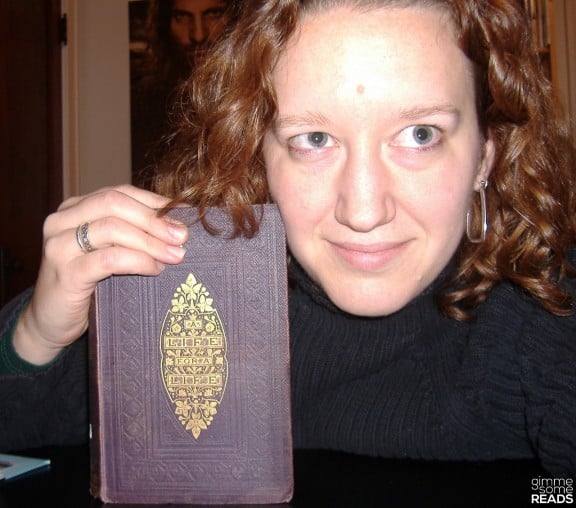 My first introduction to A Life for a Life back in 2006.

And yes, if you look closely at the above picture, you can see Aragorn peering over my shoulder. I love that Lord of the Rings poster.

Olivia Ferrol leaned back in her chair, her hands folded upon her lap. 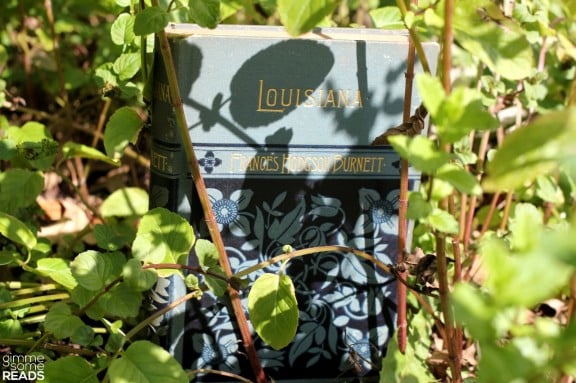 I got this book purely for its cover — and the fact that I lived in Louisiana for nine months as a child. This was the first time I cracked it open, and the first time I made the connection that it’s by the same author who wrote A Little Princess and The Secret Garden. Though this first line doesn’t particularly intrigue me, I would be curious to read one of her lesser known novels to see how it compares to the old favourites.

“Christmas won’t be Christmas without any presents,” grumbled Jo,
lying on the rug. 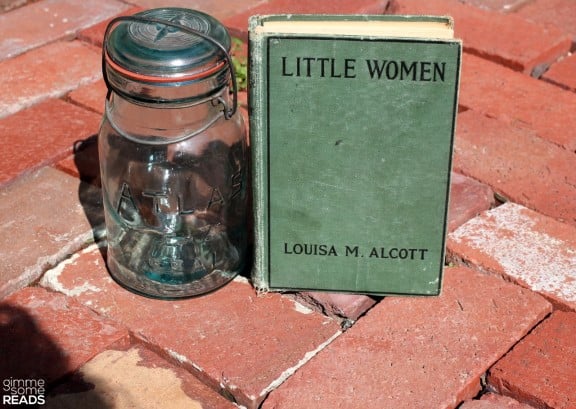 Oh, Jo. Such a great character. I love how you can see her so immediately right from the first line. I remember briefly as a child being concerned for my future because my name was Beth (don’t worry, I won’t say any more than that, in case you happen to not know this story); but it was Jo who I resonated with. And, like many girls, I couldn’t stand the fact that she didn’t end up with Laurie (especially in the film, when that also meant she was turning down Christian Bale — I actually used to stop watching the movie after that part). Wonder how I’d feel about Jo’s choices reading it at this point in my life.

This particular copy was my grandmother’s book, which my aunt passed on to me several years ago.

The Film: With all the multiple remakes of Jane Austen novels, I’m surprised that there hasn’t been a newer version of this one in the past almost twenty(!) years. If you’ve never seen the (1994) film, you definitely should remedy that. I’ve also seen the 1949 version with Elizabeth Taylor and Peter Lawford, which I vaguely remember; and apparently there’s a 1933 version with Katherine Hepburn.

3. A Life for a Life by Dinah Marie Craik (originally published 1859) 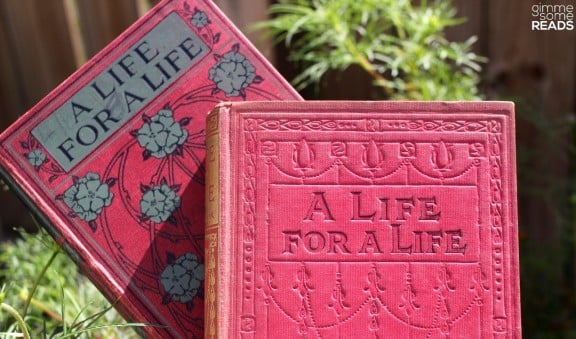 I won’t go into my whole story about this novel here, because it’s worth its own blog post. But, suffice it to say that I stumbled upon this story because of a mislabeled quote. It’s a hard book to track down, but I eventually got a copy through interlibrary loan — a beautifully engraved, hardback copy from 1860 (as pictured at the beginning of this post)!

This is probably one of the best “book surprises” in my reading experience. I didn’t know anything about the plot or characters, and I’d never heard of Craik as an author, or any of her other writings. I was curious, but didn’t expect much beyond a decent read. It’s now been seven years since I read it, so I can’t remember the details, but I do remember feeling like my world shifted as I read this book.

The writing is more in the style of Anne Brontë, so it’s definitely slower-paced, but Craik has an insight into people and a way with words, and there are quite a few quotable passages.

It rained yesterday; and, though it is midsummer, it is unpleasantly cool to-day. 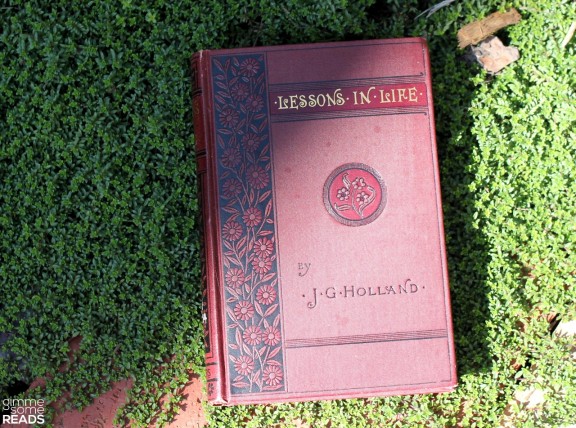 The opening quote of Lesson 1 is from Wordsworth; it’s a bit more intriguing:

That blessed mood
In which the burden of the mystery,
In which the heavy and the weary weight
Of all this unintelligible world
Is lightened.

Another book I got purely for its looks, my mom bought me this one on my first trip to Eighth Day Books. The author’s real name was Josiah Gilbert Holland, but he also wrote under the pseudonym Timothy Titcomb. And, back in 1819, he was born on my birthday — July 24.

Though most people today haven’t heard of him, apparently in the late nineteenth century his books were really popular. He and his wife were also friends of Emily Dickinson. And, his gravestone has the inscription: Et vitam impendere vero (to devote life to truth) — what a phrase to have as the “final word” on your life.

This book is a collection of twenty-four essays, or “lessons,” so maybe I’ll just read one or two, here and there. I’m definitely curious about Lesson 22, “The Poetic Test.” It’s first line is this: The highest poetry is the purest truth.

Though I do like that first line of Little Women, I have to go with Craik on this one. 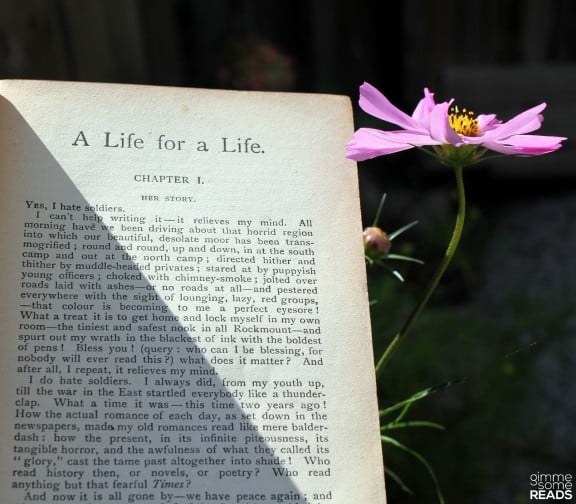 I can’t help writing it — it relieves my mind. All morning have we been driving about that horrid region into which our beautiful, desolate moor has been transmogrified; round and round, up and down, in at the south camp and out at the north camp; directed hither and thither by muddle-headed privates; stared at by puppyish young officers; choked with chimney-smoke; jolted over roads laid with ashes — or no roads at all — and pestered everywhere with the sight of lounging, lazy, red groups, — that colour is becoming to me a perfect eyesore! What a treat it is to get home and lock myself in my own room — the tiniest and safest nook in all Rockmount — and spurt out my wrath in the blackest of ink with the boldest of pens! Bless you! (query: who can I be blessing, for nobody will ever read this?) what does it matter? And after all, I repeat, it relieves my mind.

I do hate soldiers. I always did, from my youth up, till the war in the East startled everybody like a thunder-clap. What a time it was — this time two years ago! How the actual romance of each day, as set down in the newspapers, made my old romances read like mere balderdash: how the present, in its infinite piteousness, its tangible horror, and the awfulness of what they called its “glory,” cast the tame past altogether into shade! Who read history then, or novels, or poetry? Who read anything but that fearful Times?

And now it is all gone by — we have peace again; and this 20th of September, 1856, I begin with my birthday a new journal (capital one, too, with a first-rate lock and key, saved out of my summer bonnet, which I didn’t buy).

I catch a bit of Austen-sarcasm in this opening. You gotta love the introverted drama of: “spurt out my wrath in the blackest of ink with the boldest of pens! Bless you!” Brilliant.

I definitely need to reread this, so I can write a post about it. Soon.

What was your favourite first line
among your own four L books?

→Kindle-editions available here: A Life for a Life (don’t be confused by the cover), Little Women, Collected Works of Frances Hodgson Burnett, and Works of J.G. Holland.