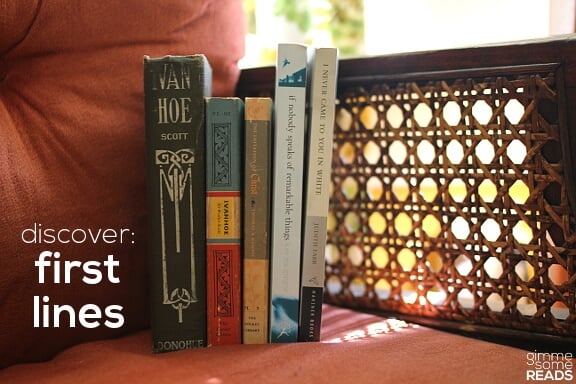 A few firsts this week, in the {First Lines} series: There are two books, which were written within the past twenty years — shocking, eh? And, two books secured my favourite first lines vote.

In that pleasant district of merry England which is watered by the river Don, there extended in ancient times a large forest, covering the greater part of the beautiful hills and valleys which lie between Sheffield and the pleasant town of Doncaster. 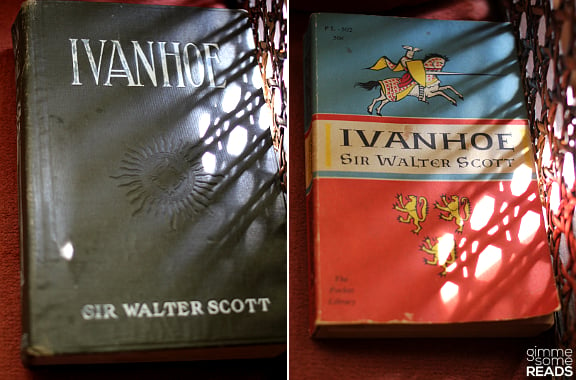 Ah, Ivanhoe. I first fell in the love with the story through the 1982 film, which I think still stands up today. Definitely worth checking out.

But I finally read the book in high school — and loved it, too. The movie did it justice, but of course, there was a lot left out. It is a long book, and as it was written in the early 1800s, you have to get used to the writing style, but as an adventure story the plot keeps you moving. Plus, Ivanhoe is a great character — an honorable hero trying to do right by everyone in a very divided and changing world.

2. The Imitation of Christ by Thomas à Kempis (originally published circa 1418-1427)

He that followeth me, saith Christ our Saviour, shall not walk in darkness, but shall have the light of life. 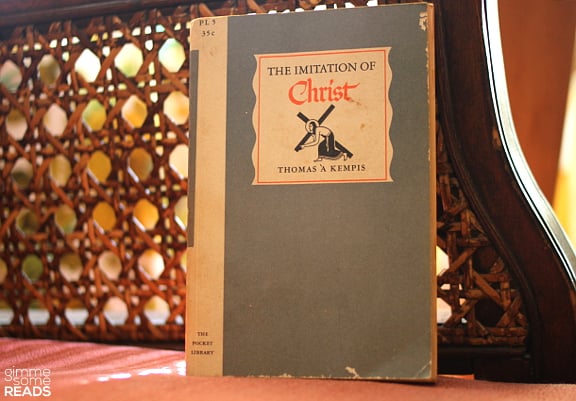 The Imitation of Christ by Thomas à Kempis | © 1959 The Pocket Library; “decorated” by Valenti Angelo

I’ve heard this book referenced a lot, but don’t think I’ve ever read it in full. I came across this sweet copy somewhere and couldn’t pass up these “decorations” by Valenti Angelo — the book actually states it’s “decorated” by Valenti Angelo. Why not illustrated? Whatever they are — they’re brilliant. 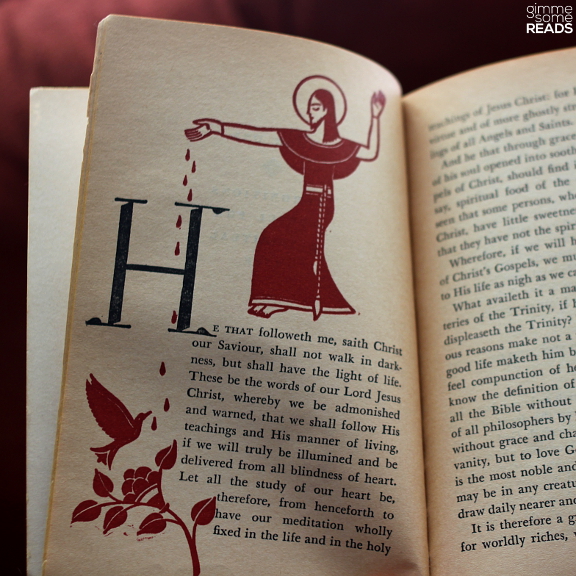 The Imitation of Christ by Thomas à Kempis; decorated by Valenti Angelo | © 1959 The Pocket Library

I do want to read this someday, in full, but its archaic language (written in the early 1400s!) makes it a little tough to get overly excited about. But one of these days, I’ll do more than just look at the pictures.

3. If Nobody Speaks of Remarkable Things by Jon McGregor (originally published in 2002)

If you listen, you can hear it. 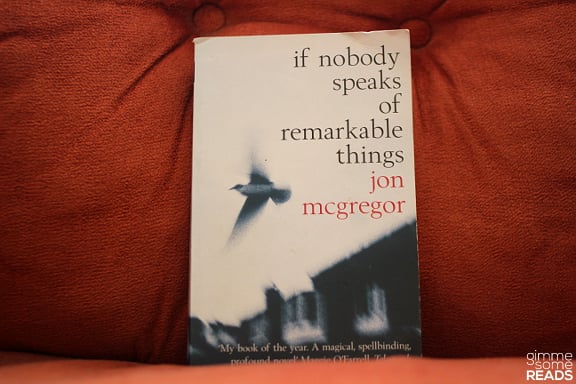 If Nobody Speaks of Remarkable Things by Jon McGregor | © 2003 Bloomsbury

Oh man. I came across this book in England last December — at one of those “leave a book, grab a book” places you come across as a traveller. The title stopped me in my tracks; the cover image probably adds to its haunting quality, but still that line — if nobody speaks of remarkable things — what an excellent beginning to a story. Immediately I think: yes, what happens if no one does? And I’m hooked.

Still haven’t read it yet, but I plan to soon. Hope the story is as good as its title.

4. I Never Came to You in White by Judith Farr

I do not, cannot, call you anything yet; I am not sure yet what you are to me. 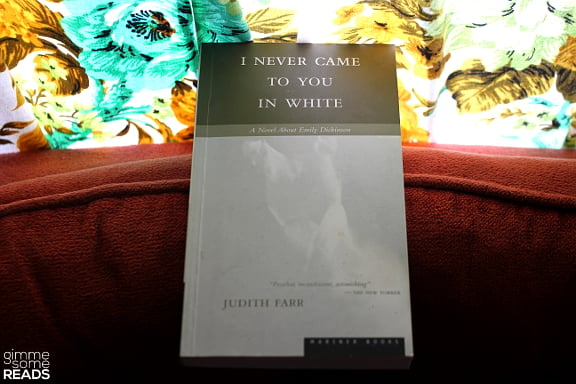 I must’ve come across this book in a bargain bin at Half Price Books or at an estate sale. Again, the title caught my eye and then I saw it was “a novel about Emily Dickinson” and I was intrigued. Still haven’t read it yet, but it appears to be a fictionalized batch of letters, which I presume tell a story.

In the Author’s Afterword, she writes:

This fiction is based, with some variation and compression, upon actual events. In the words of Emily Dickinson’s poem, I have tried to “Tell all the Truth” about her inner life, especially during her formative years at school; but I have chosen to do so in the “slant,” fictional way that she herself preferred.

As an English professor at Georgetown and the author of The Passion of Emily Dickinson, a well-regarded analysis of the poet’s life and work, I’d guess Farr has a pretty good handle on how to write a fictional Dickinson letter or two.

So, yes, the two modern books are the two first-line winners. I think I partly couldn’t choose between them because I liked them both for the same reason: their sense of poetry — both in their titles and their first lines. And, if the rest of their first pages are true depictions of the rest of the books, the poetic quality seems to be infused throughout. I look forward to reading them both.

If Nobody Speaks of Remarkable Things by Jon McGregor

If you listen, you can hear it.
The city, it sings.
If you stand quietly, at the foot of a garden, in the middle of a street, on the roof of a house.
It’s clearest at night, when the sound cuts more sharply across the surface of things, when the song reaches out to a place inside you.
It’s a wordless song, for the most, but it’s a song all the same, and nobody hearing it could doubt what it sings.
And the song sings the loudest when you pick out each note.

The low soothing hum of air-conditioners, fanning out the heat and the smells of shops and cafes and offices across the city, winding up and winding down, long breaths layered upon each other, a lullaby hum for tired streets.
The rush of traffic still cutting across flyovers, even in the dark hours a constant crush of sound, tyres rolling across tarmac and engines rumbling, loose drains and manhole covers clack-clacking like cast-iron castanets.

Something about this reminds me of the beginning of one of my favourite T.S. Eliot poems, Love Song of J. Alfred Prufrock. I don’t know where the story is going per se, but I’m ready to go wherever it wants to take me.

I Never Came to You in White by Judith Farr 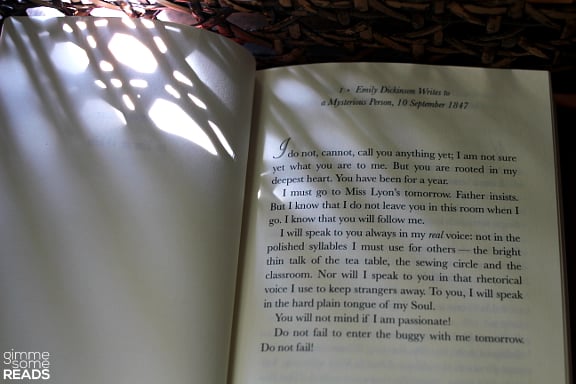 I do not, cannot, call you anything yet; I am not sure yet what you are to me. But you are rooted in my deepest heart. You have been for a year.

I must go Miss Lyon’s tomorrow. Father insists. But I know that I do not leave you in this room when I go. I know that you will follow me.

I will speak to you always in my real voice: not in the polished syllables I must use for others — the bright thin talk of the tea table, the sewing circle and the classroom. Nor will I speak to you in that rhetorical voice I use to keep strangers away. To you, I will speak in the hard plain tongue of my Soul.

You will not mind if I am passionate!

Do not fail to enter the buggy with me tomorrow. Do not fail!

Like I mentioned in my Three Autumn Poems post, I feel like Emily would be an interesting person to correspond with — she seems genuine yet dramatically imaginative. This letter, though fictional, is a perfect example. As a four on the Enneagram, I especially appreciate that bit about speaking in her real voice rather than “the bright thin talk of the tea table.” I sure hope whoever this mysterious person is, that he or she doesn’t fail to enter the buggy tomorrow.

And, speaking of Emily Dickinson…
» Don’t miss your chance to enter the Literary Sights and Smells Giveaway.
You could win a library candle set of the Emily Dickinson scent!

What was your favourite first line
among your own four I books?