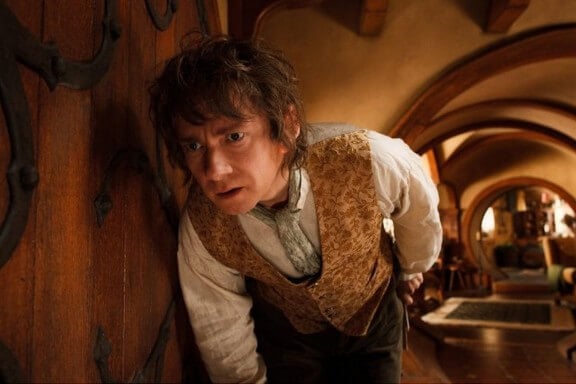 Last week, I bought my tickets to a midnight showing of The Hobbit: An Unexpected Journey  (it opens at 12:01 a.m. on Friday, December 14) and discovered it was a little more complicated than just picking a location and a time. The film is being shown in 2D, RealD 3D, IMAX 3D and High Frame Rate (HFR) 3D. Depending on what tech your local theatre uses, you’ll have up to four ways of seeing Bilbo Baggins begin his long trip toward the Lonely Mountain. Here’s a quick rundown to help you decide.

Director Peter Jackson’s suggested viewing method (and the one I chose for my ticket) is high frame rate (HFR) 3D. The Hobbit: An Unexpected Journey is the first film to use this new format. “Frame rate” refers to the number of still frames that occur in one second to give the illusion of a moving picture. The film industry long ago adopted the standard of 24 frames per second. But new advances in digital filmmaking allow for much higher frame rates. Jackson says that he wanted to make The Hobbit at 48 frames per second to better immerse people in the story and make the 3D experience more life-like and less blurry. (Our eyes can handle up to 55 frames per second.) I’m curious how different the movie-going experience will be with the higher frame rate. I do love the cinematic quality of 24 fps and sometimes get annoyed with HDTV’s over-crispness; I’m not sure how I’ll handle the ultra-detail of HFR 3D. But I’m a sucker for The New Thing, and have to find out for myself.

See it in HFR 3D if you’re curious like me, an early adopter who has to be first in line for new tech, or have always wanted to feel like you were really in Middle Earth. See if your theatre has HFR 3D here.

The Hobbit: An Unxpected Journey is also shown in IMAX 3D. IMAX theatres are fitted with proprietary floor-to-ceiling curved screens and have a specific seat layout designed to make you feel like you’re in the middle of the film (the screen takes up your entire field of view…and maybe more) . IMAX 3D is known for its ability to make images look like they are popping out of the screen toward you.

See it in Imax 3D if you love the feeling of being in the middle of a movie and can’t get enough of the “it’s right in front of me” effect. See if you have an IMAX 3D showing in your area here.

RealD 3D is the “normal” 3D experience offered at most big cineplexes. The 3D digital projection is known for pictures that look deep, like the action is extending out behind the screen’s plane. You’re probably already familiar with the sunglasses-style 3D eyeware and the way 3D (when done well) can increase the immediacy of the film’s world.

See it in RealD 3D if you like the immersive 3D experience but also want to be able to easily see the edges of the screen (good for people who are interested in artistic composition more than feeling like they are inside the screen). See if RealD 3D is at your local theatre here.

This is movie-going for film purists, and will be available at theatres everywhere.

See it in Classic 2D if you like the look of 24 frames per second and don’t want to change it, thank you very much, or aren’t a big fan of 3D.

How will you see The Hobbit: An Unexpected Journey?

Enter the Gimme Some giveaways (New Hobbit giveaways below)!