{new on dvd} Safety Not Guaranteed

You should know that Safety Not Guaranteed is not really about time travel. At least not in the way that Back to the Future or Primer is about time travel.  Safety is more about love…the kind of time-travel that’s available to us all. Meaning that love is able to transform the way we experience the-past-in-the-present almost as well as if we actually flux-capacitor-ed away our regrets.

And, oh, these characters have regrets. Darius (Aubrey Plaza) is an anti-social magazine intern still grieving her mother’s years-past death. Jeff (Jake Johnson) is her boss, a cynical writer still pining after his high-school girlfriend.  Jeff sets out on a quest to reconnect with said woman, under the guise of writing a story about this intriguing classified ad:

The placer of the ad, Kenneth (Mark Duplass—the man was in so many movies this year!), eventually reveals to Darius that his time-travel missions are based in regret as well. The only character without a reason to want to change the past is the charmingly innocent intern Arnau (the scene-stealing Karan Soni), who has led such a nose-to-the-grindstone existence that he hasn’t had time to accumulate any regrets. Which is a regret in itself, of course.

Screenwriter Derek Connolly and director Colin Trevorrow create early empathy with these less-than-perfect characters by letting us see their defense mechanisms plainly. Darius deadpans and deflects. Jeff bosses and brags. (“Tell me about your life,” his old flame says after hearing about his job, car and condo. “I just did,” Jeff replies.) Kenneth speaks in over-the-top agent jargon and puts himself through obstacle courses in the woods. Arnau just tries to avoid engagement with anything other than his gaming laptop…and Darius…at all costs.

The movie moves along with an ease that only comes with a whole lot of work by Connolly and Trevorrow. The plot advances as Darius (undercover as a potential time-travel partner) gains Kenneth’s trust, and the team discovers there’s a whole lot more to his story than they first thought. Along the way, they are each forced to face their regrets and learn to live in the present, time-travel be damned.

And therein lies the movie’s message. When Kenneth quizes Jeff at the beginning of the film, “Have you ever stared fear and danger in the eye and said ‘Yes?'”, the film is asking us the same thing…but the “fear and danger” lies in choosing the present and choosing to love. Each character is faced with those choices as the film progresses to its climax. 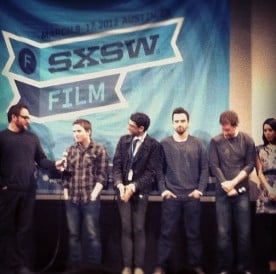 Speaking of which…I was fortunate enough to first see Safety Not Guaranteed at the SXSW Film Festival in a packed theatre with the cast & crew in attendance. It was one of my favorite movie-going experiences ever. I don’t know how the film’s ending will play in your own living room, but I hope it’s something like what happened in Austin. People were literally on their feet, pumping their fists in the air and cheering. Out loud. And that’s all I’m going to say about that. Except that the film was just as good the second time. Who says you can’t go back?

Good for: Secretly sentimental sci-fi fans and people who like comedies with heart

Invite your: Most likely time-travel buddy

Bring your: Star Wars figurines and lasers (both figure into the plot)

Skip if: Your ears bleed at just the mention of time travel…but, seriously, I can’t think of very many people who will not at least marginally love this movie

To ask a question posed in the film, what would you go back for?

8 comments on “{new on dvd} Safety Not Guaranteed”