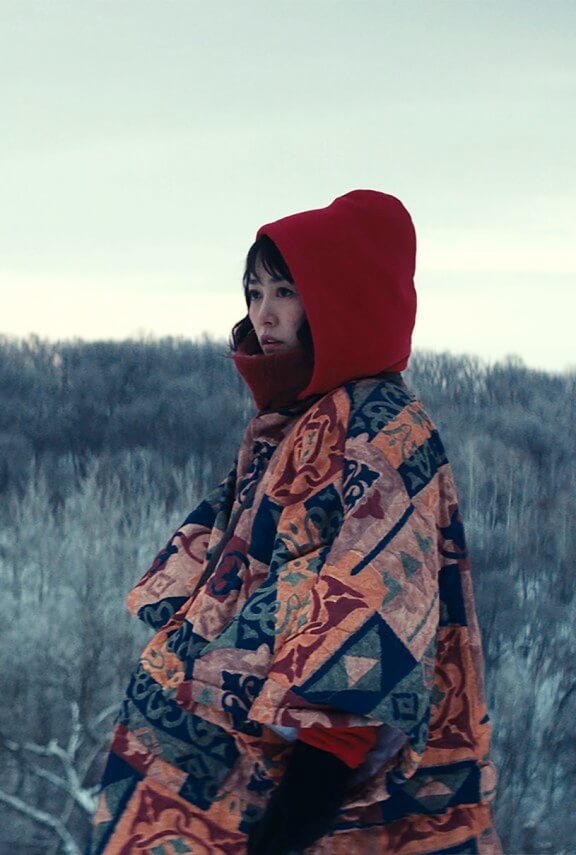 Gimme Some readers, sometimes it takes a great movie a long time to make its way to us. I saw Kumiko, the Treasure Hunter in January 2014, at Sundance, and it is finally—finally—coming to art houses this month.

Kumiko the Treasure Hunter is a small film (small budget, small cast, small story) that makes a very big statement about the Truth found in fiction.

Rinko Kikuchi (Babel, The Brothers Bloom, Pacific Rim) plays Kumiko, a loner Japanese office worker obsessed with an old VHS tape she discovers. Film lovers will recognize the Coen Brothers’ Fargo in the tape’s skips and starts, but Kumiko views the footage as a real-life video treasure map to snow-hidden loot. So she embarks on a quest to find this cache of money that doesn’t actual exist…or does it?

The film works simply as an imaginative story with a complex lead character. But if you dig a little through the drifts, it also has a lot to say about the ability of good stories to make their way into our Realities.

I’ve been thinking about this lately: Often, when I’m searching for answers, I end up thinking about a solution or direction presented by a film, TV show or book.  My practical Iowa farmgirl voice immediately jumps in to opionate: “Sarah. Seriously. Those stories aren’t real. You gotta find answers in reality.”

Then my writer and filmmaker voice counters: “But maybe these stories are realer than real. They’re created by real people who are looking for answers, just like me. And their stories are those answers…or at least a start to them.” And I remember how stories have comforted, challenged, confirmed and changed me before. I believe they will again.

So I turn back to Kumiko. I watch another episode of The Honourable Woman to think about the consequences of secrets. I devour Marilynne Robinson’s newest, Lila to remember how grace can come to even those who don’t believe in it. I obsess over the newest issue of Saga and its irreverent reverence for familial love.  I pray that Advantageous, one of my favorites from Sundance 2015, gets picked up for distribution so we can talk about its argument for women’s power together here. I sign up for the Movies and Meaning  Festival (May 28-31 in Albuquerque…only 300 tickets available…get yours quick) because I’m hungry for more.

And I embrace this: Storytellers are my cartographers, my mapmakers, my guides. With Kumiko, I flip up my hood and follow them into life’s blizzards, sure that together, we’ll find what we’re looking for.

What stories have you followed in your search for answers?

One comment on “March in Movies: Treasure hunting for answers”