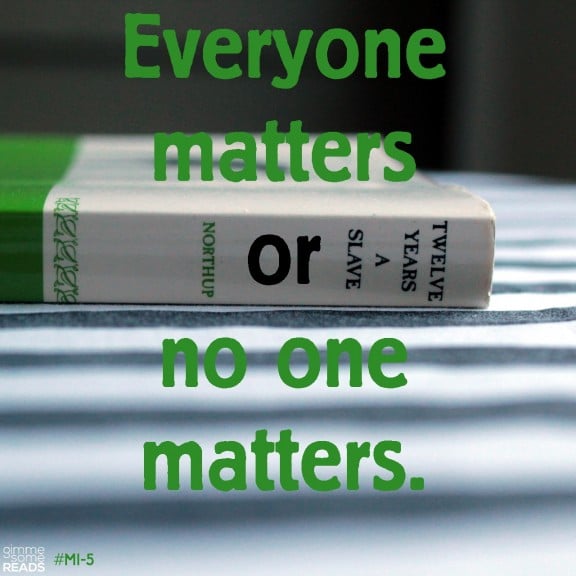 “Everyone matters or no one matters,” Adam Carter declares during an episode of the BBC show, MI-5, which I happened to rewatch in the midst of reading Twelve Years a Slave. I remember being struck by the line when I saw the episode the first time, but in the light of Solomon Northup’s real life struggles, its truth struck me even more sharply this time.

This is the attitude that Solomon seemed to choose throughout his life — whether he was considering himself, slaves, or slave owners.

Here are just a few passages that particularly caught my attention in Solomon’s personal narrative.

Upon leaving the slave pen in Washington, DC, to be sold elsewhere (p. 34):

So we passed, hand-cuffed and in silence, through the streets of Washington — through the Capital of a nation, whose theory of government, we were told, rests on the foundation of man’s inalienable right to life, LIBERTY, and the pursuit of happiness!

His thoughts on his first “master” William Ford, show Solomon’s astute understanding as well as his graciousness of heart (p. 62):

The influences and associations that had always surrounded him, blinded him to the inherent wrong at the bottom of the system of Slavery. He never doubted the moral right of one man holding another in subjection. Brought up under other circumstances and other influences, his notions would undoubtedly have been different. Nevertheless, he was a model master, walking uprightly, according to the light of his understanding, and fortunate was the slave who came to his possession. Were all men such as he, Slavery would be deprived of more than half its bitterness.

There have been hours in my unhappy life, many of them, when the contemplation of death as the end of earthly sorrow — of the grave as a resting place for the tired and worn out body — has been pleasant to dwell upon. But such contemplations vanish in the hour of peril. No man, in his full strength, can stand undismayed, in the presence of the “King of Terrors.” Life is dear to every living thing; the worm that crawls upon the ground will struggle for it. At that moment it was dear to me, enslaved and treated as I was. 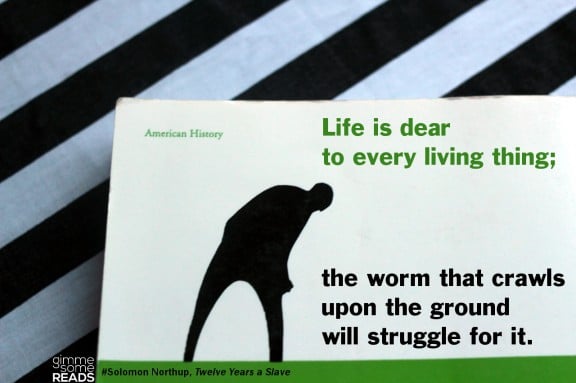 His reflections on the effects of the institution of slavery (pp. 157-158):

The existence of Slavery in its most cruel form among them has a tendency to brutalize the humane and finer feelings of their nature. Daily witnesses of human suffering — listening to the agonizing screeches of the slave — beholding him writhing beneath the merciless lash — bitten and torn by dogs — dying without attention, and buried without shroud or coffin — it cannot otherwise be expected, than that they should become brutified and reckless of human life…There may be humane masters, as there certainly are inhuman ones…nevertheless, the institution that tolerates such wrong and inhumanity as I have witnessed, is a cruel, unjust and barbarous one. Men may write fictions portraying lowly life as it is, or as it is not — may expatiate with owlish gravity upon the bliss of ignorance — discourse flippantly from arm chairs of the pleasures of slave life; but let them toil with him in the field — sleep with him in the cabin — feed with him on husks; let them behold him scourged, hunted, trampled on, and they will come back with another story in their mouths. Let them know the heart of the poor slave — learn his secret thoughts — thoughts he dare not utter in the hearing of the white man; let them sit by him in the silent watches of the night — converse with him in trustful confidence, of “life, liberty, and the pursuit of happiness,” and they will find that ninety-nine out of every hundred are intelligent enough to understand their situation, and to cherish in their bosoms the love of freedom, as passionately as themselves.

In the midst of a somewhat rowdy argument, to find such a poetic line as that last question — so simply and eloquently getting right at the heart of things, I was surprised into stopping for a moment to consider. 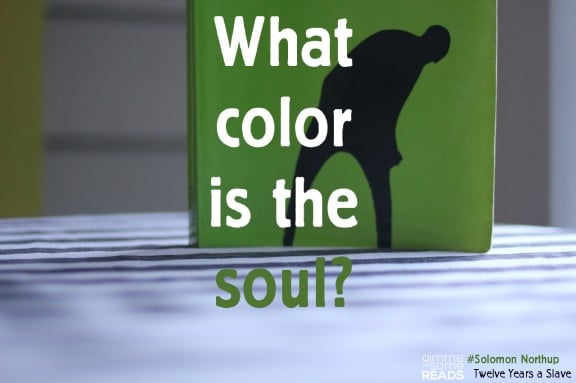 » Read more about the book: Twelve Years a Slave
» Read a review of the film adaptation.

What passages or lines stood out to you?