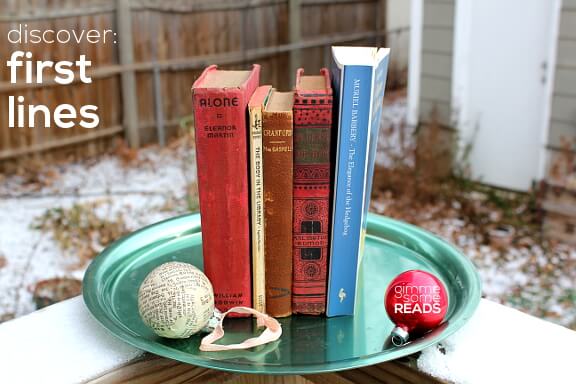 I began this {Discover: First Lines} series back in August to shake up my preconceived notions a bit — and remind myself of all the books on my shelves! 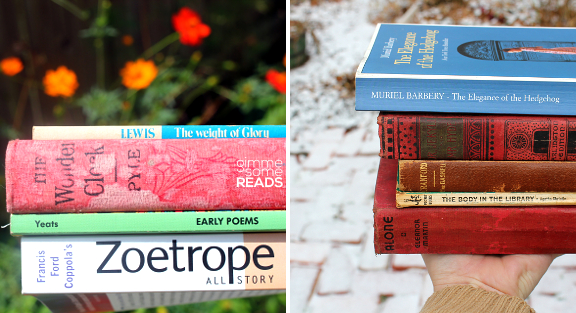 Besides the fact that at the beginning my garden was verdant and full of flowers and now is covered with a dusting of snow, I’ve learned several things along the way:

These aren’t groundbreaking realizations per se, but somehow this tiny journey of discovery has led me to wake up a little and look for inspiration where I don’t expect to find it — or at least save a little room for inspiration to find me. And one or the other is bound to come up with something good.

Since the end of the year is approaching fast and the holiday season is upon us, I decided to wrap up this First Lines series with one book for each of the last five letters of the alphabet: A-E. And, this time I’ll actually share them in alphabetical order.

I almost got to close the series with an all woman cast, but Mr. Stevenson snuck into the lineup. So, to mix things up even more, instead of picking a favourite this time I’ll share the first four sentences of each book.

I wake up out of the darkness. My eyes open to the blank ceiling. Brightness…shadow…unpatterned sensation. I cannot remember why I am here. 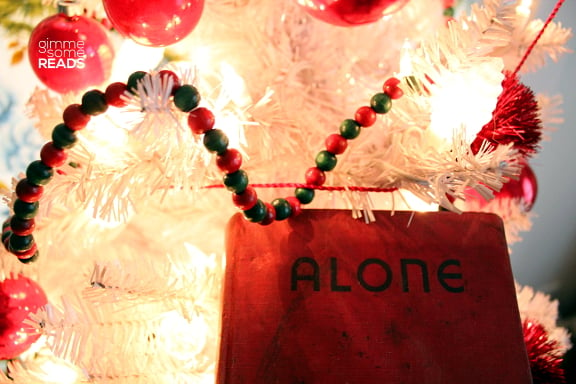 This is a recent estate sale find. The title — Alone, stark on the red cloth — grabbed my attention from the across the room. But, it was the fly leaf page that solidified my purchase. A brief write up states:

This is the authentic story of a girl of cultivated taste who, by the death of her father, is forced to face life alone at the very beginning of the worst depression in history…the publication of her true story focuses our attention on a vital, contemporary problem: The problem of the many thousands of decent, educated girls who are denied, by economic circumstances, the happiness and security which they had been led to believe was their rightful heritage.

Woah. Add that intro to the first few lines, and I am doubly intrigued.

2. The Body in the Library by Agatha Christie (originally published in 1942)

Mrs. Bantry was dreaming. Her sweet peas had just taken a First at the flower show. The vicar, dressed in cassock and surplice, was giving out the prizes in church. His wife wandered past, dressed in a bathing suit, but, as is the blessed habit of dreams, this fact did not arouse the disapproval of the parish in the way it would assuredly have done in real life. 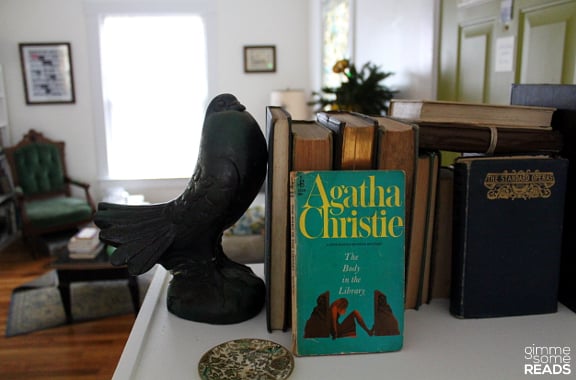 The Body in the Library by Agatha Christie | Pocket Books © 1968

I have yet to read a Miss Marple mystery, but I have watched multiple film versions and loved them. I love the fact that Christie saw fit to create an unexpected detective like Marple. The Body in the Library is the second of the twelve Marple novels. At some point, I want to read them all in order, but for now, I think I’ll put this on my to-read-over-Christmas-break list.

In the first place, Cranford is in possession of the Amazons; all the holders of houses, above a certain rent, are women. If a married couple come to settle in the town, somehow the gentleman disappears; he is either fairly frightened to death by being the only man in the Cranford evening parties, or he is accounted for by being with his regiment, his ship, or closely engaged in business all the week in the great neighboring commercial town of Drumble, distant only twenty miles on a railroad. In short, whatever does become of the gentlemen, they are not at Cranford. What could they do if they were there? 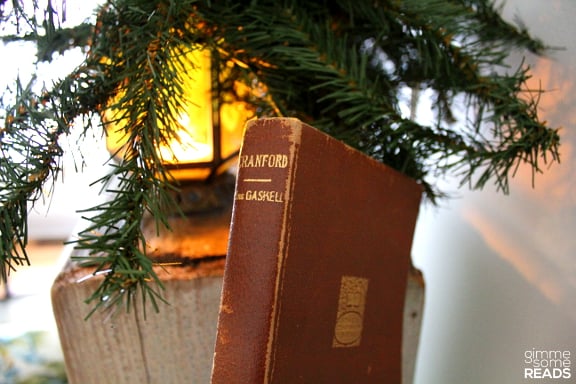 Another book that I have watched the film adaptation of, but not yet read. These opening lines cracked me up, and definitely increased my desire to actually sit down and read this. I enjoyed the recent BBC miniseries, but am intrigued to become better acquainted with Gaskell’s actual writing, rather than simply her ability to create a good story. I appreciate that she begins with that exceptional British wit.

Mr. Utterson, the lawyer, was a man of a rugged countenance, that was never lighted by a smile; cold, scanty and embarrassed in discourse; backward in sentiment; lean, long, dusty, dreary, and yet somehow lovable. At friendly meetings, and when the wine was to his taste, something eminently human beaconed from his eye; something indeed which never found its way into his talk, but which spoke not only in these silent symbols of the after-dinner face, but more often and loudly in the acts of his life. He was austere with himself; drank gin when he was alone, to mortify a taste for vintages; and though he enjoyed the theater, had not crossed the doors of one for twenty years. But he had an approved tolerance for others; sometimes wondering, almost with envy, at the high pressure of spirits involved in their misdeeds; and in any extremity inclined to help rather than to reprove. 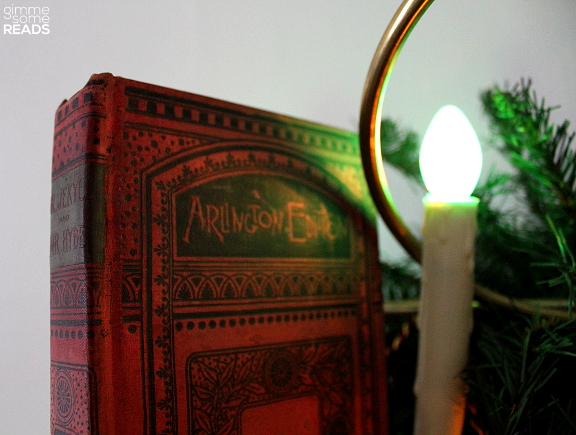 If I had to pick a winner of a first line from this batch, it’d likely be this one. What an introduction to a character — so much packed into one sentence! Apparently I don’t know much about this story, because I have no idea who Mr. Utterson is (shhh, don’t tell). I’ve never read this story, but because I have long known the basic premise — or at least, thought I did — I’ve kind of written it off as an unnecessary-to-read classic. Not my cup of tea, I thought. But this beginning has changed my mind.

I’m also intrigued by this version the BBC made a few years back, the story of a descendent of Jekyll in modern times:

5. The Elegance of the Hedgehog by Muriel Barbery (originally published in 2006)

“Marx has completely changed the way I view the world,” declared the Pallières boy this morning, although ordinarily he says nary a word to me. Antoine Pallières, prosperous heir to an old industrial dynasty, is the son of one of my eight employers. There he stood, the most recent eructation of the ruling corporate elite — a class that reproduces itself solely by means of virtuous and proper hiccups — beaming at his discovery, sharing it with me without thinking or ever dreaming for a moment that I might actually understand what he was referring to. How could the laboring classes understand Marx?

The Elegance of the Hedgehog by Muriel Barbery | Europe Editions © 2009

I read this with my book club, and was utterly surprised by how much I liked it. A quirky story that can be slow, annoying, frustrating, and confusing (as in — where is this going??), there were also moments where I laughed out loud, teared up, and was awed by the perfection of a phrase. I’ve suggested this book to several people and heard back mixed reviews — so it’s certainly not a fit for everyone, but it’s worth a chance. Oh — and, you may need to have your dictionary handy. Barbery (and/or her translator, Alison, Anderson) has a top-shelf vocabulary.

I haven’t yet watched the film version that came out recently, but the trailer looks like they may have pulled it off well:

And, just for fun, here are all sixteen sets of books featured in the Gimme Some Reads first lines series.

Over a year ago, Ali decided to expand the world of Gimme Some Oven to include Film, Life, Reads, and Style, and invited me on as the Reads blogger. I’ve enjoyed writing for the Gimme Some team and getting to interact with you readers over the last year; however, this will be my last post as the main Reads writer.

The good news is, it’s not the end of Gimme Some Reads! There are plenty of fun changes brewing for the Gimme Some network for 2014, so be sure to follow along with the team on Facebook.

And, if you want to check in with me every now and then, hop over to my Everyday Poetry blog, which I’ll be updating more regularly. Cheers!

Thank you for reading!
Merry Christmas!